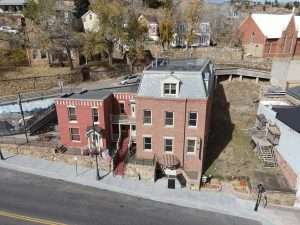 Mayor Fey led the Pledge of Allegiance and then asked for any amendments or additions to the agenda. There were no changes.

The Mayor called for a motion to approve the consent agenda which consisted of the minutes from the October 20 meeting and regular bill lists through October 20.

Mayor Fey asked about the bill for the water main repair for $24,666.40 and whether that was all of it, or just partial. Manager Miera responded that the bill covers the entire incident.

Council considered approval upon the second reading of one Ordinance.

Director Rears reviewed Ordinance 20-12 which would amend Article V of Chapter 11 of the Municipal Code regarding special events and demonstrations. This Ordinance would also terminate the Emergency Order 20-03 which put a moratorium on all street closures.

Mayor Fey stated that the issue came about because an event producer wanted to do a show over the Labor Day Weekend and several businesses were not happy with their notification timeline and requested a change. Fey said he worries that “every time a business owner complains that Council would legislate the complaint.” For this reason, he will be voting no.

Mayor Fey opened the Public Forum and no one chose to speak to council.

Alderwoman Laratta moved to approve Ordinance 20-12 and was seconded by Alderwoman Johnson. The Ordinance passed four to one with Mayor Fey voting against.

Director Rears introduced Resolution 20-40 which would amend the Comprehensive Fee Schedule to match the fee and deposit structure outlined in Ordinance 20-12 regarding special events. This Resolution is necessary assuming Ordinance 20-12 is passed.

Alderwoman Laratta commented, “I hope we have a lot of business and make a ton of money,” to which Mayor Fey responded, “Amen!”

Mayor Fey then asked if the event deposit paid by applicants is refunded in full or can it be refunded in part if labor or other fees are required at the end of the event? Director Rears stated the City would only charge what it would cost them to clean or repair after an event.

Manager Miera introduced Resolution 20-41 which would extend the local declaration of emergency through Wednesday, November 18, 2020.

Alderwoman Laratta moved to approve Resolution 20-41 and was seconded by Alderman Aiken. The Resolution passed unanimously.

Mayor Fey announced the first unofficial results for the Central City election on Council Seats. He first congratulated Alderman Aiken for retaining his seat and then Alderwoman-elect Kara Tinucci.

Mayor Fey adjourned the regular meeting at 7:42 pm. The next regular Council Meeting will be on Tuesday, November 17, 2020.