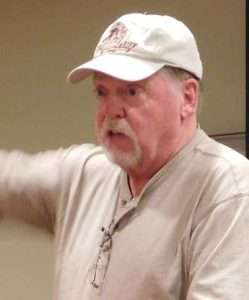 The Central City Council met with Staff on June 29, 2017, for a work session prior to a special council meeting. Mike Garner with Michael Baker International presented the Disaster Resiliency and Recovery Master Plan to the Council for their decision to either go forward to public forum or to rework it before handing it over to a vote. One hundred percent of the funding for the plan came from a grant awarded to the City for this purpose. The plan covers more than 100 “what if” disaster scenarios from economic collapse to wildfires and the City’s response to them in the short, medium, and long terms to ensure the City will survive.

When asked if anyone had any conflicts of interest with any item on the agenda, Alderman Jeff Aiken stated he might have one with the appointment of Jeff Hentschel as he has a relationship with him and will recuse himself from that item (#10) on the agenda.

The Mayor called for a motion to approve the consent agenda which consisted of the minutes from the June 13 meeting and regular bill lists through June 6. Alderwoman Voorhies moved to approve the Consent Agenda except for two items on the bills list and was seconded by Alderwoman Laratta. Voorhies questioned the check to Michael Garner for the disaster plan as it was 100% funded through a grant. Manager Miera responded that the grant is a reimbursement of expenses and the City will get reimbursed for that money. Voorhies questioned another related expense that was also covered by the same grant. When called to a vote, the original motion and one to cover the two exempted items passed unanimously.

Modifying Liquor Areas at The Reserve

The Council recessed and convened as the Liquor License Authority to consider The Reserve Casino’s request to modify their liquor licensing by increasing the general liquor premise to include Jan’s Tavern and decrease the Lava Room premise. Joe Behm representing Gregory Gaming LLC addressed the council regarding the change. The business intends to have events in the Lava Room more frequently than the previous owners and the division of licensing creates unnecessary work and red tape for each event. When asked if they would need to change the license again when the new owner rebrands, Attorney Guckenberger responded that if the corporate entity does not change, they do not have to go before the Liquor Licensing Authority. Behm announced to the Council and the public that they will be rebranding The Reserve Casino to The Grand Z. The request was approved unanimously.

Attorney Guckenberger reviewed the second reading of Ordinance 17-05 which would extend the 180-day temporary suspension of new marijuana licensing through November 30, 2017. During public forum, resident Jeremy asked if retail and medical marijuana is all they are intending to do as “there is no place for tourists to smoke.”

Alderwoman Voorhies moved to approve the second reading of Ordinance 17-05 and was seconded by Alderman Aiken. Alderman Aiken clarified that during the suspension, they would not entertain other types of licenses. Manager Miera reminded the Council that they can discuss other uses during the suspension and the Code can be changed if that’s the direction they want to go. The Ordinance passed unanimously.

The Council next entertained three applications to fill three vacancies on the Main Street Commission. Two of the applicants previously served and were requesting appointment to new terms and the third applicant would be new to the Commission as an alternate. The incumbents were Deborah Wightman and Cher (Cherise) Rainbolt. The Council had no grievances and reappointed both to their posts. The third applicant, Chuck Webster, is well known around Central City, and the Council appointed him as alternate.

The next item was the ratification of an applicant, Jeff Hentschel, to the Business Improvement District (BID) board. The Council does not select, appoint, or vote on members, but per state statute, they must ratify the decision made by the existing board members. Jeff Hentschel chose to address the council. Hentschel thanked the Council for their consideration of his ratification and also thanked them for their work on the Free-Play proposal “putting numbers to paper.”

Alderwoman Voorhies moved to ratify Jeff Hentschel to the BID and was seconded by Alderwoman Laratta. The motion passed with four votes in favor. Alderman Aiken had recused himself due to his relationship with Mr. Hentschel.

Director Rears introduced Resolution 17-18 which would ratify the Planning and Zoning Commission’s approval of the City’s 2017 Comprehensive Plan. The Comprehensive Plan provides direction and purpose for the City in development and economics over the next decade. The 2017 Plan has been constructed over the last three years using several sessions of public input as a guide.

Alderwoman Voorhies moved to approve Resolution 17-18 and was seconded by Alderwoman Bell. The motion passed unanimously. The text of the Comprehensive Plan can be found on the Central City website.

Director Rears next introduced Resolution 17-19 which would approve the Central City Design Guidelines. This was funded through a DOLA 50/50 match grant. The Design Guidelines have four critical goals: to keep existing historic buildings from demolition due to disrepair; to improve building occupancy and grow the economy; to modernize and maintain structures for sustainability; and to balancing Victorian era preservation with modern demand.

Mayor Heider asked her fellow council people to delay action on the historic guidelines tonight. This is “serious stuff” and would she would like to have more time to review the changes in depth, in part to maintain the integrity of the plan and the decision they must make. Alderwoman Bell, who sat on the plan committee, was ready to vote, but understood the need for more time. Bell said, “Even after they adopt it, they have the flexibility to change it.” Alderman Aiken was also ready to adopt the plan. Mayor Heider responded that the plan “is a very thick book” and thinks it is necessary to take more time to understand it all.

Alderwoman Voorhies moved to table Resolution 17-19 until July 18, and was seconded by Alderwoman Laratta. The motion passed three to two with Bell and Aiken voting opposed. The text of the Design Guidelines can be found on the Central City website.

The Land of Development

Todd G. Messenger of Fairfield and Woods P.C., addressed the Council explaining how they had to introduce modern technology development into the code per the SCC. These would include cell tower construction and telecommunications infrastructure. The Code will allow new uses to open up in existing buildings with greater ease. “If you wanted to open up a coffee shop in downtown Central City” you won’t have to get up in front of two governing bodies to speak, but instead, “you can go directly to Ray (Director Rears)” to get your permit. They have made changes to allow for recreational development in line with the Comprehensive Plan adopted tonight.

Alderwoman Voorhies moved to approve the first reading of Ordinance 17-06 setting the public hearing and second reading on July 18, 2017 or later, and was seconded by Alderwoman Laratta. The motion passed unanimously. The text of the Land Development Code can be found on Central City’s website.

Manager Miera informed that Council that since this is a special meeting, no staff reports were provided.

Alderman Laratta commented, “Our flowers are beautiful and they are more beautiful than Black Hawk’s. Have you seen the scrawny things they put up?”

Mayor Heider gave kudos to Alderwoman Voorhies for coordinating the Madame Lou Bunch Day. The Mayor also stated that the annual Yellow Rose Ball and Flower Girl Presentation of the Central City Opera was fantastic. She asked if the conflicting dates of the Ball and the Stills in the Hills event could be on differing days next year. She added that the Yellow Rose Ball has been scheduled the fourth week in June since its inception to coincide with the blooming of the Cornish yellow rose bushes. Manager Miera responded that the BID is talking about that same thing and looking ahead to next year’s calendar, the Stills event may be moved.

Barbara Thielemann spoke to the Council on behalf of Main Street Central City thanking them for their reinstatement of Deborah and Cher and the appointment of Chuck as an alternate to the Commission.

Resident Larry Bartlett next spoke to the Council regarding Alderwoman Mary Bell. Bartlett complemented Bell as the voters’ voice and encouraged her to be strong. Speaking to Alderwoman Bell, Bartlett said, “I would like to remind all that you won your council position by a landslide,” and he added that “we expect Council to show respect for our candidate and to hear us through you. Be strong and know we are behind you with all our tools.”

Karen Bartlett had signed up to speak, but withdrew her name.

Resident Harry Nimrod informed the Council that somebody has made a road going up the hillside next to the old Mack Brewery creating a makeshift bridge to get over the drainage ditch. “I am really concerned about the erosion and the unsightly sight of this road; it’s used quite a bit,” said Nimrod.