Central City goals for a better city and brighter future 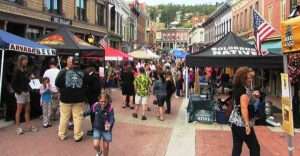 Work session with the Business Improvement District Board

Representing the Business Improvement District (BID) were the BID board members headed by Executive Director Joe Behm along with the General Manager of the Reserve Casino Hotel, Shannon Keel.

Joe Behm opened the work session with a proposed agenda and presentation by the BID. Mayor Ron Engels interjected his clarification that the Council does not direct or take action during a work session and they can only make formal decisions during a Council Meeting. The BID’s agenda included economic indicators, joint shuttle discussion, gateway signage, infrastructure, and policy.

The economic overview of Central City has been trending down since 2008 and shows no signs of leveling off. One BID board member described the economy as being flushed down the hill to Black Hawk. The average daily traffic on the Central City Parkway has decreased from 3,500 vehicles per day to 1,500 currently. The BID proposed an intergovernmental agreement with Black Hawk to create a single shuttle program between the two cities. Mayor Engels pointed out that it was Black Hawk that pulled out of the original Transportation Authority forcing Central City to develop their own shuttle system. Manager Miera added that the City has been working to cut costs and keep their shuttle program both efficient and viable.

It was at this point that Brad Snedeker, whose residency is outside Gilpin County, expressed his desire to share his opinion about the topic. When he was informed that this is not the time for public comment, Snedeker asked “doesn’t the charter say the public gets to participate in a work session?” Mayor Engels responded saying the public does not comment during a work session and Manager Miera followed saying that while the work session is open to the public, the public is given a forum during Council Meetings and special meetings for that purpose. The work session is not designed for that purpose. Snedeker countered saying this is what happens at a work session; a question is asked and someone is directed to research and answer the question, but the public never gets to hear the response. Joe Behm asked Council what the policy was for calling security during a meeting, but Miera stepped in and offered to meet with Snedeker after the meeting to answer any of his questions. Miera followed saying this dialogue is no longer productive and asked to “please allow us to get on with the meeting.”

A short discussion between the Council and the BID continued on the issue of a joint shuttle venture with Black Hawk which ultimately ended in statements of distrust between the government agencies. Behm offered that time heals old wounds and perhaps this would be a baby step into the healing process.

Behm turned the meeting over to Shannon Keel, GM of the Reserve Casino Hotel. Ms. Keel presented several mock-ups of signage ideas including welcome arches at both ends of the city, an electronic sign at the base of the Parkway visible to I-70 traffic, and a Hollywood style sign along a retaining wall which could be seen from multiple vantage points of people travelling west on I-70.

Behm took over to address the infrastructure of the town and provided a nighttime picture of Larimer Square in downtown Denver to encourage a new vision of Central’s Main Street. During this discussion, Alderman Judy Laratta championed the idea of re-routing traffic down Main Street and getting rid of the “Do Not Enter” sign. Mayor Engels referred to several past studies that would make a simple reversal challenging and would limit the size of vehicle able to traverse a particular turn. Alderman Gloria Gaines was verbally supportive of the idea, but encouraged Alderman Laratta to look at the bigger picture.

Alderman Gaines complemented Shannon Keel on the ideas presented and stated that she is in support of many of them. Gaines also gave warning that CDOT is planning on expanding I-70 at Floyd Hill to three lanes as their next major project to help clear traffic congestion, and they project that it will be at least a six-year project. Gaines ominously added “If we don’t do something about signage before CDOT begins Floyd Hill, we are dead in the water.”

As the meeting concluded, Mayor Ron Engels exclaimed that it was the consensus of the Council that “this has been a very good conversation” and much of what was talked about are things they are considering moving forward with. The Council set a goal of meeting back with the BID no later than early April to continue working together toward the City’s future.

END_OF_DOCUMENT_TOKEN_TO_BE_REPLACED

Where the dead get to tell their story By Jaclyn Schrock On Saturday, August 21, the Gilpin Historical Society held their annual Cemetery Crawl. Tickets allowed the shuttle of hundreds of guests from the Teller House parking lot to the Cemetery. Depending on v... END_OF_DOCUMENT_TOKEN_TO_BE_REPLACED