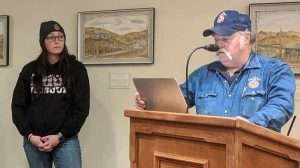 Council met with Staff for a work session prior to the regular meeting. The topics of discussion were logistics of hospitality marijuana, a 15-minute loading zone in front of the new Mayor Willies Coffee and Doughnut House, and other miscellaneous outstanding work session topics including the current state of fire suppression systems in the City.

Mayor Fey led the Pledge of Allegiance and then asked for any amendments or additions to the evening’s agenda. A presentation by the Central City Fire Department was added to the agenda.

Introduced by Chief Gary Allen, the fire department presented a 25-minute video compilation of training exercises and incidents from the 2019 year set to a variety of music. The time stamps on many of the pictures conveyed the reality of being available and ready to respond at all hours of the day and night. Central’s fire department not only responded to local incidents, but also assisted on several major incidents outside the county from wildland fires to vehicle fires. Thousands of volunteer hours were worked by the department.

The Mayor called for a motion to approve the consent agenda which consisted of the minutes from the January 21 meeting and regular bill lists through January 24. Alderwoman Laratta moved to approve the Consent Agenda and was seconded by Alderman Aiken. Alderman Hidahl asked about a payment to Deere and Ault Consulting for $38,422. Manger Miera responded that there were several delayed invoices from the company, and they were all paid at one time. The motion passed unanimously.

Mayor Fey opened the floor to the public for anyone who wished to speak to a topic on the night’s agenda. One person chose to address council.

Barbara Thielemann addressed council regarding Resolution 20-10 and the Belvidere Theatre. Thielemann spoke in favor of passage of the amendment referring to the potential use and possible revenue the building could bring.

Director Rears introduced Resolution 20-08 which would approve a services agreement with Slate Communications for marketing and communications services for the purpose of increasing tourism. The total cost of the project is $64,925 and the City received a grant from the Colorado Tourism Office in the amount of $25,000 for the project so the total cost to the City is $39,925. There were nine companies that submitted a proposal and after careful review and interview, Staff chose Slate Communications. The expense was included in the 2020 Budget.

Alderman Hidahl commented that the contract doesn’t seem to have any termination clause other than non-performance without definition of the term. Manager Miera responded that the City would be the determining factor for non-performance. Director Rears stated that the City does not pay a full amount up front, so they have some control over ensuring a project is finished. Attorney McAskin commented that he is assuming, and he will need to check with his office, that the terms of the contract must follow the terms of the grant which could have additional termination provisions.

Alderman Aiken moved to approve Resolution 20-08 and was seconded by Alderwoman Laratta. The motion passed unanimously.

Director Rears introduced Resolution 20-09 which would award work associated with the Central City Trails Master Plan to Logan Simpson Design Inc with a not-to-exceed amount of $63,787. A grant agreement between the City and the state board of the Great Outdoors Colorado Trust Fund would reimburse $47,800 of the cost, so the cost to the City would be about $15,000. There were five companies that submitted proposals. The expense was included in the 2020 Budget.

Alderman Hidahl commented he supports connecting to the Black Hawk trails system and efforts to preserve the Central City tramway. However, he does not see the value on spending time on a trail plan heading out to the Chase Gulch Reservoir as it takes people out of town. Hidahl also commented that ‘retainage’ is a valuable tool and would like to see it in the City’s contracts. Council briefly discussed safety issues of having a lack of trails or sidewalks inside the City connecting to Black Hawk for pedestrians using the streets for travel.

Alderman Aiken moved to approve Resolution 20-09 and was seconded by Alderwoman Laratta. The motion passed unanimously.

Manager Miera introduced Resolution 20-10 which would memorialize the updated funding goals related to the restoration, maintenance, and continued operation of the Belvidere Theatre. The City would pledge $250,000 per year toward the project under this Resolution provided revenue shifts or other unforeseen issues do not take precedence. Both Alderman Aiken and Mayor Fey spoke in favor of continuing work on the Theatre. Alderwoman Laratta stated, “I can’t wait to get started and get the face of it painted!”

Alderman Aiken moved to approve Resolution 20-08 and was seconded by Alderman Hidahl. The motion passed unanimously

Director Rears introduced the first reading of Ordinance 20-01 which would amend the Municipal Code concerning the assessment of fines and penalties for unauthorized removal of Stop Work Orders or continued work after being served with a Stop Work Order. Rears referred to prior instances when the physical posting of the Stop Work Order mysteriously disappears, and construction work continues. The current code allows the City to issue a Stop Work Order when a property is in violation of building codes, but there were no fines attached if that Order was ignored, mutilated, or removed. This Ordinance would set a maximum penalty of $2,650 per day of violation in the case of a court trial, or stepped fines (beginning with a warning) of $150, $500, and $999 per day issued administratively by the City for successive violations.

Alderman Aiken moved to approve the first reading of Ordinance 20-01 and set the second reading and public forum for Tuesday, February 18, 2020, and was seconded by Alderwoman Laratta. The motion passed unanimously.

Manager Miera reported that they met with Black Hawk to inform the city there is a proposed annexation from a 1999 Growth IGA that includes area along Lake Gulch Road which connects to Miners Mesa Road in Black Hawk.

Mayor Fey echoed Aiken’s sentiments regarding the fire department. He then thanked Staff for their work on recent work sessions.

Mayor Fey adjourned the regular meeting at 8:26 pm. The next regular Council Meeting will be Tuesday, February 18, 2020.

END_OF_DOCUMENT_TOKEN_TO_BE_REPLACED

Benefitting the county, schools, and much more By Don Ireland   This year marks the 30th anniversary of casinos opening in the former little mining towns of Black Hawk, Central City and Cripple Creek, Colorado. In those early years, smoking was allowed inside ... END_OF_DOCUMENT_TOKEN_TO_BE_REPLACED

Where the dead get to tell their story By Jaclyn Schrock On Saturday, August 21, the Gilpin Historical Society held their annual Cemetery Crawl. Tickets allowed the shuttle of hundreds of guests from the Teller House parking lot to the Cemetery. Depending on v... END_OF_DOCUMENT_TOKEN_TO_BE_REPLACED