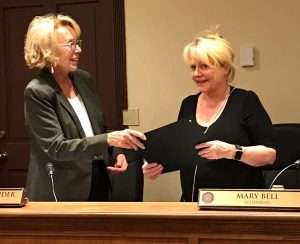 The Central City Council met with Staff for a work session regarding street closures during special events. The City Code is broad in its definition of acceptable conditions to close a city street with a special event permit and staff is looking for better definition of the Code to base their decisions on granting the permit with a street closure requested.Some businesses have reported adverse effects due to a closure, although seldom for events that draw big crowds. Tonight’s work session is the first step in a process involving several entities over the winter months to come to a consensus for policy.

The Mayor called for a motion to approve the consent agenda which consisted of the minutes from the September 4 meeting and regular bill lists through September 11. Alderwoman Laratta moved to approve the Consent Agenda and was seconded by Alderwoman Bell. The motion passed unanimously.

Leasing the Belvidere for Development

Attorney McAskin reviewed the second reading of Ordinance 18-10 which would approve a long-term lease between the City of Central and the Central City Building Authority concerning the Belvidere Theatre. The purpose is to approve a long-term lease with the Building Authority which would allow the Building Authority to access grants and tax credits to support rehabilitation of the theatre. Attorney McAskin added that he believes creating a new entity with a 501c3 would be in the best interest of future funding for the rehabilitation of the building. McAskin requested that the Council approve his law firm to engage another legal entity to pursue that possibility.

Mayor Heider opened the public forum for Ordinance 18-10, and one person chose to address the council.

Resident Jack Hidahl commanded the podium to clarify if this agreement is a revocable long-term lease since it can be assigned to another entity. Attorney McAskin responded that the Building Authority has no power for reassignment, but the council would have to approve an assignment.

Alderman Aiken moved to approve Ordinance 18-10 and was seconded by Alderwoman Laratta. The Ordinance passed unanimously.

Alderman Aiken moved to approve Michow Cox & McAskin, LLP to engage another legal entity for the purpose of pursuing a 501c3 for a yet-to-be created entity and was seconded by Alderwoman Laratta. The motion passed unanimously.

Attorney McAskin introduced the second reading of Ordinance 18-11 which would approve a license fee rebate agreement with 321 Gregory Street LLC and Gregory Gaming LLC (Johnny Z’s and Grand Z casinos). The rebate would help offset the cost of constructing a surface-level parking lot in Gregory Gulch known as the AGE Lot. The City will offer a rebate on gaming device fees to the stated entities for all new devices with a total rebate not to exceed 88% of the total cost of the project.

Mayor Heider opened the public forum for Ordinance 18-11, and one person chose to address the council.

Resident Jack Hidahl took charge of the podium to fire off a series of clarifying questions. First, he asked if the rebate only applied to new devices and did not apply to current devices; Manager Miera responded, “yes.” Then he asked if the stated public purpose of this agreement was to increase the number of devices in the City? Miera again answered in the positive. Hidahl asked, “Over what period of time” and how many devices? The City Manager answered that the number of devices is capped at 500, and the rebate is not to last more than ten years or more than 88% of the cost of construction ($880 thousand total), whichever comes first. The device fees acceptable for rebate would be $850 per new device per year. Hidahl next inquired what the benchmark is for determining new devices. Manager Miera responded that a threshold is established by the device count of July 1, 2017. Hidahl next asked if the actual cost of construction is more than expected if it would increase the cap for the rebate. Miera responded that $880 thousand is 88% of the total cost, but if the cost comes in under that amount, they City would only pay up to that amount. Hidahl asked who determines what the costs are? City Attorney Marcus McAskin stepped in to answer that the City is really in control. All associated cost papers are given to the City for their own analysis and verification. Rebates are not applied until that step is taken.

Mayor Heider commented that thanks to this Ordinance, she “finally” found out what AGE stands for – it’s American Gambling Enterprises. Manager Miera stated that it has also been called American Gaming and Entertainment, but ultimately, it is a localized name that has come to refer to that piece of property.

Also discussed is whether new devices under any other entity would qualify for the rebate, but only the devices added by 321 Gregory Street LLC and Gregory Gaming LLC would qualify. Additional discussed was whether new devices would back-date to the July 1, 2017 date; according to the language of the Ordinance, it would begin the count at that date.

Alderman Aiken moved to approve Ordinance 18-11 and was seconded by Alderwoman Laratta. The motion passed unanimously.

A Promise is a Promise

City Council entertained granting a scholarship for the Promise Program to Daniel Madrigal-Garcia. Daniel is entering his third year of college attending Colorado State University and shifting his field of study from Communications to Anthropology, although he will continue to study communications as a minor. Daniel was present and addressed the Council. Mayor Heider commented that “The material you submitted was really impressive.” Manager Miera informed the Council that this application represents the fourth in 2018 for the promise program and the budget for 2018 is $15,000 (three awards). He continued that an unexpected student that had not recently graduated had made her request which was granted; even so, staff has gone through the budget and recommends awarding Madrigal-Garcia a scholarship based on available funding and they do not anticipate a supplemental appropriation.

Alderwoman Laratta moved to approve the award and was seconded by Alderwoman Bell. The motion passed unanimously and the people in the room applauded for Mr. Madrigal-Garcia.

Manager Miera reviewed the quote for Property and Casualty Insurance for 2019. Property insurance claims increased by $4,098 over 2018 and Worker’s Compensation claims decreased by $4,276; for a net decrease of $178. Hail damage attributed to the increase in property claims.

Alderman Aiken moved to approve the quote and was seconded by Alderwoman Laratta.

Public Works Director Hoover introduced Resolution 18-25 which would approve a second change order for the Central City Spring Street Rehabilitation Project and authorize the city manager to execute the change order. This additional amount allows the contractor to bury two additional conduits, for communications, along with the Xcel utilities. The paving will be pushed back to the next fiscal year.

Alderman Aiken moved to approve Resolution 18-25 and was seconded by Alderwoman Laratta. The Resolution passed unanimously.

Director Hoover took a minute to thank the Council for their continued support for this project; they have seen continual challenges, but with their support, they will see the project completed.

Director Rears introduced Resolution 18-26 which would authorize the execution of easement for undergrounding Spring Street utilities in the Big-T parking lot. The easement is about 600 square feet on the west side of the lot.

Alderwoman Laratta moved to approve Resolution 18-26 and was seconded by Alderwoman Bell. The motion passed unanimously.

The Roof Is Leaking

Director Rears next introduced Resolution 18-27 which would authorize an emergency purchase for repairs to the Belvidere Theatre roof and authorize the city manager to execute a contract for the repair. There is continual water damage to the building due to multiple leaks in the roof. The cost of the repair would not exceed $35,750.

Alderwoman Laratta commented, “I only wish it could be painted at the same time.”

Alderman Aiken moved to approve Resolution 18-27 and was seconded by Alderwoman Laratta. The motion passed unanimously.

Miera reiterated that the paving of Spring Street will be delayed until next year’s construction season.

Mayor Heider presented Alderwoman Mary Bell with a certificate of appreciation for her work and dedication to the City and the Council. Alderwoman Laratta exclaimed, “She has added class, beauty, hope, culture, flowers, and benches to our city and I’m going to miss her.”

Main Street Central City representative Barbara Thielemann first spoke informing Council that the Main Street Central City Pumpkin Patch is coming on October 20th and 21st. Main Street introduced the event in 2017 and has been asked to bring it back in 2018. It will be in the Big-T lot from 11 a.m. to 4 p.m. on that Saturday and Sunday and will feature a bouncy castle, food venders, hot cider, hot chocolate, hot coffee, scarecrows and pumpkin people, and wagon rides for the little people.

Jack Hidahl made his final approach to the podium to talk about sidewalks. He stated that when the new sidewalk was installed in front of Opera House, Teller House, and Assay Office, the contractor did not match the old grade and the sidewalk had to be ground down for safety. Now the masonry is starting to sag and drop off. “Are we going wait for it to fall off or are we expecting the Opera to do that work or the original contractor?” Manager Miera responded that his concern has been noted.

Mayor Heider adjourned the regular meeting at 8:07 p.m. The next regular Council Meeting will be Tuesday, October 2, 2018.