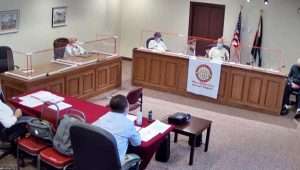 Council met with staff for a Work Session prior to the regular meeting to discuss options for remote-learning students pertaining to their socialization; and to review language for Initiative 257.

Program for all Gilpin students vs only Central City students

Manager Miera met with Jacob Rippy to discuss a program being funded by grant money from behavioral health. Rippy is developing a program for school-age children and needs additional funding.

Alderwoman Jackie Johnson spoke passionately about the need to provide resources to families of school children who are trying to balance school learning and learning new technology while holding down jobs. The Mayor stated he knows families that are not able to go back to work, or to go back to work full-time because of the time they need with their children. Manager Miera commented that right now the City has an opportunity to help facilitate a program through the County.

Alderwoman Judy Laratta responded that the County already has a foundation and it would be better than building our own from the ground level. Mayor Fey argued that the County is trying the help the needs of all their students, but we can help those in our City. He encouraged Council support continuing an investigation into how much a demand or need there is for additional programming.

Mary Laffey, resident of Central City, commented in the Chat Box that “Any adult who would be able to provide supervision of school aged children may have to be certified in a first aid program, and have background checks.” And added, to “Check with the Gilpin County Health department before you go further, please.”

Initiative 257 is a 2020 ballot initiative that will read, “Shall there be an amendment to the Colorado constitution and a change to the Colorado Revised Statutes concerning voter-approved changes to limited gaming, and, in connection therewith, allowing the voters of Central City, Black Hawk, and Cripple Creek, for their individual cities, to approve other games in addition to those currently allowed and increase a maximum single bet to any amount; and allowing gaming tax revenue to be used for support services to improve student retention and credential completion by students enrolled in community colleges?”

Attorney Marcus McAskin read some language from the entire ballot language saying the gaming industry is facing an economic crisis due to the pandemic.

Mayor Fey cautioned that if Central City does not approve the changes for the City (if the Initiative passes) they would be economically handicapping the City’s casinos.

Mayor Fey led the Pledge of Allegiance and then asked for any amendments or additions to the evening’s agenda. An item was added to continue discussion from the Work Session on Initiative 257.

The Mayor called for a motion to approve the consent agenda which consisted of the minutes from the August 4 meeting and regular bill lists through August 12.

Alderman Aiken moved to approve the consent agenda as amended and was seconded by Alderwoman Laratta. The motion passed unanimously.

Mayor Fey opened the floor to the public for anyone who wished to speak to a topic on the agenda and no one chose to speak.

Director Abigail Robbins presented the final report for the 2019 Audit of the City’s financials. The auditors, Hinkle and Company PC, issued their official opinion that the financial statements were presented fairly in all material respects and were in accordance with generally accepted accounting principles. The audit was conducted remotely and electronically during the pandemic. Everything they asked for was received. There were no corrected or uncorrected mistakes in the financials. This was the third year financials were audited by Hinkle and Company, PC.

Alderman Hidahl pointed out that the City ended up with $464,000 less in 2019 than they anticipated. This was due to $716,000 less revenues than projected combined with the City spending $251,000 less than projected.

Alderwoman Laratta moved to accept the 2019 Audited Financial Statements and was seconded by Alderman Aiken. The motion passed unanimously.

Director Ray Rears introduced the first reading of Ordinance 20-11 which would amend the Land Development Code regarding fees in-lieu of available parking that would be collected for future parking development. New businesses would need to provide parking space per the Land Development Code, but if they are not, they would pay the in-lieu fee. Those fees would be used to develop new parking “at some point,” said Director Rears. The fee schedule is graduated so that the first couple years a business would pay 10% of the value of required spaces relative to their business size if they required between 76 to 150 spaces. In 2017, the cost per space is $30,000. The City currently has 1,439 spaces available with a surplus of 372 spaces. Surplus is based on peak demand during the summer months in 2019. The argument for this in-lieu program is that new businesses bring in additional demand for parking which does not exist. For businesses that move into existing commercial buildings, then they would be evaluated for this fee based on whether their business would require more spaces than the previous business.

Alderwoman Laratta commented that this is a good idea having the graduated fee schedule. Laratta moved to approve the first reading of Ordinance 20-11 and set the second reading and public hearing for September 1, 2020 and was seconded by Alderwoman Johnson. The motion passed unanimously.

Manager Miera introduced Resolution 20-28 which would extend the declaration of emergency for the City through Wednesday, September 2, 2020.

Alderwoman Laratta moved to approve Resolution 20-28 and was seconded by Alderman Aiken. The motion passed unanimously.

Manager Miera read an email from emergency personnel that responded to a head-on collision on the Central City Parkway earlier this month reporting how efficient the Central City Fire Department performed and that they could match any highly trained urban department. They extricated two individuals from two vehicles simultaneously so that they could be transported via Flight for Life helicopters to area hospitals.

Alderman Hidahl asked if the new cell tower would utilize 5G technology. He stated that 5G wavelengths have serious concerns about health and safety citing a change of policy in Chicago.

Mayor Fey adjourned the regular meeting at 8:55 pm. The next regular Council Meeting will be Tuesday, September 1, 2020.

END_OF_DOCUMENT_TOKEN_TO_BE_REPLACED

Where the dead get to tell their story By Jaclyn Schrock On Saturday, August 21, the Gilpin Historical Society held their annual Cemetery Crawl. Tickets allowed the shuttle of hundreds of guests from the Teller House parking lot to the Cemetery. Depending on v... END_OF_DOCUMENT_TOKEN_TO_BE_REPLACED