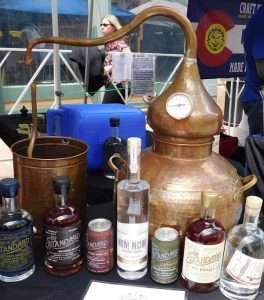 “Best Event in the Entire State”

On Saturday, June 30, 2018, Central City hosted the popular Stills in the Hills event. Local distillers lined Main Street pouring hundreds of dollars of their product into tiny tasting glasses for patrons while live music pulsated down the lane entertaining casino guests, visitors, and ticket holders alike. Stills is in its sixth year and other bourbon events are popping up across the state creating competition between promoters to attract the best distillers to their location.In fact, two distillers scheduled for the 2018 event backed out due to scheduling conflicts which could indicate Central City’s star event may be fading for the promise of glitzier locales. However, Mike Palasciano of Vapor Distillery (formerly Round House), stated that Central City’s Stills in the Hills is “one of the best events in the entire state.” Mike says it is always a pleasure to come up to Central City and that other distillers in the Boulder area were talking about this event the week prior. So how does Central’s distilling festival measure up to the competition?

Twenty-five distillers lined the street this year pouring samples of bourbon, whiskey, vodka, gin, rum, and tequila, along with various flavor infused spirits, mixers, and pre-made cocktails. Age appropriate ticket holders were given wrist-bands to easily identify participant tasters from the curious event crashers and small 3-ounce mug-shaped glasses emblazoned with the event name. Vendors pour less than an ounce of spirit for the tasting and there are plenty of buckets to dump the excess and water to rinse the glasses and to rehydrate. On the south end of the street stood a tent and tables where VIP guests could fill-up on food catered by Jared Kennedy and JKQ and get special made cocktails from a bartender using products by the distillers on the street. A new feature for the VIP tent was a small sound stage where one and two-person bands sung the blues. Mid-way where Gregory Street meets Main Street, non-alcoholic vendors hocked their wares amidst Model-A Ford cars. The Model-A Ford Club brings their classic vehicles each year to the event, parking their precious historic assets on the street for all to appreciate. Up on the north end, a large sound stage blocked the entry-way holding court for three professional bands: Ethyl and the Regulars; Marcia Ball; and The Rick Lewis Project.

The Distillers and Central City

Each spirit vendor was represented by one to three people from their business and often by the owners and head distillers themselves. Five of the original thirteen distillers from year-one (2013) are still coming up and had some things to say about the event.

Dave Pucul of Spirit Hound Distillers (located in Lyons) reported that he knows a lot of people that come up to Stills in the Hills and he keeps coming up because it is a fun area to be in and Stills is “a great event.”

Brad Schroeder, co-owner of Mystic Mountain (located in Larkspur) said he loves the competition with the other distillers. He also reports that so many of these distilling festivals are “drunk fests,” but in Central City, the attendees are genuinely interested in their products, the ingredients used, and the process of how they are made. The event itself is well organized and “one of our favorites all year,” exclaimed Schroeder.

Adam Taylor of Mile High Spirits (located in downtown Denver) loves coming up to Stills because “It’s not as big; more intimate. The customers are more engaged and I love hanging out afterwards.”

Kayla Veatch, bar manager for Golden Moon Distillery (located in Golden), said she came here because “I was told to do this event.” Golden Moon has been represented in the past by owner Stephen Gould, but he could not make it this year and sent Kayla instead.

Cody Stevens, grandchild of the owners of Black Canyon Distillery (located in Mead) said “My grandmother said I would have the most fun at this event; it’s been great every year.” Stevens is in business school and is planning on taking over the business from his grandparents soon. A few years ago, he started helping his grandparents by sweeping the floors and gained an interest in the process. Cody began reading everything he could find about distilling.

Three newcomers made the trip this year and they had some interesting things to say.

Laura Mellberg from Spruce Creek Spirits (located in Golden) said she knew a lot of people coming up to Stills in the Hills, and found the event on the internet.

Michael Girard of 3 Hundred Days Distillery (located in Monument and named for 300 days of sunshine) reported he entered the festival due to word of mouth from other distillers, hearing it is “One of the better events in Colorado.”

Michael Chapyak, president of Archetype Distillery (located in an old theater building at 119 S. Broadway in Denver), reports that Stills in the Hills is the most successful event and “most well attended.” It is a cool spot to be on Main Street and to be located outdoors is a plus. If the address is familiar, the theater had a reputation of ill repute at one time, but Chapyak has remodeled the interior to reflect the New York City night club scene; artistic and fashionable.

This year was a great event with some fantastic music. There were many folks who never bought a ticket to the tasting, but still had a great time. Despite threatening thunderheads, only a few drops of rain splashed the heads of people, although the temperature dropped with a cool breeze. The bands at both ends of the street was a good idea, but it made speaking difficult due to the competing volume. It may have worked better had the bands alternated performances between the ends of the street. Mike Muller from Elwood Distilling mentioned the only thing missing from Central was a tasting contest. He believes getting volunteer judges would be easy and the only cost would be prizes. Muller may be right, but that will be up to Kara Tinucci and the Central City Business Improvement District. However, Jay Johnson of Bear Creek Distillery (located in Englewood) says “Kara’s always been good to me,” and Jeremy Kempter of Old Town Distilling agrees saying “Kara does a good job, she makes us feel special. The event is well organized and we love the setup,” so you never know, tasting might be on the table for the future. Even with the loud music and lack of a tasting competition, there is no doubt that Stills in the Hills remains a great event.

END_OF_DOCUMENT_TOKEN_TO_BE_REPLACED

Benefitting the county, schools, and much more By Don Ireland   This year marks the 30th anniversary of casinos opening in the former little mining towns of Black Hawk, Central City and Cripple Creek, Colorado. In those early years, smoking was allowed inside ... END_OF_DOCUMENT_TOKEN_TO_BE_REPLACED