Celebrating the history of Black Hawk 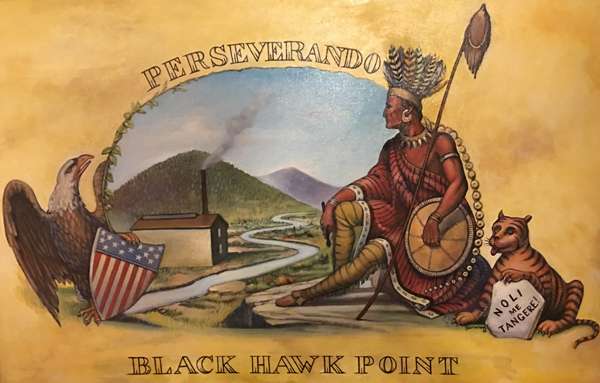 State of Colorado, County of Gilpin, City of Black Hawk

Whereas, in 1862, John J. Pratt and Bela S. Buell produced a lithographed map entitled Map of the Gold Regions in the Vicinity of Central City, Gilpin County, Colorado Territory and upon said map egregiously and affrontingly identified the nascent community of Black Hawk Point as Enterprise; and,

Whereas, John E. Dillingham was the accomplished young artist who sketched the Colorado Territorial scenes which adorn the border of the Pratt and Buell map. Dillingham, during this same time period, also created a crayon sketch of Black Hawk Point; and,

Whereas, William L. Lee, Dr. Fredrick H. Judd, and Milo Lee were the owners of the largest, best equipped, and most impressive quartz stamp mill in the gold regions of the Colorado Territory, known as the Black Hawk Mill, said mill being located in the heart of Black Hawk Point; and,

Whereas, because Lee, Judd, and Lee were determined and committed to ensuring the community surrounding their mill would be known as Black Hawk Point and not Enterprise, they became the subscribers or benefactors for Dillingham to have a lithograph produced of his crayon sketch which would be entitled “View of Black Hawk Point.” Being astute and sagacious businessmen Lee, Judd, and Lee realized the significant marketing value and influence just such a lithograph would have in advancing future investment and community growth within Black Hawk Point; and,

Whereas, Lee, Judd, and Lee instructed Dillingham to fashion a symbolic vignette at the bottom of the Black Hawk Point lithograph which although cryptic, would upon keen observation definitively reveal whom the artist subscribers were. Whereupon, Dillingham very cleverly and wittily designed a vignette which included an American Indian, an eagle, and a tiger, which devices symbolized the three mills owned by Lee, Judd, and Lee; the Black Hawk, the Eagle, and the Tiger, all located within Black Hawk Point. Dillingham inscribed his work “Respectfully dedicated to the subscribers by the artist,” and,

Whereas, Lee, Judd, and Lee aptly instructed Dillingham to surmount the vignette with the word “Perseverando” to establish certitude and make prominent to the general public that Black Hawk Point would persevere, push forward, and be preserved; and,

Whereas, Lee, Judd, and Lee wanted to admonish Pratt and Buell and their supports from hindering and impeding the future of Black Hawk Point, therefore they instructed Dillingham to include within the vignette the Latin phrase “Noli me tangere,” which translates into “do not meddle, or do not interfere, or don’t tread on me;” and,

Whereas, the admonishment from Lee, Judd, and Lee was heeded, for other than the egregious and affronting Pratt and Buell map, all forthcoming maps would signify Black Hawk Point or Black Hawk; and,

Whereas, John E. Dillingham’s lithograph of Black Hawk Point met with rave reviews, becoming a focal marketing piece for Lee, Judd, and Lee as well as other business leaders in Black Hawk Point, bolstering growth, investment, and civic pride in the nascent community; and,

Whereas, ordaining the vignette as the City seal was the second ordinance passed by the inaugural city council thereby acknowledging the gratitude, respect, and admiration the citizens of Black Hawk held for William L. Lee, Dr. Frederick H. Judd, and Milo Lee; and,

Whereas, from time to time since 1862, extraneous forces have sought to hinder and impede or criticize and condemn, what is in the best interest of The City of Black Hawk; and,

Whereas, the indomitable spirit and unwavering pride and commitment that existed in Black Hawk from its establishment as a mining camp is as prevalent today as it was at that time; and,

Now, therefore, be it resolved by the Board of Aldermen of the City of Black Hawk, that:

Section 1. The Mayor and Board of Aldermen find cause and determine for the aforementioned accounting that the Latin phrase “Noli me tangere” be ordained as The City of Black Hawk’s official motto; and,

Section 3. That the City Clerk shall cause this Resolution to be delivered to the Office of the Gilpin County Clerk & Recorder for recordation and also cause to be published in the City’s newspaper of record; and,

Section 4. That the City Clerk shall cause the content of this Resolution to be inscribed on a plaque and said plaque to be affixed in the Black Hawk Council Chambers as a notice that The City of Black Hawk shall not abrogate nor abdicate any authority or ability to self-govern and as a demonstration of civic pride in The City of Black Hawk’s past, present and future.

Further the Mayor and Board of Aldermen sayeth naught.

END_OF_DOCUMENT_TOKEN_TO_BE_REPLACED

Benefitting the county, schools, and much more By Don Ireland   This year marks the 30th anniversary of casinos opening in the former little mining towns of Black Hawk, Central City and Cripple Creek, Colorado. In those early years, smoking was allowed inside ... END_OF_DOCUMENT_TOKEN_TO_BE_REPLACED

Where the dead get to tell their story By Jaclyn Schrock On Saturday, August 21, the Gilpin Historical Society held their annual Cemetery Crawl. Tickets allowed the shuttle of hundreds of guests from the Teller House parking lot to the Cemetery. Depending on v... END_OF_DOCUMENT_TOKEN_TO_BE_REPLACED