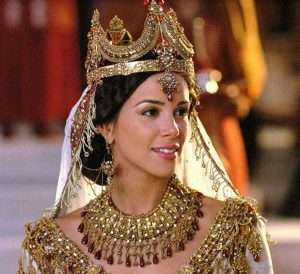 With Purim – Feast of Lots

Esther’s events, settings and story line are extravagantly lavish. It is cherished being such an action-packed, cliff-hanger, with mysteries tangling royal authorities who rule a land nearly the size of America in the 4th century, BC. This story was some 400 years before Jesus, and 700 years before Alexander the Great from Greece destroyed Persia. There are “fear for your life” predicaments, some gruesome empire-wide decrees, and elaborate as well as somewhat decadent royal feasting with unlimited provisions of royal wine. This story has been retold and celebrated for over 2,000 years. We are so enchanted by this story because it makes it clear to each who listens, “for what great purpose God may have brought them to their own position in life.”

Purim – Feast of Lots, is one of the most fun, joyous, and festive Jewish Celebrations. It captures those present with participation similar to Halloween or Maude Gras. The celebration commemorates the salvation of Persian Jews from a bloody mass destruction by an evil noble on a specific day, chosen by casting lots; hence the name Purim, Feast of Lots.

Purim customs perpetuate the sending of greetings and food parcels, giving to charity, masquerading and carnivals, along with a large festive meal, wearing costumes with characteristic face paint and special hats. Hat shaped cookies with a mystery surprise ingredient entices participants to sloth through the clues to solve mysteries. Most important in the celebration is the retelling the complete story of Esther in the synagogue and songs. With familiar anticipation, those listening to the reading respond with boisterous boos and hissing at the mention of the evil character, Haman. The reading of the story is not dull or boring – it includes chanting by the listeners with emotional blessings and curses of the characters.

Before 1880’s, Gilpin County had not likely seen the impact of this celebration, when it was believed 422 Jews were in Colorado. Jews and their celebrations spread with the pioneers as miners needed supplies and Jewish merchants enjoyed the freedom and acceptance in a less discriminating social order found in the west. The Diaspora of Eastern European Jews to America 1880-1927 significantly increased the Jewish population. Denver, Boulder, and Colorado Springs grew as the stopping off point for miners and settlers moving into the mountain regions, so these cities have the largest Jewish population and number of synagogues in the state. Colorado’s Summit and Eagle Counties of the mountain regions may have had a more concentrated population of Jews than Gilpin County, by 1980 there was a place for them to gather and worship.

So Purim does exist in our area, but few hear of this celebration since it is not one of the six Jewish festivals Moses included in the Jewish laws. Being more of a national Israeli holiday than a Jewish holiday, it does not restrict business, so we don’t notice this celebration as it’s not interrupting our daily routines.

Who, When and Where

The book of Esther is found in the Old Testament of the Bible, before the books of Job, Psalms and Proverbs.

The main characters of the book of Esther include: King Xerxes, his noblemen, Mordechai, Haman, and Esther.

King Xerxes, was the fourth of 13 rulers of the Persian Achaemenid Empire (included Babylon, Media, Egypt, India-Western Asia), originating with Iranians. His father Darius the Great (550-486 BC) died after invading Greece in 492 BCE, leaving his son to finish the punishing of Athens for having supported Ionian colonies when they attempted to revolt against Persian rule. King Xerxes is said to actually mean ‘king of kings,” and he did not have to demonstrate his qualifications as king having been recognized as worthy by royal ancestry. He later proved his worth effectively managing the land between India and Ethiopia, at the shortest distance was 2,684 miles with a military force of two million as some count.

The citadel or palace was called Susa, which is located near the bank of the Karkheh River in the Khuzestan region of Iran at the foot of the Zagros Mountains.

The Biblical book of Esther is considered to have begun around 482 BC and concluded in March 473 BC.

Mordechai is considered as the author of the book of Easter; a third generation decedent from the tribe of Benjamin who had been taken captive from Judea by King Nebuchadnezzar and kept in Babylon. Because of the detailed description of the palace, and being very familiar with the events there as well as the culture, it is suggested he worked within the palace before warning Xerxes of an assassination attempt which Mordechai is credited with having thwarted. He then was given an honored position in the empire, infuriating Haman, another palace noble.

Esther is a young orphaned girl, adopted by her first cousin, Uncle Mordechai. He is the one who suggests she go to the palace where she was received and provided a two year beauty treatment and training to please King Xerxes. He spent each night testing each virgin before selecting Esther as his new Queen, having kept hidden her Jewish heritage. Coincidence? Not likely, as God’s Word tells this story, showing how He prepares those who follow Him for their purpose by His control of situations.

Haman is one of King Xerxes prideful nobles who becomes enraged because Mordechai will not bow down to him when Haman passes the palace gate. Recognizing that Mordechai is Jewish, choosing to honor His God and not Haman’s position, the retaliation plot begins. As this animosity festers, Haman is able to get King Xerxes to decree the annulation of all the Jews in the provinces on a particular date. Haman builds an excessively tall gallows to hang Mordechai from. So who did become hanged from it?

The exiting journey through the tales of Esther can best be enjoyed by reading the story yourself.

To honor the Persian Achaemenid Empire’s military officers of Persia and Media as well as nobles and princes of the 127 provinces, King Xerxes arranged a celebration lasting six months. This feast, likely done to unify personnel, was a grand event displaying the empire’s excessive wealth with much pomp and splendor, characteristic of his majesty, Xerxes the Great.

After the six month party ended, King Xerxes gave a week-long celebration in an enclosed garden of the king’s palace for those local men who had hosted the sixth month event, regardless of their position in his kingdom, serving at the citadel of Susa. The book of Esther gives details of the king’s garden having marble pillars hung with white and blue linen, secured with cords that were purple and white through silver rings. There were couches of gold and silver on a mosaic floor. Depending on the translation, the floor was made from marble, mother-of-pearl, alabaster, porphyry – a purplish-red exquisite stone, malachite, and onyx among other costly stones.

The king commanded the use of gold goblets – each unique – to be refilled with as much wine as each man wanted. His wife, Queen Vashti also hosted a banquet for the women in the palace.

On the seventh day of this celebration, when King Xerxes was high in spirits, some suggest his noble guests encouraged him to request the presence of Queen Vashti dressed in only her crown, as she was very beautiful. Some suggest this is something she might have been happy to do, but when the seven eunuchs told her the king requested her presence in only her crown, she refused. It was speculated that she might have had a skin condition that would have distracted from her beauty. In any case, King Xerxes was very angry at being refused, so asked the top seven nobles who served him in the vast kingdom how to handle his wife. Agreeing with Memukan’s suggestion, they decided that if other wives heard of this, they would also refuse their husbands. So, it was decided to refuse to allow Queen Vashti to ever see he husband again. The king’s edict was proclaimed and sent to every part of the kingdom, decreed in each language of the people. The message was that every woman will respect her husbands, from the least to the greatest.

When King Xerxes had calmed down, he remembered what had happened to his queen. So, the king’s personal attendant suggested he call to every province to request the most beautiful virgins be brought to the palace so the king could select a new queen to replace the deposed Vashti. The young girls would be prepared with beauty treatments and training for the king pleasure by Hegai, the king’s eunuch who was in charge of the women.

Esther’s story, having kept hidden her Jewish heritage, shows extreme bravery, empowered by asking her maids to fast and pray with her for three days.

Read the rest of the story of how things turned out for Haman and Mordechai, and how this Jewish girl Esther protected her people in the Book of Esther.

END_OF_DOCUMENT_TOKEN_TO_BE_REPLACED

Benefitting the county, schools, and much more By Don Ireland   This year marks the 30th anniversary of casinos opening in the former little mining towns of Black Hawk, Central City and Cripple Creek, Colorado. In those early years, smoking was allowed inside ... END_OF_DOCUMENT_TOKEN_TO_BE_REPLACED

Where the dead get to tell their story By Jaclyn Schrock On Saturday, August 21, the Gilpin Historical Society held their annual Cemetery Crawl. Tickets allowed the shuttle of hundreds of guests from the Teller House parking lot to the Cemetery. Depending on v... END_OF_DOCUMENT_TOKEN_TO_BE_REPLACED