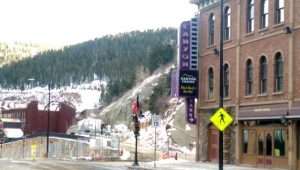 Black Hawk City Council met at 3 pm on Wednesday, January 24, 2018 in their chambers upstairs at 211 Church Street, Black Hawk, CO. The traditional bell rang to signal that the City Council session had begun. The honored bell ringer was Ethan Watel of Baseline in Denver who contracts with the City of Black Hawk to facilitate appropriate designs for construction projects.

Mayor David Spellman called the meeting to order, and request roll call which confirmed the presence of Alderman Linda Armbright, Alderman Paul Bennett, Alderman Jim Johnson, Alderman Hal Midcap, Alderman Greg Moates, and Alderman Benito Torres. These City Council members are experienced at their positions, with an accumulated total of over 73 years as elected positions with the city. Also seated at the Council table were City Manager Jack Lewis, City Attorney Corey Hoffman, and Deputy City Clerk Michelle Martin. Immediately following roll call, honor was given to our United States Flag by all standing and saying the pledge of allegiance.

There were no conflicts of interest found, no public comments and the minutes from the January 10, 2018 session were approved.

Resolution 2-2018, A Resolution Conditionally Approving the Certificate of Appropriateness and the Site Development Plan for the Canyon Parking Garage and Lot was presented to the City Council by Planning Consultant, Ethan Watel representing Baseline along with the City of Black Hawk’s Community Planning and Development Administrator Cynthia Linker.

On December 13, 2017 Dakota/Canyon Casino proposed to the Council to construct a three level parking garage and a surface parking lot. The parking garage is planned to accommodate 302 parking spaces. The surface lot is planned to accommodate 97 parking spaces. The parking garage is planned to contain 137,954 square feet. The lowest level of the parking garage will be accessed from the east through the newly approved Dakota parking lot access drive. This level will be at an underground basement level on the west side of the garage, with no west side exterior exit. Exiting to the west will require accessing the second level internally. The second level will have an at-grade external access on the west side. The third level parking will be uncovered, with partial screening from a brick veneer faced concrete wall.

Access to the garage from the east passes through the Dakota property connecting to the recently approved Dakota parking lot, eventually exiting out to Main Street. The planned route that this access takes is through what was previously designed and approved as required landscaping for the Dakota parking lot project. In order to compensate for this loss of approved Dakota landscaping, the applicant has proposed to construct a pocket park between the Dakota parking lot and the Canyon parking garage. In addition to the parking facilities, the applicant also proposes to provide landscaping, public street and infrastructure improvements. The original December 13 proposal was not awarded a Certificate of Appropriateness, so revisions were prepared for the January 10, 2018 City Council meeting. A few more last minute improvements to the plan occurred just before the January 10th Council meeting, so a continuance was granted to reconsider the Certificate of Appropriateness later in January.

Prior to the January 24, 2018 meeting the City of Black Hawk received a revised application from Dakota/ Canyon, LLC/ Jacobs Entertainment, LLC (applicant) concerning its property located at 131 Main Street related to a proposed parking garage, recognized as Dakota/Canyon Parking Garage. The most significant revisions provided by the applicant were provided by Bob Schnautz, Principal with River Studio Architects in Denver who explained the Site Development Plan (SDP) with updates that included:

There continues to be more revisions needed regarding some of the channeling of North Clear Creek, to be in compliance with 100 year and 500 year flood conditions. Conditional approval allows for plans to qualify the water channel with alternative plans.

Resolution 3-2018, A Resolution Approving Variances from the Front Set Back and Landscaping Requirements. With the removal of the earth mound from the plans that separated the Dakota surface parking lot from the Canyon Parking Garage, a pocket park was proposed to complete landscaping requirements. The GOLD Zoning District requirement for the front yard setback is 10 feet. The proposed garage building is not in compliance with this requirement. The applicant proposes to set the building back a minimum of 3.75 feet at its closest and a maximum of 9.5 feet from the front (Main Street) property line. (The setback varies because the front property line is not a straight line and the garage building has been placed at a slight angle.)

Staff recommendations regarding the variance found all 10 criteria were met to approve a variance.  Significantly the variance would pose a real hardship to the construction plans, not because of any intended uses or human errors, rather, primarily because of unique property characteristics (the street boarder is not a straight line and the building has a straight line), so recommended to approve the variance to the GOLD Zoning District requirements.

The next three resolutions were also grouped in the presentation and discussion by the Council. The background information and evaluation of specific proposals have been evaluated and recommendations to the Council have been made by Baseline, of Denver.  On October 10, 2017, the City of Black Hawk received an application request for a Certificate of Appropriateness (CofA) that had been completed by Joseph DeRosa from Affinity Gaming. The request involves the replacement and addition of exterior lighting at the Golden Gates Casino (261 Main Street), the Mardi Gras Casino (300 Main Street) and the KMM Parking Garage (255 Main Street) all located in Black Hawk. Because these three (3) projects are occurring on three (3) different properties, three (3) separate lighting plans/applications and reviews are required. Presenter were

Resolution 6-2018, A Resolution Conditionally Approving a Certificate of Appropriateness for the Exterior Lighting of the Golden Gates Casino Located at 261 Main Street

Resolution 7-2018, A Resolution Conditionally Approving a Certificate of Appropriateness for the Exterior Lighting of the Mardi Gras Casino Located at 300 Main Street

Resolution 8-2018, A Resolution Conditionally Approving a Certificate of Appropriateness for the Exterior Lighting of the KMM Parking Garage Located at 255 Main Street

There was little discussion when Ethan Watel and Cynthia Linker presented to the Council who already understood the request from the packet (available at the City Council Web site) provided with maps, diagrams of the new lighting fixtures and placements. When the motion for all three Resolutions 6, 7, and 8-2018 was approved, Mayor Spellman said “Light it up!” with the room chuckling as transitions were made toward Action Items.

Finance Director Lance Hillis gave cordial greetings to the Council before proceeding to summarize the next two resolutions. Hillis coordinated these initial lease agreements with Cactus Arts and Twin Perspective for cultural enrichment opportunities with classes and art studios.

Resolution 9-2018, A Resolution Approving the Agreement of Lease Between the City of Black Hawk as Lessor and Cactus Arts as Lessee for Property Located at 440 Gregory Street, Black Hawk, Colorado. Julie Lawrence of Black Hawk is the Financial Director of Cactus Arts who has sought this lease from Mountain City.

Black Hawk staff recommended the Council to approve Resolution 9 and 10 -2018. The Council unanimously passed Resolutions 9 and 10.

Resolution 11-2018, A Resolution Approving a Lease Agreement and Necessary Development Documents with CommNet Cellular dba Verizon Wireless for the Installation and Maintenance of a Small Site Cellular Tower on the Hidden Valley Water Plant Property. Public Works Director Thomas Isbester originated this lease agreement for the City of Black Hawk. As of print deadline, it has not been disclosed when, where, or who would have Verizon services strengthened by this tower.

City of Black Hawk staff has been working with Verizon since April 2015 to allow them to install and maintain a small site cellular tower on the Hidden Valley Water Plant property. The lease space will include a 13’ x 6’ space for the tower and component rack as well as the necessary easements to provide their own power and communications connections. The tower will be approximately 35 feet tall and one (1) foot in diameter, painted to match the existing light poles in the parking lot. The lease space is currently covered with native vegetation. The contract is for an initial term of 5 years at $6,000/yr. There is a provision for an additional four (4) five (5) year terms with appropriate termination provisions. Each five year extension would include a 10% increase in the annual rental rate. Development has been approved through Clear Creek County.

The cellular tower will be on top of the new water treatment plant downstream from Black Hawk which provides water for all properties in Black Hawk. This council recently required all properties to use the water that has been treated for everyone’s health rather than any well waters surely contaminated by previous mining ventures. Any questions about the water treatment could be answered on the City of Black Hawk web site or Water Superintendent Jason Fredricks for the Hidden Valley Water Treatment Plant. HVWTP treats surface water from Clear Creek and is a conventional water treatment plant, meaning it uses coagulation, flocculation, sedimentation, and filtration, before chlorine disinfection. The Hidden Valley Plant can remove iron and manganese from the raw water with special pressure filters that have a proprietary media designed for iron and manganese removal Hidden Valley adds lime, soda ash, and carbon dioxide to aid in the filtration process and for corrosion control. The Water Department maintains several pump stations for pumping raw and treated water. The department monitors the quality of the water, before treatment, during and after the treatment process, and throughout the distribution system. The department regulates flow and pressures in several pressure reducing stations.

Resolution 12-2018, A Resolution Approving the First Addendum to Professional Services Agreement for Holiday Decorations with Alpine Artisan Studios in the Amount Not To Exceed $155,010.

This agreement will provide funding for the removal, inventory, condition report and storage of the Christmas décor that is currently on display. This portion of the work is $25,297. Staff will begin to prepare program options for the 2018/ 2019 install based on feedback from City Council. About half of the garlands have will need to be replaced due to exposure which accounts for a majority of the increase in budget for the year.

Public Works Director Thomas Isbester presented a request to the Council for this “most anticipated tradition to put bows on the streets” of Black Hawk. Isbester participated in the discussion and answered their questions.

Resolution 13-2018, A Resolution Approving the 2018 Fireworks Production Contract Between the City of Black Hawk and Western Enterprises, Inc.

Boom Town Fireworks Production Contract (the name given by Western Enterprises, Inc. for the Black Hawk 4th of July display) for 2018 with a 6.9 % increase since over the 2017 contact which held steady for the past three. The increase is due to production cost from overseas suppliers.

City Clerk/ Administrative Services Director Melissa Greiner who presented the requested was given an unanimous approval by the Council for Resolution 13-2018.

Mayor Spellman requested that the Council approve the $200,000 budgeted BID marketing money for the City of Black Hawk Business Improvement District. Even though they did not meet their 2017 benchmark from gaming revenue, the City still provided the rebate for devices, despite a lower than hoped for income from gaming machines and table games in the City of Black Hawk. The City still provided the funds to maintain the Business Improvement District. This motion passed unanimously.

The City of Black Hawk City Council meeting for Wednesday, January 24, 2018 was adjourned at 3:20pm. The next meeting will be at 3 pm on Wednesday, February 7, at 211 Church Street in Black Hawk.

END_OF_DOCUMENT_TOKEN_TO_BE_REPLACED

Benefitting the county, schools, and much more By Don Ireland   This year marks the 30th anniversary of casinos opening in the former little mining towns of Black Hawk, Central City and Cripple Creek, Colorado. In those early years, smoking was allowed inside ... END_OF_DOCUMENT_TOKEN_TO_BE_REPLACED