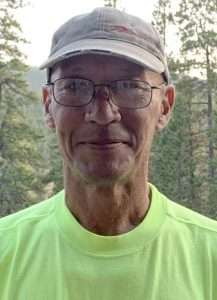 PRESS RELEASE – Doug Lupo, running for District 3 Commissioner on the Republican ticket, has lived on Wagon Wheel Trail in Gilpin County for eight years. He did most of his school years abroad and in Virginia, was a 60th Session graduate of the Northern Virginia State Police Academy, and is a 12-year Army Veteran. Lupo worked in executive management for 13 years including hotel, retail, restaurant and bar management. He also worked for the Gilpin County Transfer Station and is currently working for Grapes and Sons Excavating Company on the mountain.

Lupo lives here with his wife, Terri, and two Jack Russell dogs named Milo and Penny.  He worked as a Timberline Fire Board Member from 2018 to 2020 and is currently the VFW Post Commander in Central City and a member of the American Legion.

“My top goals are to undertake a comprehensive review on salaries in the County, stop the unnecessary spending, save and improve the operations of our facilities to include the Recreation Center, Library, Fairgrounds and the Justice Center. I would bring a medical facility to the County.

“I would improve Road and Bridge operations,” Lupo stated. Integrity and leadership need changing as well as the County’s over reliance on gaming money to survive. “I would like to recruit local talent for staffing as well as creating an opportunity for those Gilpin County employees that recently lost their jobs and livelihood to the layoffs.

“When I moved to Gilpin County, it was because of the small town feeling it gave – to basically get away from the city life,” Lupo wrote. The lower taxes and the beautiful surroundings only increased that feeling.

“I personally don’t want to see Gilpin County become another Evergreen or Boulder. We need a smaller and more efficient government. If I become Commissioner, I will do what you would expect me to do – represent you and your best interests, represent Gilpin County with my experience and utilize my compassion and understanding for the residents to bring our County through these hard times.

“I say NO to raising taxes – your voice is heard.” Contact Doug Lupo at DL1960@yahoo.com.

END_OF_DOCUMENT_TOKEN_TO_BE_REPLACED

Benefitting the county, schools, and much more By Don Ireland   This year marks the 30th anniversary of casinos opening in the former little mining towns of Black Hawk, Central City and Cripple Creek, Colorado. In those early years, smoking was allowed inside ... END_OF_DOCUMENT_TOKEN_TO_BE_REPLACED

Where the dead get to tell their story By Jaclyn Schrock On Saturday, August 21, the Gilpin Historical Society held their annual Cemetery Crawl. Tickets allowed the shuttle of hundreds of guests from the Teller House parking lot to the Cemetery. Depending on v... END_OF_DOCUMENT_TOKEN_TO_BE_REPLACED