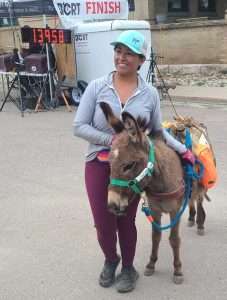 Why run a race leading a burro packed for prospecting? How did we get to the place where burro racing became Colorado’s Summer Heritage Sport? For eons of time on earth, the only way to sustain bread of life and shelter is to just do it. Living at all, took great effort and wisdom, and was most effective when working together with others in your home, community, and beyond.

Muscles of men, or helped by muscles of animals made positive things happen to sustain life. Skilled minds learned trades that used muscles and earthly elements to devise tools.

Effective methods of hunting, farming and mining with tools kept life sustained for thousands of years on earth. Dependence on the land is the only way to thrive.

Europeans moving to the newly discovered American continent were awestruck by the beauty and vast resources. It was untarnished by their way of living. The Native Americans respected and nurtured the land they depended on. The United States grew to be 33 states by 1861. The adoption of immigrant ways of living and industry came by dominating the land.

Perhaps it was partially this imbalance with the land and people that stirred up disruptions in the governing systems of the United States. Seeking independence to do thing differently from the government mandates, the Civil War began. Originally, seven southern states seceded from the US, but four more joined, for a total of 11 Confederate states. With the steam engine used for transportation on sea and land, war with guns and cannons ravaged the land and the people living on it.

When up to 750,000 soldiers had lost their lives in our Civil War, enough was enough. We tried to find balance again, with each other, but still abused the land.

May has been a time of year many communities and states remembered the lives of those lost in the Civil War, with Remembrance Day. We have just celebrated Memorial Day which compiles all the military and public servants who have lost their lives in the line of duty for our freedom in the United States.

So there is a tie between burro racing and Memorial Day.

The burro and the prospector

Burros (Spanish for donkey) were used by 19th century prospectors to carry the tools and supplies, led by a rope while the miner walked. As the story goes, two miners wanted to file a claim on the same ore rich area, but both had tried to race to town to file the claim.

So, the first requirements of the burro race began—the donkey can only carry supplies, and the person had to run on their own two legs.

Mules, horses, oxen and donkeys carried supplies for those hunting the “free gold” that began treks to Colorado and California.

Everything changed when the Civil War broke out. With the great loss of lives and livelihood over a 4 year period of time, the war had to end. With the Civil War over in 1865 and a need to rebuild lives, many hoped to follow the gold rush to the west and the 59ers to Colorado.

During the late 1860-70’s, for those choosing to work hard prospecting paid off, for some. Soon surface reserves of minerals with easy access were depleted. Other areas in the west were explored by the prospector and donkey. Those who used steam engines used the depleted areas to find great wealth as underground hardrock mining began. Donkeys were still used in some mines to pull the ore carts.

Many other donkeys were abandoned by disappointed prospectors, so many were running wild. Eventually most wild donkeys were captured or killed. Rescue ranches still have many burros available for adoption.

Since the 19th century, many of Colorado mining towns hold festivals in the summer to appreciate their wealthy resources of minerals, and the heritage that grew from towns abandoned when resources were depleted or were too costly to retrieve.

Many folks say burro racing originated between Leadville and Fairplay, going over Mosquito Pass. Jonas Schrock III, as a boy went with his mom and dad to such a race many years. Alternating years it started at Leadville or Fairplay. His dad bought one of the burros that raced one year for his youngest cowboy to learn to ride. The young man had many occasions of riding alone at age 5, or with dad, when a stubborn burro often required unsaddling and walk home alone.

The Western Pack Burro Ass-ociation (WPBA) has been facilitating the traditional burro race for many years. They organize the events, set the start and finish of the courses with trails along mines in the area, official track results and present awards by gender and age and all around timed scores.

WPBA maintains a careful overview to be sure both humans and animals are properly cared for with regards to safety and wellbeing.

Participants register for the event with WPBA. If a contestant does not have their own burro, they can rent one from ranches that keep them. They are delivered on the day of the race to the location. Burro lovers can always get acquainted with their burro with trial walks as the ranches welcome guest to build relationships and give exercise to the donkeys. Some are full size and some are smaller.

Many races include a longer and a shorter race. Participants have to weigh their burro before the race to verify the saddle is packed with the required weight load. There are check points on the race trails to be sure the donkey is still carrying its required load.

Races start and finish in town and can be about 8 to 26 miles.  The race course travels trails of old mines in the area with amazing scenic views. Marathon runners enjoy the comradery of the burro and other racers. Some racers simply walk.

Their 2021 racing season began in early April in Tennessee and also in California.

80th place is Bernadette. She has done many marathons and crazy races before her cancer. Last summer she finished her chemotherapy and radiation, so this is her first race since then. She had the burro named Jethro, who is best friends with Hank, Heidi’s burro. Heidi is Bernadette’s friend who dressed as a miner for the race and landed 83rd place. Bernadette’s husband provided details and what he has done being the “wait at the finish line cheering team.” He intends to get a burro of his own for the next race she enters.

See you on the trails!

END_OF_DOCUMENT_TOKEN_TO_BE_REPLACED

ShareTweetShare on Google+Pin on PinterestSend with WhatsApp
» Your mobile ad here!
20 recommended

END_OF_DOCUMENT_TOKEN_TO_BE_REPLACED

Benefitting the county, schools, and much more By Don Ireland   This year marks the 30th anniversary of casinos opening in the former little mining towns of Black Hawk, Central City and Cripple Creek, Colorado. In those early years, smoking was allowed inside ... END_OF_DOCUMENT_TOKEN_TO_BE_REPLACED

Where the dead get to tell their story By Jaclyn Schrock On Saturday, August 21, the Gilpin Historical Society held their annual Cemetery Crawl. Tickets allowed the shuttle of hundreds of guests from the Teller House parking lot to the Cemetery. Depending on v... END_OF_DOCUMENT_TOKEN_TO_BE_REPLACED