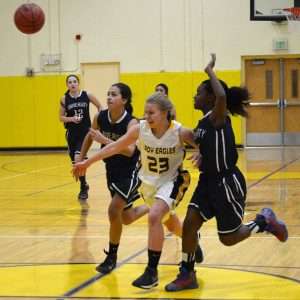 The Gilpin County High School girls’ varsity basketball suffered a 38-32 loss in a fiercely contested home court match with the University Bulldogs from Greeley on January 6.

The Bulldogs took an early lead, showing their offensive superiority as they ended the half at 20-13. Gilpin came back for the third quarter ready to battle, though, and the score was 29-27 going into the fourth quarter, when the Lady Eagles’ determined effort brought the score to a 29-29 tie. It looked like the Gilpin girls just might pull off a win, but it was not to be, as the Bulldogs pulled ahead with several free throws to win 38-32.

The junior varsity were also luckless, with a 31-10 loss.

The Gilpin County High School Cheerleaders were invited to perform at the Pepsi Center during the Denver Nuggets game on January 3. They performed during the pre-game show, which was sponsored by The National Cheerleaders Association.

“We were one of eight schools chosen for this opportunity,” advised Gilpin’s cheer coach, Joni Schmidt.

The girls practiced individually and as a team in preparation for the event. Schmidt commented, “As a direct result of their hard work, dedication and preparation, they were often called upon to demonstrate for the other squads attending the clinic.”

In addition to performing their routine at the pre-game show, four Gilpin cheerleaders also participated in the flag ceremony.

END_OF_DOCUMENT_TOKEN_TO_BE_REPLACED

Benefitting the county, schools, and much more By Don Ireland   This year marks the 30th anniversary of casinos opening in the former little mining towns of Black Hawk, Central City and Cripple Creek, Colorado. In those early years, smoking was allowed inside ... END_OF_DOCUMENT_TOKEN_TO_BE_REPLACED

Where the dead get to tell their story By Jaclyn Schrock On Saturday, August 21, the Gilpin Historical Society held their annual Cemetery Crawl. Tickets allowed the shuttle of hundreds of guests from the Teller House parking lot to the Cemetery. Depending on v... END_OF_DOCUMENT_TOKEN_TO_BE_REPLACED