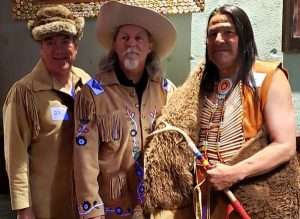 Most of us have an image in our minds of Buffalo Bill. The name draws up recall of a frontiersmen who has plenty of stories told about him, some even included truth. He is best known for demonstrating life in the late 1800s to the world with Buffalo Bills Wild West Show. A cowboy band made the music for events that included bronc riders,reenactments for races, ranch life, Indian stage coach raids, white man and Indian battles, and even Custer’s Last Stand. Versions of the show in the US and internationally ran between 1872-1917, often beginning with a big parade of riders representing many cultures and riding techniques. Music and theatrical stories featured trick riders and sharp shooters like Anny Oakley and Calamity Jane. Chief Sitting Bull, with 20 of his braves and families set up camp in each location as they did on the plains. Traveling with many donkeys, horses, cattle, and buffalo, the Wild West Show toured the world, enthralling audiences everywhere with the West.

Many of the depictions of the West were based on William Cody’s experienced as an 11 year old lad herding cattle, driving wagon train crossing the prairie, confronting Indians, and other adventures. At age 17, he became a Union scout in Civil War, being too young to enlist in regular army. Later, working for the Kansas Pacific Railroad, he also hunted buffalo for them to feed the workers, where he earned the name “Buffalo Bill” having won the contest to kill the most buffalo in eight hours against Bill Comstock.

These were the tales that entertained in print and on stage.

Ted Buntline interviewed William Cody and “Wild Bill” Hickok, and without informing them, he then wrote a series of stories in the newspaper and dime novels to thrill the nation with stories of the West based on his character. In December 1872, Cody and Texas Jack Omohundro went to Chicago to begin performing on stage, The Scouts of the Prairie, produced by author and reporter Ned Buntline. In 1873, Wild Bill Hickok joined the group as they recreated the story as Scouts of the Plains. Hickok dropped out before finishing the season, preferring gambling to performing. The show went on, adding Texas Jack’s sweetheart wife, Italian ballerina Giuseppina Morlacchi in 1876. After doing a show in Leadville, Colorado, they decided to winter there, where Texas Jack passed away from pneumonia.

This is likely the show that came to Central City’s Opera House, July 30, 1879 and April 2, 1886, known as Buffalo Bill’s Combination acting troop. From 1884-1908, Buffalo Bill’s Wild West entourage of animals, Indians, and cowboys traveled by train, often performing in a tent. In Wyoming, there were many shows held with European royalty that strengthened relations with the US.  Seasonal theater acts collided with scouting and hunting at times.

Buffalo Bill and his family had been based out of Rochester, NY, but with his show earnings, he purchased land in Nebraska to provide a home for his performers and animals during the off season. His son-in-law showed him the valley that forked off Shoshone River viewed from Bighorn Mountain in northern Wyoming. Other business men from Sheridan, WY and Cody invested here, to create a new town. With the railroads arrival, Cody, WY quickly developed near Yellowstone. The states which honor him include: Iowa, (his birth place) Kansas, Nebraska, Minnesota, South Dakota, Colorado, and Wyoming.

Four different presidents have publically recognized the benefits to America William Cody made.  Deep respect is demonstrated in museums, statues, rodeos, pioneer villages and much more throughout the West. Many places even have their own Buffalo Bill Days. Because Cody wished to tell the world about the many changes he saw in the West, he perpetuated the stories began in the newspapers, taking it to the stage and eventually to the outdoors. His passion was the life he lived in the west. This included the depletion of the buffalo herds to the mining booms, pioneering and effects on the Native Americans, our Civil War, and more.  The challenges, adventure, history making and even greedy disrespecting of Native Americans and nature with mining, timbering, fur hunting, and settlers moving west has become memorialized as the ways of the American West through many tales and shows.

February 26th was Buffalo Bill’s 173rd birthday, celebrated at the Rock Rest in Golden on Saturday, February 23rd from 11 a.m. – 3 p.m., produced by Monarch Productions, Western Themed Events, and Old West Living History. The event was sponsored by Monarch Productions, Buffalo Bill Days of Golden, Colorado and others. Locally, Buffalo Bill Days is held the last weekend in July. This year, the dates will be July 25-28, and is the much anticipated celebration with the parade on Saturday through downtown Golden. The event includes quick-draw competitions, a car show, food vendors and many other entertaining acts in honor of Buffalo Bills Wild West Show.

The City of Golden celebrates Buffalo Bill primarily because he chose to be buried above Red Rocks on Lookout Mountain to look out at the vast creation of the plains. When Buffalo Bill died in Denver on January 10, 1917, his wife, Louisa Cody, received the role of finalizing the estate. Mrs. Cody, their daughter Irma, his younger sister Mary Cody Decker, and family friends agreed William Cody had requested to be buried above the Red Rocks on Lookout Mountain. Other family members and residents of Cody, Wyoming disagreed, saying he should rest in the town he founded.

The Rock Rest was an ideal location to celebrate the 173rd birthday of William F. Cody. The building still houses a thriving business originally opened during the 20 years of  touring Cody did to thrill the US and world with the charms and challenges of the western frontier. The “Romance of the West” still lives in the old original building.

Golden’s Rock Rest opened in 1907 according to www.rockrestlodge.com. Old miner’s maps show a trading post and stage stop, labeled Rock House Rest, existing about 1885 at what we now call 16005 W Golden Road, Golden, Colorado. Local folks claim the stone front building was called the Rock Rest, as the 1890 census supports.  Just east of the Rock Rest, in 1903 the Colorado National Guard opened its only permanent training facility called State Rifle Range, later developing into a post, also for storage and supplies. The Guards summer encampments were located just down the way from the Rock Rest from 1906 to 1944. 1934 the post was renamed Camp George West. As the Guard Post grew, so did the Rock Rest.

In 1907, local legend, Len “Stump Puller” Johnson built onto the Rock Rest stage stop and trading post with a lodge, ballroom, and private brothels. The Rock Rest was a recreational stopover until Buffalo Bill was put in his grave in 1917. Johnson retired to Sweden then, before the Guard expanded their post. The new owner, shady Jimbo Thraker capitalized on the gambling and brothel income. The Rock Rest could have been considered an extension of the Guard Post, with the officers found there.  In 1923, Thraker was killed in a barroom brawl and the place went through a few owners, falling into disrepair. George Morrison revived the Rock Rest during the Great Depression, leading his band as a fiddle player. The KKK threatened to blow up the Rock Rest with the Catholic African American, who played with Louie Armstrong there. Max Heeley, a local heavyweight boxer then took over the Rock Rest. When his dog went into a cavern under the building, Max went in after him and neither were seen again. Story’s tell of the howling that is heard on particularly windy nights, now that the cavern has been closed.

Currently, the Rock Rest has two large rooms, with a kitchen, an historic front bar, and an elegant ancient back bar. The walls are covered with old and new pieces, stuffed animals, photos, maps, signs, and portraits of ladies. There are a few undergarments hung from antlers, a stage, dance floor, and a pole for ladies dancing only. There are college students that keep the place busy as well as older folks who are intrigued by the nostalgia and convenience of good food and drink along the way.

Buffalo Bill Days of Golden, Colorado is a volunteer group who serve Golden’s Chamber of Commerce to organize the annual July festivities that bring many locals and travelers to celebrate the life and contributions to the West of William Cody. Celebrating his birthday the end of February has been a winter event at the Rock Rest a few years now. Monarch Productions contributes to the organization and facilitation of both the summer and winter events.

The Buffalo Bill Saddle Club began making annual horseback rides from Golden up to Buffalo Bills Grave in the 1940’s. They began to ride through main streets in Golden on the return trip, so the parade began. When the 1960’s cherished the western themed events, Golden Chamber of Commerce hoped to draw more attention to the area to make Buffalo Bill Days a community wide event, according to information at https://buffalobilldays.com/about.php.

This year, live music was provided with older tunes by the talented guitar playing and singing David Frisk. Many guests accepted the open invitation to attend the celebration wearing western attire of the Victorian Era, the late 1880’s to early 1900s. John Wayne was there, with natives and military and presidential figures represented. There was cake and a fine menu to choose from the kitchen and the bar, and door prizes were won by raffle tickets purchased at the price you offered to pay. Donations were also collected for a Rock Rest employee in need of medical care.

END_OF_DOCUMENT_TOKEN_TO_BE_REPLACED

Benefitting the county, schools, and much more By Don Ireland   This year marks the 30th anniversary of casinos opening in the former little mining towns of Black Hawk, Central City and Cripple Creek, Colorado. In those early years, smoking was allowed inside ... END_OF_DOCUMENT_TOKEN_TO_BE_REPLACED