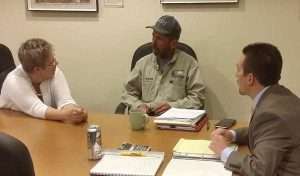 Manager Miera began the session by directing Council’s attention to some changes and corrections made from the initial proposed budget. One such correction was to the fire department uniform line item which now reads $3,500 for 2015. The first budget submitted showed the expense as $35,000; the volunteer fire department may have enjoyed the misplaced decimal point, but the City could not validate a 900 percent increase over 2014. With this correction, the ending General Fund balance flipped to the positive at $4,500. The stated goal is to get the General Fund balance to be around $700,000 by the end of 2015. Whatever is left in the General Fund would then be applied to capital improvements.

As the budget numbers were explained, several questions were directed toward staff in matters of definition, allocation, and significant differences from the 2014 Budget. Alderman Gaines questioned why the general property tax revenues were decreasing. Director Flowers answered that property valuations have been trending downward and they fully expect assessed values to go down again in 2015. Alderman Heider asked for clarification on how much sales tax revenue is from marijuana product sales. Director Flowers stated that marijuana revenues expect to be about $86,000 in 2015 which is less than 2014 projections due to an expected fall in overall sales.

Superintendent Griffith fielded a question from Alderman Gaines regarding the rockslide. Gaines asked if it were possible, or if it would have been possible, to sell any of the rocks from the rockslide. Griffith responded saying that almost all of the rock was decomposed granite which easily fractures and is not viable. Any rocks found to be useable were repurposed by the City as rip rap. Alderman Heider then asked about the neatly placed large boulder formation northwest of the slide. Griffith said that was actually to prevent traffic from using the area. The boulders are on property owned by Robert Young. Shawn added that the seed came in today and they will be seeding the area this week.

After a question about grant monies and which line item they belong to, Manager Miera updated the Council on the status of the FEMA grant money for the Parkway. Miera explained that FEMA wanted the City to pay its $371,000 by January, so he turned around and explained to FEMA why they would not be able to make that kind of payment within their timeframe. Through continued discussion, FEMA has come to an understanding that their calculation of grant money does not take into consideration some of the costs peculiar to this area and are reconsidering their grant amounts. FEMA has granted the City an extension through November 2015; after which, Central City can apply for an additional extension is necessary.

One of the items discussed this evening was Parkway access points. Monies allocated to city planning were the catalyst of the discussion in which Manager Miera stated that access to and from the Parkway along the stretch bordering the KOA Campground does not in fact hinge upon Gold Mountain Village Apartments being taxed as part of the Business Improvement District. BID taxes would be assessed on any commercial properties that benefit from Parkway access and this would include the KOA Campground. Manager Miera has talked to the owner of the campground and found that the owner realizes his gain from that access point and would consider accepting the tax arrangement. The apartments; although considered commercial property, are also classified as high-density residential and agriculture and therefore, exempt from the BID tax. Mayor Engels exclaimed, “In ten years, this is the first time I’ve heard that the apartments may be exempt from the tax.” Alderman Gaines added “So it sounds like contrary to what we’ve been led to believe, there is some wiggle room.”

During the review of the Police Department budget, Alderman Heider asked, “I was wondering if we’re risking having dirty cops with the elimination of the uniform cleaning line item?” Humor is not entirely absent during budget talks. Director Flowers did answer that the line item was for dry cleaning when the type of uniforms required the extra care. The current uniforms do not need dry cleaning. Alderman Heider replied, “So our officers are wash and wear now.”

This work session also tackled items in the General Fund. As such, the Council talked long into the night. A future work session will focus on capital improvements.

The regular Council Meeting scheduled for October 21 was cancelled.

END_OF_DOCUMENT_TOKEN_TO_BE_REPLACED

Where the dead get to tell their story By Jaclyn Schrock On Saturday, August 21, the Gilpin Historical Society held their annual Cemetery Crawl. Tickets allowed the shuttle of hundreds of guests from the Teller House parking lot to the Cemetery. Depending on v... END_OF_DOCUMENT_TOKEN_TO_BE_REPLACED