Bringing hope where there is no hope 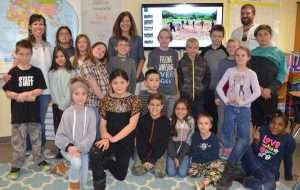 Part one of a two-part series.

Guatemala is a long ways from Gilpin County – in both distance and lifestyle. Youngsters at Gilpin Elementary School learned a bit about life in that Third World country on Wednesday, February 13, as Gilpin resident Josh Bloom visited the children in Elizabeth Hamilton’s second grade class and Susan Sepanik’s fourth grade class.

Bloom told about the Seed Project, an undertaking that showed people in the small village of San Francisco, Guatemala, that someone cared enough about them to help them improve their difficult lives. As Bloom engaged the students with questions and anecdotes, they busily took notes and compared his information to what they had been learning about ecosystems and food webs. The children also discovered how a simple engineering system could help feed a community of 1,000 people.

Bloom’s experience is in industrial and commercial construction all around the United States. He also spent four years working with Youth With A Mission (YWAM) in Texas and in Gilpin County. He has served in Hungary, Romania, Malaysia, Viet Nam, Guatemala and other countries and has assisted with disaster relief in the southern U.S. following Hurricane Harvey and Hurricane Michael. He and his family moved here from Texas about a year and a half ago. His wife Hilary works as a paraprofessional at Gilpin Elementary School, and his children attend at Gilpin.

Bloom gave the kids a brief geographical introduction about Guatemala, which is located in Central America and bordered by Mexico, El Salvador, Honduras, Belize, the Pacific Ocean and the Caribbean Sea. The kids knew that its people speak Spanish but were surprised to learn that actually, 23 different languages are spoken in Guatemala and that the people are descended from the Mayan Indians.

The Seed Project would help care for the people’s basic needs, Bloom explained.

“The villagers’ community had little food, and the ground they were farming was overused and depleted of nutrients, so food wasn’t growing well. Our group went to teach them a new way to farm so they could have a better economy. This will help them feed their people.”

Bloom traveled to the area for two weeks in late September 2018 to lay out the project. Mountains formed a backdrop for the flat area in which a 19 by 8.5-foot pond would be built to house 5,000 tilapia fish. After he returned to Gilpin, the Guatemalan villagers dug a hole for the pond by hand. Bloom returned in late November to complete the construction.

He and his project partner, a Brazilian named Isaac Sabioa, and other workers poured a cement floor, stacked concrete blocks for the pond walls, and cemented the blocks together. Water was pumped from a nearby river to fill the pond. A system made up of a generator, a pump, and pipes transported the pond water to surrounding rings of plant beds where vegetables would be grown.

How would tomatoes, peppers, cabbage, and cilantro grow in the nutrient-poor soil? With a little thought, the kids realized that fish not only swim, they also eat and poop and make the water dirty – and full of nutrients.

The project includes pens for ducks and chickens, whose waste will also be used for fertilizer. Ducks will be allowed in the pond to add to the waste consumed by the fish and to oxygenate the water by splashing in it. The people will be able to use their nets to catch the fish for food.

The total area of the pond and garden is 3/4-acre, which is a little over half the length of Gilpin’s football field. In that small space, enough vegetables, fish and poultry will be grown to feed 1,000 people, and the system is simple enough to enable the people to do their own repairs and maintenance.

Bug zappers placed on chains that are stretched over the pond are a practical bonus. Malaria, carried by mosquitos, is a concern in the area. At night, the bug zappers are lighted to attract the mosquitos, which get zapped and fall into the water, where they are eaten by the fish. This cuts down on malaria and feeds the fish at the same time.

The kids were fascinated by the many ways that life is different in the Guatemalan village than it is here. The terrain is mountainous, as in Gilpin County, but it is very volcanic. In fact, the Fuego volcano near the capital of Guatemala City erupted in 2018.

Kids in Guatemala go to school, but their school buses are far different from the standard yellow vehicles seen around Gilpin County.

“They are painted bright colors, and there’s a lot of chrome and music blaring from the buses. It’s neat!” Bloom exclaimed.

A major difference is the food. Students guessed that the villagers might eat corn.

“Yes, they eat a lot of corn. But we’re helping them grow other types of vegetables because corn doesn’t have a lot of nutrients,” Bloom said.

The people bring corn to their houses each morning and take it off the cob. Then they take it to the village mill and grind it into a powder with which they make tortillas, a staple present at every meal every day.

Some of the food was stranger than tortillas to Bloom’s Western palate. “What is the most disgusting thing you’ve ever eaten?” he asked the kids.

Answers included crab, octopus, cricket – and broccoli. Those were tame in comparison to what Bloom was served.

“I ate whatever they gave me. Every day there was something new, although it was normal to them. One dish had tomato sauce on the bottom and something on it that looked like an omelet. They watched to see if I would eat it, and I did. It turned out to be a little tilapia fish that they scaled and rolled in egg and fried whole, with head, eyes, fins, and guts.”

Children must work at a young age. Girls balance baskets on their heads and take laundry to the river for washing. They also make clothes by hand. When the villagers learned that Bloom had a wife, the women and girls made her a blouse and skirt. Hilary Bloom wore the colorful skirt over her jeans for the Gilpin students to see. She untied the sash and held the skirt out to reveal its blanket-like shape.

A walk or drive down the very narrow roads could reveal a surprise around every bend, from little kids to cows, horses, dogs, or pigs, which Bloom described as trash collectors. They don’t have garbage pickup there, so the pigs stay on the roads and keep them clean.

“The people take a Y-shaped stick and put it over the pig’s head and tie a rope to it, making a kind of harness so they can’t get through the fences that border the road.”

People’s backyards are like a complete ecosystem. There are lemon and lime trees, coconut palms, pigs and chickens. People construct homes of bricks made of mud and grass, smooth cement over that, and paint it. Bathrooms are outhouses separate from the main home. Kitchens are also separate and open for cooking over a wood fire. There is no hot water, so if you want to take a shower, you go outside and pour a cup of water over yourself, standing in the midst of the dogs and pigs. People are lucky if they have electricity, and there might be one television in a whole village.

Some are fortunate enough to have a big pile of corn in their yards, for that means wealth. Guatemalans don’t have much money. Most Americans make a reasonably good living, but in Guatemala, people make the equivalent of about 62 cents a day. Students examined a quetzal, paper money named after the Guatemalans’ national bird. It takes nearly eight quetzals to equal one dollar.

Bloom pointed out that American children can dream of what they want to be when they grow up, whether it’s a cop, a firefighter, or whatever. In Guatemala, there are no jobs, no stores or factories. The people have no idea of the future beyond simply surviving.

That is the reason Bloom helps.

“I go to bring hope where there is no hope. The main idea is to show them love through the pond, the animals, and the plants. The project creates jobs, and they can have food and take care of themselves. They will grow extra food and can sell that to buy more of what they need.”

Part 2 will show how a dream comes to fruition.

END_OF_DOCUMENT_TOKEN_TO_BE_REPLACED

Benefitting the county, schools, and much more By Don Ireland   This year marks the 30th anniversary of casinos opening in the former little mining towns of Black Hawk, Central City and Cripple Creek, Colorado. In those early years, smoking was allowed inside ... END_OF_DOCUMENT_TOKEN_TO_BE_REPLACED

Where the dead get to tell their story By Jaclyn Schrock On Saturday, August 21, the Gilpin Historical Society held their annual Cemetery Crawl. Tickets allowed the shuttle of hundreds of guests from the Teller House parking lot to the Cemetery. Depending on v... END_OF_DOCUMENT_TOKEN_TO_BE_REPLACED