Bring decency and morality back to the government 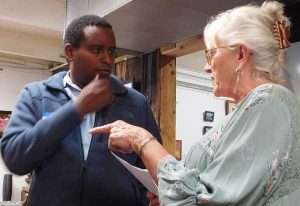 On Sunday, July 29, 2018, Gilpin’s reigning Democrats held their annual fundraiser in Washington Hall Gallery to fund local, state, and national campaigns; but it also brought a unity of expression desiring change in the political culture. Candidate Joe Neguse, running for U.S. congress in the 2nd congressional district, says he is “trying to bring decency and morality back to the government.” Neguse was one voice of many to reflect the concern that politicians at all levels have lost a sense of ethical decency.

All three of Gilpin County’s Commissioners were there to support their party and their cause with Commissioner Linda Isenhart acting as master of ceremonies. With nine candidates speaking, Isenhart kept the evening flowing and gave plenty of time to bid on items for the silent auction and to interact with the candidates. The silent auction proceeds go directly to the campaigns of local offices.

Locally, candidates for Assessor, Treasurer, Clerk and Recorder, and Commissioner, all voiced their reasons to be elected (or re-elected as the case may be); with the exception of County Coroner Zane Laubhan who was out of state consulting with a forensic entomologist on the life cycle and digestive qualities of maggots in determining a time of death. Laubhan, along with Anne Schafer and Linda Isenhart are incumbents for their races desiring to hold on to their elected positions. Schafer has been serving as the County Assessor for 15 years and strives to maintain fair and equitable value of property and taxation. With many years of service, she has “an outstanding staff of experts” to back her up. Isenhart is running for her second term and still has some “irons in the fire,” including wildfire preparedness and mental health services, she hopes to finish if re-elected. Isenhart won her position by eight votes in the 2014 election and knows that every vote counts. Local candidates vying for new positions are Susan Berumen for Treasurer and Sahari McCormick for Clerk and Recorder. Berumen says she can bring efficiency and modernization to the office, and she should know since she has been working in the treasurer’s office for quite a while now. McCormick states her positive attitude compliments a perfect background to be the Clerk and Recorder. She has a degree in business management and manages commercial accounts for five radio stations. Sahari says she will bring enthusiasm and a culture of teamwork to the position.

On the state front, candidates for treasurer, board of education, and senate, along with the current president of the state senate, were encouraging their party members to support their campaigns. Dave Young, running for Treasurer, is a Junior High School teacher of sciences, technology, and mathematics. He has an uphill climb since his teacher’s salary does not allow for many personal contributions for his campaign, but he is fervent about having a sustainable PARA plan going forward, and to make changes to the TABOR and Gallagher amendments that are creating “a chokehold” on the state by raising taxes on wealthy individuals and corporations. Angelika Schroeder, running to retain her seat on the State Board of Education, and Tammy Story, running for State Senate in SD 16, both gave traditional speeches about the importance of keeping Democrats in control. State Senate President, Morgan Carroll, reminded folks that they have enabled 16-year-olds to pre-register to vote and the voting movement among high-schoolers is growing rapidly. Carroll says this coming generation will shape the future of our elections.

The highlight of the evening was having candidate for U.S. Congress, Joe Neguse, speak to his supporters. Neguse’s parents were immigrants to the United States and he remembers the struggles they had making a living. Joe visited his dad recently and said his dad is very proud and overwhelmed that an immigrant’s son is running for U.S. Congress; “Only in America,” he said. Neguse commented on the current political climate saying, “our freedoms are at risk” and “every single right we hold dear is at risk.” Healthcare, personal safety, safe and highly-qualified schools at every level, and clean water and air Neguse exemplified to support his statement. Joe’s family moved to Colorado when he was very young, and he considers himself to be “Coloradoan thick and through.”

Regardless of your party or your personal views, it seemed obvious that most of the people at the fundraiser had one thing in mind; providing the best services and plans for the people of this county and state. While you can disagree about how to get there, there is common ground that people from all backgrounds can agree; that the quality of our lives, and our future, is important. It takes courage to not only run for office, but to face the guaranteed criticisms and complaints of how you go about it, in the name of trying to make a better world. One thing is clear, if you do not make your voice heard, no one will listen to you.

END_OF_DOCUMENT_TOKEN_TO_BE_REPLACED

Where the dead get to tell their story By Jaclyn Schrock On Saturday, August 21, the Gilpin Historical Society held their annual Cemetery Crawl. Tickets allowed the shuttle of hundreds of guests from the Teller House parking lot to the Cemetery. Depending on v... END_OF_DOCUMENT_TOKEN_TO_BE_REPLACED