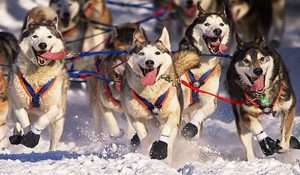 Since the inception of the Iditarod Trail Sled Dog Race in 1973, hundreds of competitors have come from around the world to make the 1,100-mile run from Anchorage to Nome. Between 60 and 100 teams compete in the event, but the dogs and their mushers can’t do it alone. The efforts of hundreds of volunteers are required. At Peak to Peak Rotary Club’s January 17 meeting, one of those volunteers told of his experiences in helping with the 2007 Iditarod.

The Rotary Club met at noon at Farradday’s Steakhouse in the Isle of Capri Casino in Black Hawk. Jim Langsted, who lives in Coal Creek Canyon, joined the group for a slide presentation and a riveting narration of his time at the Iditarod, also known as The Last Great Race. Aside from relating his own experience, he presented some history of Alaska and the Iditarod. (Please see a separate article with more information in this edition of the Weekly Register-Call.)

Langsted first worked the Iditarod in 2004 in Galena as a “villager.” Villagers assist the Iditarod trail committee at the checkpoints. They help guide the dog teams in and out of the rest location; bring straw, supply bags, and water; clean up the straw (and dog poop) after the teams leave; and do other support activities needed. In 2007, he worked on the trail committee and did communications. He hopes to return a third time, if possible.

Langsted, a former dog owner, got involved through a good friend from Coal Creek Canyon.

“He has a daughter that lives in Galena, Alaska,” Langsted related. “He and his wife told me about their many trips up there to help with the race. They offered to let me go with them in 2004.”

The Iditarod begins the first weekend in March. The 2019 race starts on March 2. Although it has been several years since Langsted offered his time and talents at the race, most of the procedures are the same now as they were then.

In 2007, there were 85 teams, including 1,000 dogs. Mushers drew for their start positions, with selections being made in the order of musher registration. Teams ran for ten to 12 hours per day, averaging about ten miles per hour. Lance Mackey won the race that year, taking just nine days to cross Alaska (the last finishers took about two weeks). His prize was $50,000 and a Dodge Ram truck.

Langsted explained that there are actually two starts to the race. The first is a ceremonial start in downtown Anchorage, Alaska’s largest city. Teams start every two or three minutes. In 2007, the second start – the start of the real race – was on the following day in Willow.

Why two starts? Once the teams leave the second start, it is difficult for spectators to see the race because of the trail’s remoteness. So thousands of spectators and news media members turn out in Anchorage to watch and cheer. Mushers are there with dogs, sleds, gear, and an entourage of handlers.

“The restart is typically in Wasilla, but in 2007 there was not enough snow, so the restart was moved to Willow. This happens in other years as well,” Langsted said. “The mushers are responsible for getting their teams to the restart.”

The course runs up the Alaska Range into the sparsely populated interior and then along the shore of the Bering Sea, finally reaching Nome in western Alaska. The trail goes through tundra and forest, over mountain passes, and across rivers. Most of the route passes through widely separated villages.

In even-numbered years, the race proceeds along a northern route to Galena. In odd-numbered years it goes to Iditarod, which is actually a ghost town.

Basically, the “roads” the teams run on are packed snow machine trails, Langsted explained. Most travel in Alaska is actually done by plane. In fact, many of the mushers live in the interior of Alaska and fly to get to the race. The Iditarod Air Force, a local group of pilots, provides flying support.

The next day, Langsted went to the restart in Willow and did a shift directing traffic. He was then able to watch some of the mushers restart at the real starting line. The next day he and communications teammate “Jim” from Chattanooga, Tennessee, flew from the Anchorage airport to McGrath, 311 miles from the start, in a Cessna 9.

The next day, they went from McGrath to the checkpoint at Iditarod in a Cessna 180, which was equipped with skis so it could land on the frozen river. With temperatures at about -10 degrees during the day and -25 after sundown, “we were told to dress in Arctic gear in case the plane went down and we needed to spend the night!”

His Iditarod checkpoint was a wooden “tent” on the frozen river. They were never sure when the mushers would be coming through, so they kept watch out the window. There were about eight hours between the checkpoints, but mushers might need to stop along the way.

Langsted communicated from Iditarod to McGrath via ham radio, where data was then sent to headquarters. In the past, many of the villages and the unpopulated checkpoints did not have telephone communications available. Ham radio was used to link these checkpoints with other locations that could ultimately get the information back to Anchorage. 2007 was the final year for ham radio; today, satellite communications and Internet connectivity allow voice and digital data transfer.

Langsted said the communications team provides 24-hour information transfer between each checkpoint and race headquarters. Musher information (bib number, time in, number of dogs in, if they have declared an eight or 24-hour break, time out, number of dogs out) and logistics (dogs dropped requiring transport back to Anchorage, food, water, supplies needed, medical emergencies ) are transmitted.

The mushers start with 16 dogs per team. Each sled team, from sled to lead dog, is 80 feet long. As mushers arrive at the checkpoint, they grab the gear bags they have shipped ahead and look at race clipboards to see how their competitors are doing. The first to reach the Iditarod checkpoint – 432 miles from the start and the halfway point on the southern route – wins $3,000 in gold nuggets.

There are four rules each musher has to know:

First, they are not allowed to help each other (although they can accept help from residents of villages along the trail).

Second, they required to stop at each checkpoint. In 2007, there were 21 checkpoints.

Third, mushers must account for all their dogs at each checkpoint.

Mushers spend four or five hours at some checkpoints, including feeding and bedding their dogs and eating or catching two or three hours of sleep themselves. They can camp on the trail instead, and many do, resting in a sleeping bag on their sled. The dogs are left hooked to their lines during a campout so they don’t run off and not come back.

The dogs burn about 20,000 calories a day. Mushers prepare a mix of water and dog food in a cooker warmed by Heet alcohol fuel.

Each dog gets checked out by a veterinarian at each checkpoint. If a dog is not doing well, it is taken out, or dropped. Dogs can be dropped off along the way at the various checkpoints due to health concerns, being too tired to eat, or other issues. Volunteers at the checkpoints care for the dogs until the animals can be flown back to Anchorage. By the end of the race, most teams have just six to eight dogs. Unfortunately, Langsted indicated, one or two dogs die about every other year from health issues or from getting tangled in the lines.

The mushers mostly breed and raise their own dogs, who are not pets but rather are working dogs who just love to run.

“They are not huskies,” Langsted said, “but some are a huskie mix. These are skinny, 35-pound dogs with strong, long legs. Teams train year around, using wheeled vehicles during the summer.”

Racing in the Iditarod requires an outlay of about $100,000, not including the cost of the dogs themselves. A fast, intelligent lead dog is very valuable and costs $40,000 to $50,000, Langsted advised. Most of the mushers engage sponsors to cover their expenses.

END_OF_DOCUMENT_TOKEN_TO_BE_REPLACED

Benefitting the county, schools, and much more By Don Ireland   This year marks the 30th anniversary of casinos opening in the former little mining towns of Black Hawk, Central City and Cripple Creek, Colorado. In those early years, smoking was allowed inside ... END_OF_DOCUMENT_TOKEN_TO_BE_REPLACED