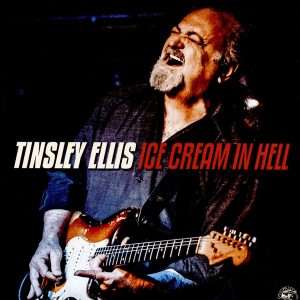 Atlanta-based blues-rocker Tinsley Ellis released his new Alligator Records CD, Ice Cream In Hell, on Friday, January 31. He’ll perform in Central City on February 21 and 22 at 8 pm each evening in the Mile High Room, free admission courtesy of the Grand Z Casino. Ice Cream In Hell is the 18th album of Tinsley’s almost four decade career. The album was produced by Tinsley and Kevin McKendree, the great Nashville-based keyboard player who has also produced John Hiatt and Delbert McClinton. Filled with blazing, every-note-matters guitar playing over the course of 11 instantly memorable original songs, Ice Cream In Hell is, according to Ellis, “the most raw-sounding, guitar-drenched album of my career.”

Throughout the album, Ellis’ deeply emotional, lyrical guitar solos perfectly match his fervent vocals. The songs range from the nod to Stax-era Albert King, Last One To Know, to the Peter Green-flavored Everything And Everyone to the Hound Dog Taylor-esqe romp Sit Tight Mama before ending with the hair-raising, slow-burning ballad Your Love’s Like Heroin. Though inspired by all three Kings (B.B., Albert and Freddie), as well by Carlos Santana, Hound Dog Taylor and others, Ice Cream In Hell is pure, unadulterated Tinsley Ellis.
Upon release of the new album, Ellis will hit the highway for a coast-to-coast four month tour, bringing his roof-raising music to fans wherever they may be. “A musician never got famous staying home,” says Ellis, who continues to perform over 150 nights a year. He is a high energy performer who delivers his lyrics and solos with both power and subtlety for maximum impact. He will perform songs from Ice Cream In Hell with the same fervor you hear on the album.

For more information, call 800-924-6646 or check out their website at www.grandzcasinohotel.com.

END_OF_DOCUMENT_TOKEN_TO_BE_REPLACED

Benefitting the county, schools, and much more By Don Ireland   This year marks the 30th anniversary of casinos opening in the former little mining towns of Black Hawk, Central City and Cripple Creek, Colorado. In those early years, smoking was allowed inside ... END_OF_DOCUMENT_TOKEN_TO_BE_REPLACED