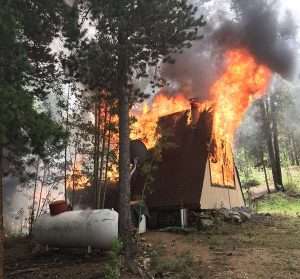 At 11:55 a.m., Friday July 12, a Timberline Volunteer Fire Fighter called in a concern seeing smoke, followed by a 911 call in the area of Blue Spruce Road and Highway 119, near Roy’s Last Shot. Without details of the fire, Timberline Fire responded with a command vehicle, two fire engines, two water tenders, and two Type 6 brush trucks with limited water supply on each. This was a large variety of apparatus, but with no confirmation of the type of fire the department was responding to, it was necessary to cover all the bases.

It turned out to be a structure fire, which was about 40% engulfed when the first apparatus arrived on the scene. The first priority was to determine that no occupants or pets were inside the structure which had been an occupied home. By the time sufficient fire-fighting apparatus and personnel were able to make it to the fire, the home was 100% engulfed.

The area trees and brush were targeted as the initial defensive maneuvers for the fire. The perimeter was protected, although there was some forest that could have ignited from the heat had the fire been allowed to continue unchecked. The fire fighters and equipment were able to contain the fire. By about 4:00 p.m., thermal imaging and a thorough check had verified that no hot spots remained, so firefighters were able to leave the scene.

Golden Gate FPD responded by sending an engine to assist with coverage of the district while Timberline was engaged at the fire. Nederland Fire sent an additional water tender, and the Forest Service sent an engine from Idaho Springs to assist in the event the incident evolved into a wildfire. The Forest Service also provided a command vehicle which provided cooperative support on scene. Gilpin Ambulance provided an ambulance for medical support in the event that a firefighter was injured.

The cause of the fire is under investigation. The occupants, home owners, neighbors, and friends are thankful for the combined efforts of all involved to keep our mountain community safe.

Gilpin County has been fortunate to have avoided forest fires for many years. Being prepared, working together as a community, and home owners maintaining fire mitigation near our homes helps to keep our fire danger down. Supporting the Timberline Fire District auxiliary also helps our firefighters with food and support, along with numerous other emergency response agencies to be equipped to do their job well.

Timberline Fire provides emergency services to rural Gilpin County as well as parts of Boulder County. The last structure fire in Timberline’s district was Christmas night 2018, and was located in the Dory Lakes subdivision. In the past year Timberline has responded to three structure fires along with a handful of small wildfires. We are thankful that Timberline Fire Department, Gilpin Ambulance Authority, and the Gilpin County Sheriff Department have kept us safe!

END_OF_DOCUMENT_TOKEN_TO_BE_REPLACED

Where the dead get to tell their story By Jaclyn Schrock On Saturday, August 21, the Gilpin Historical Society held their annual Cemetery Crawl. Tickets allowed the shuttle of hundreds of guests from the Teller House parking lot to the Cemetery. Depending on v... END_OF_DOCUMENT_TOKEN_TO_BE_REPLACED