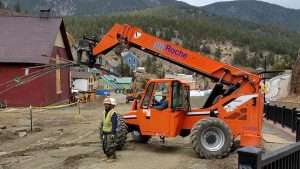 The Regular online meeting of the Black Hawk City Council was all about water and the right to use it.

Black Hawk City Water Engineer Jim Ford presented Council Bill 10 that involves an Ordinance approving the Church Ditch/ Farmers High Line Augmentation Station Lease Agreement between the City of Black Hawk, CO and the City of Arvada, CO (Parties). A number of Black Hawk’s water right decrees require them to make return flows to Ralston Creek. The City currently has no way to make those return flows except through a lease of wastewater effluent with the City of Westminster at an annual cost of approximately $1,800. The City of Arvada owns an augmentation station on the Farmer High Line Canal (FHL) that returns water to Ralston Creek which Black Hawk will use to make their return flows. The City of Black Hawk owns an augmentation station on the Church Ditch that returns water to Clear Creek which Arvada will use to make their return flows. The Lease Agreement allows both Cities to use the other’s augmentation stations for return flows as required by each Party’s decrees. There is no cost associated with this Agreement and will eliminate the need to lease water from Westminster. Black Hawk City Council approved Ordinance 2020-10 unanimously.

Black Hawk City Council also approved Council Bill 11 which is an Ordinance approving the Water Storage Agreement with the City of Golden. The City of Golden is required to deliver 100 acre feet of water to the City of Black Hawk each year. This water is typically provided from the Vidler Tunnel, which is trans-basin water that can be used to extinction without return flow requirements. In some years, the City of Black Hawk takes delivery of the Vidler water into Green Lake or Georgetown Lake. Because of the wet spring, enough storage space in these reservoirs is not available. As in past years, the City of Golden has agreed to store portions of Black Hawk’s Vidler water in Guanella Reservoir until the City can exchange it to Green Lake or Georgetown Lake. The cost of the storage is 50% of the water put into Guanella Reservoir. For example, if we store 50 acre feet in Guanella, we keep 25 acre feet and Golden gets 25 acre feet. There is no monetary cost to the City. The alternative is to let the water flow downstream and make no use of it. This agreement has been in effect since 2015 and needs to be renewed for 2020.

Resolution 36-2020 is a Resolution approving the Fabrication of the Green Lake Intake Structure with Elgin Separations Solutions. Green Lake is jointly owned by The City of Black Hawk and Clear Creek County in which the City’s share of the reservoir storage is 63% and the County’s share is 37%. The inflow pipeline was replaced over six phases from 2010 through 2016. The Intake project is the last portion of infrastructure that diverts water from Leavenworth Creek to the Lake. The Intake Structure is a long lead item that requires fabrication. The installation of the Intake Structure will be bid separately in June after the Vidler water delivery. Staff will bring that contract to City Council for approval at that time. Black Hawk will administer the contracts. Clear Creek County will reimburse the City for their share of the project. For this portion of the project, the City’s share will be $25,877 and the County’s share will be $15,222. Therefore, staff recommends awarding the fabrication to Elgin Separation Solutions. Black Hawk City Council approved Resolution 36-2020 unanimously.

Mayor Spellman commented on Central City’s article in the previous week’s edition of the Weekly Register-Call concerning the Lake Gulch Whiskey Resort project. “I read with amusement in the April 9th Weekly Register-Call, Central City Mayor Fey’s comments about the Lake Gulch Whiskey Resort at the April 7th Central City Council meeting. The Mayor’s declaration that ‘there is not a member of Central City Council or Staff that is opposed to the Tincup Whiskey development’ is a disingenuous utterance at best. His Honor’s declaration would foreshadow the disinformation campaign Central City was about to embark on the following day.”

Spellman continued, “On April 8th, Central City sent out a Press Release, which was nonsensical, disingenuous, and above all chocked-full of deception and disinformation. All rubbish in a feeble effort to bolster their senseless lawsuit against Black Hawk and Proximo Spirits, LLC. I will not address the 1999 Growth IGA as that is now a matter for the courts to decide. Sufficing to say, the Gilpin County Commissioners have consented to the annexation of the Lake Gulch Whiskey Resort, and that is all that is required under the 1999 Growth IGA. The City of Central’s consent is not required under the document.”

Continuing on, the Mayor stated, “As for the Southern Access, or the Central City Parkway, or the Casino Parkway – it is hard to keep up with whatever Central is calling the finical albatross they have saddled their City with for many years to come. It is unequivocally clear Central is attempting to force Black Hawk and Proximo to pay for a road we neither need nor want the use of. Central City is suffering from Delusions of Parkway Grandeur or Parkway Derangement.”

His Honor continues, “Black Hawk recently filed an open records request with Central asking what involvement the bondholders for the Parkway had in the lawsuit. The document we received from Central had more text redacted – blacked out – than there is readable text. It is evident that the greedy bondholders have joined with Central and want in on the extortion racket as well. Black Hawk shall expose the blatant deception and double standard Central is applying to what they term ‘Benefited Properties’ as it relates to actual impacts versus contrived impacts to their Parkway.

It is transparent that the City of Central is suing Black Hawk and Proximo to extort financial gain, which they are not entitled to nor deserving of. I would say the lawsuit is a cheap trick to extort money, but it is not cheap for the residents and businesses of Central. Central may be paying their attorneys a combined hourly rate of $1,000 or more. Black Hawk filed an open records request for the fee schedule of their outside legal counsel. It should come as no surprise, what Central responded with is a document in which more text is redacted – blacked out – than there is readable text. What are you concealing Central City? Perhaps this why you refuse to waive your casino’s device fees during this unprecedented economic calamity they are struggling through at this time.”

Spellman finished up with, “The City of Black Hawk prefers not to negotiate with extortionists. Perhaps it is high time for the City of Central to come clean and let their residents and all of Gilpin County know that the Lake Gulch Whiskey Resort was your development opportunity before it was Black Hawks. Central could not negotiate and close the deal with Proximo. The Lake Gulch Whiskey Resort was Central’s to lose and lose it they did. Is it possible greed got in the way of Central being the home of Tincup Whiskey? Do not use your revisionist history Central, as you will only get caught in yet another lie.”

Black Hawk City Council moved to adjourn into Executive Session per CRS 24-6-402(4)(b) to confer with an attorney for the local public body for the purposes of receiving legal advice on specific legal questions.

The next Black Hawk City Council regular virtual meeting will be held May 13, 2020 at 3:00 pm. For more information go to www.cityofblackhawk.org.

END_OF_DOCUMENT_TOKEN_TO_BE_REPLACED

Benefitting the county, schools, and much more By Don Ireland   This year marks the 30th anniversary of casinos opening in the former little mining towns of Black Hawk, Central City and Cripple Creek, Colorado. In those early years, smoking was allowed inside ... END_OF_DOCUMENT_TOKEN_TO_BE_REPLACED