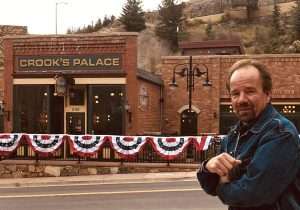 Taking Shape to be User-Friendly

The Gregory Street thoroughfare has been in the state of flux for 158 years. It is a primary artery joining two incredible and historic cities, Black Hawk and Central City. According to Black Hawk’s Mayor David Spellman, the Gregory Street “HARD” District is right on schedule. HARD was coined by Spellman and the Black Hawk City Council. It stands for “History Appreciation Recreation Destination.” The future distilleries moving to the city like the phrase because HARD refers to their industry. The Mayor likes it because it ties in with the vision he has embraced for several years – that Black Hawk become a friendlier, year-round resort destination.

“Gaming is still our priority, but we want visitors to have other activity options while they stay for 3-4 days.”  The current 1,000 hotel rooms will grow to 1,500 soon when the Monarch Casino Hotel completes their addition. Spellman foresees this number could double to 3,000 in the future. These guests, many of them out-of-staters, will have more shopping, sight-seeing and events to participate in.

Black Hawk has taken a bold move to improve its city. While Spellman’s vision has not changed, some of the details have improved. They will have four main areas:

–The Parking Garage, which will have three different levels with no ramps due to the natural slopes, joined with a distillery building west of Crooks Palace.

–The “Livery Lot” across from Crook’s, as it was known 150 years ago, will be another building with small retail shops within.

–West of Church Street  will be a third building for a micro-brewery, taste rooms and restaurants.

–An open plaza and gathering area for outdoor events, a “change which will be a big plus” according to the mayor. There will also be an elevated walkway for pedestrians and a walking bridge over Gregory Street. The whole street, all 1/3 mile, will be a kind of a “pedestrian plaza.”

The street walls and infrastructure are mostly completed. The remainder of the building and renovation should not impact traffic as much as this past major construction. After the street work is complete, they will begin renovating the quaint existing buildings. Black Hawk owns all the buildings on Gregory except for the Evangelical Free Church and two other buildings. These “Victorians” will be completely enhanced historically on the outside, but the insides will look much different to accommodate the public. The parking garage will be a major undertaking and should be completed by June, 2018. Some of the longevity plans for the new buildings could take up to five or ten years with possible changes as needed.

One concept that Mayor Spellman is excited about is accessing the historic Bobtail Mine. He is hoping to collaborate with the School of Mines in Golden to create a way for the public to explore deep inside the mountain, thus furthering the education of mining. He also has visions of creating an outdoor exhibit of large scale items such as “stamp mills, firehose carts, and antique fire trucks.” He hopes these items will be part of a year-round exhibit that could be encased in glass. The Lace House and Mountain City structures will also be incorporated together into this beautiful renovation as important historic interests.

The smaller retail space he hopes will attract Colorado-made products. While it is too soon to say which shops will come to Black Hawk, the City has received several inquiries from businesses that wish to be a part of this extraordinary  project.

Black Hawk has been forward thinking in meeting the growing needs in Colorado. They nicknamed the area from the Monarch Casino to Church Street as the GOLD (Gaming, Outstanding Lodging and Dining) district.   Mayor Spellman is proud of the hard work his city is doing to stay abreast of the needs of its residents and guests. He sees the renovation of Gregory Street as curating and celebrating the accrued history of this fine city.

END_OF_DOCUMENT_TOKEN_TO_BE_REPLACED

Benefitting the county, schools, and much more By Don Ireland   This year marks the 30th anniversary of casinos opening in the former little mining towns of Black Hawk, Central City and Cripple Creek, Colorado. In those early years, smoking was allowed inside ... END_OF_DOCUMENT_TOKEN_TO_BE_REPLACED

Benefitting the county, schools, and much more By Don Ireland   This year marks the 30th anniversary of casinos opening in the former little mining towns of Black Hawk, Central City and Cripple Creek, Colorado. In those early years, smoking was allowed inside ... END_OF_DOCUMENT_TOKEN_TO_BE_REPLACED