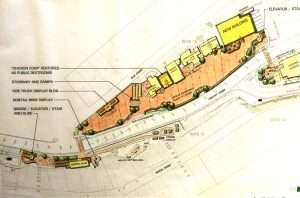 Wednesday, May 9, 2018 the City of Black Hawk City Council (BHC) met at 211 Church Street, in the upstairs chambers in Black Hawk, CO. A work session began at 2 pm where architectural landscape designer Mary Hart of Breckenridge proposed solutions for facilitating the next steps in a master plan for Gregory Street.  The regular City Council meeting followed immediately, at 3 pm.

Gregory Street connects Black Hawk to Central City, a mile apart from each other in Gilpin County. The original path through Gregory’s Diggings, later known as Mountain City, is where John H Gregory first found gold in 1859. So we now call it Gregory Street. Two miles west of Gregory’s Diggings, Nevadaville grew with many more mines. Central City was established as the county seat being a central point between the two boom towns. Steam trains built lines to carry the precious cargo dug from the mountains from the richest mile in the US to markets. This is some of the gold that helped fund recovery of the Civil War years. The Colorado Gold Rush brought many other prospectors and businesses to support the miners. Black Hawk was known as the “City of Mills” attracting assay offices, boiler makers, lumber yards and many other services.

By 1870 an improved process to smelter the gold improved cash flow in the area. Sadly, by 1920’s the area was declining from depleting the areas mineral resources, the cost of extracting the gold, and other interests. By 1932 reopening the Central City’s Opera House drew many culturally supporting folks back to these deserted parts. The 1950’s -70’s again attracted the perpetual prospector, who used any means possible to gain finances in the rugged rural populations with lots of abandoned equipment, properties and limited law enforcement services. In 1991 limited stakes gaming was permitted in Black Hawk, Central City, and Cripple Creek to draw crowds back to the historic area.

Black Hawk and Central City have been recognized as historic districts, and revenue from gaming is eventually funneled back to help restore Colorado historic districts. The City of Black Hawk City Council has committed to a Master Plan for Mountain City’s Gregory Street, now included in the Black Hawk city limits. The Master Plan for Gregory Street has the long term goal of preserving historical buildings and creating a charming historic oasis in the 21st Century. Redirecting the vehicle traffic on Gregory Street allows for a pedestrian plaza in a setting similar to what existed during the mining days. Short-term projects can be seen by many changes recently. Now there are retaining walls along the Bobtail Mine area and homes preserved. Some older non-historical buildings have been removed while some more historically accurate remain. Newer constructions like the Crook’s Palace and the Red Dolly Casino maintain historical integrity.

This past year the Gregory Street Project has seen the completion of many infrastructure improvements – the road straightened with a slight curve, freshly paved with sidewalks, pedestrian crosswalks, curbs, lighting and retaining walls along the approximately 500 foot section between High Street and Church Street with many road improvements. Currently, the St. Charles Carriage House, with three parking levels is under construction to provide parking for around a hundred cars.

May 9’s Council work session was to decide what the next step was in the Master Plan. The main goal was to create a pedestrian plaza with historical homes, so visions of the old railroad train truss over the road and new business construction recreating the images of the historic mining community would be a welcoming area for visitors. The incline of the original historic section of Gregory Street with the current retaining walls has an 8 ½ percent grade. To be accessible by guidelines with American Disability Act, the slope must be less than 5%.

Mary Hart found this change in the amount of slope to be one of the most challenging landscape architectural projects for which she has made recommendations. Some complications included the previously completed retaining wall work that perpetuates greater slope than desired. Other methods to access the area were considered. After much discussion viewing her recommendations illustrated with diagrams, a decision was made by Council. In keeping with the long term Master Plan, the next project will be to elevate the two historical homes remaining in the project area above their current foundations by a number of feet so they would comply with less of a slope on the plaza area across from them.

The bell ringer to officially open the City of Black Hawk City Council Meeting was Mark Schaller, Interim Fire Chief/ Emergency Manager. Mark has stepped in to cover this position with the retirement this April of Fire Chief Donald Taylor.

Item 8d was added to the agenda to approve changes for the City Hall Façade Restoration. There were no conflicts of interest, or public comments. The April 25, 2018 minutes were approved.

Public Hearings began with Council Bill 8. Water Resources Senior Engineer Jim Ford spoke of the existing agreement with the Historical Society. Black Hawk has constructed an augmentation station along Church Gulch. Over a year’s discussion about the diversion of water licensed to Black Hawk has resulted in this lease agreement between the City of Black Hawk and the City of Northglenn. Apparently both Northglenn and Arvada are expected to construct their own augmentation stations. Water that Black Hawk is not using is to be given to Northglenn in this agreement, although they are actually giving this portion of water to Arvada. There appeared to be lots of water trading. The Council approved the lease.

Community Planning and Development Director Cynthia Linker explained Action Item 8a, Resolution 34-2018, requesting a change in the fee schedule for some construction permits. Changes have been recommended from contractors confused by some of the fees that seemed to duplicate in areas. Some fees have been changed from incremental to simpler stages. There were less than 30 lines in the fee schedule that were recommended to be changed. The motion passed unanimously.

Administrative Services Director Melissa Greiner requested Resolution 35-2018. Colorado Open Meeting Law requires the posting of meeting times and locations of City Council. This has been posted on historical site City Hall located at 201 Selak Street. Currently, there is protective covering over the brick building during renovations to the exterior façade of the Black Hawk City Hall. This resolution states that the posting of meetings will be made in the US Post Office on Hwy 119 in the City of Black Hawk. The motion passed unanimously.

Finance Director Lance Hillis presented Resolution 36-2018, requesting approval to revise the purchasing policy for the City of Black Hawk. The current Purchasing Policy was provided with highlighting indicating the only change being requested. Competitive Bids are currently required on purchases considered above $10,000. The recommended change was to only request competitive bids over $20,000. The motion passed unanimously.

Public Works director Thomas Isbester requested Change Order No. 1 in the amount of $176,600 for the repainting of the entire stone faces, the reconstruction of the chimney on the south face, and sealing the entire stone faces of the City Hall building. No amount had been predicted until more detailed investigations could begin, hoping for less intensive work on the project to reinforce the mortar of the building bid by Walker Restoration Consultant. Walker provided extremely clear detailed intentions notating the areas of concern they had seen in the exterior of the building. They also followed all of the City’s requirements in the bid process. On April 25 the Council approved their proposal to restore the exterior façade of the City Hall.

A 1910 photograph of Black Hawk’s City Hall clearly shows the train truss possibly touching the brick building. Heavily loaded trains could have easily brought quick deterioration to the mortar of the bricks. The building has been designated as a historical site, so is eligible for funding to restore and secure this building. With the City Hall covered to keep it from exposure during work, the mortar beyond previous preservation efforts was found to be less than ¾ of an inch deep. The mortar deeper than that was nothing but sand, so completely unstable for holding up the building for any length of time.

The motion to approve the amount needed to restore and preserve the building long into the future was approved unanimously.

The meeting was adjourned at 3:10 pm.

The next City of Black Hawk City Council meeting will be Wednesday, May 23, at 3 pm. Meetings are held in the Council Chambers of 211 Church Street in Black Hawk, Colorado.

END_OF_DOCUMENT_TOKEN_TO_BE_REPLACED

Where the dead get to tell their story By Jaclyn Schrock On Saturday, August 21, the Gilpin Historical Society held their annual Cemetery Crawl. Tickets allowed the shuttle of hundreds of guests from the Teller House parking lot to the Cemetery. Depending on v... END_OF_DOCUMENT_TOKEN_TO_BE_REPLACED

Benefitting the county, schools, and much more By Don Ireland   This year marks the 30th anniversary of casinos opening in the former little mining towns of Black Hawk, Central City and Cripple Creek, Colorado. In those early years, smoking was allowed inside ... END_OF_DOCUMENT_TOKEN_TO_BE_REPLACED