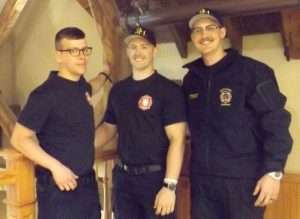 Black Hawk City Council approved the minutes from the May 15, 2019 regular meeting with no corrections or amendments.

New Employee Firefighter Marc Norman: Marc was born and raised in Colorado, is married to Katelyn and has two young daughters. Marc has been a volunteer firefighter with Clear Creek Fire Authority. He has worked as an EMT in the hospital setting and after a few years moved to a position as an OB/NICU tech. He is very proud to have delivered his two children, and assisted during many other deliveries. He recently took up golfing again and is looking forward to the next City golf tournament. He enjoys photography, camping, climbing, family time, shooting, and work.

New Employee Firefighter Jonathan Zoetewey: Jon is incredibly excited for this opportunity to join the City of Black Hawk Fire Department as a firefighter. He is originally from Canada, but has spent most of his life in Colorado, raised in Denver. He is the youngest of four and the first of his family to go into a career in emergency services. He enjoys filling his days with meaningful work, which led him to this career. He has been in public safety for over six years, working in high-volume systems as both an EMT and volunteer firefighter. Jon has practiced Martial Arts his entire life and now teaches self-defense and community safety skills to adults with developmental disabilities. He also enjoys woodworking, a craft he learned from his dad, and spending time with his three rescue dogs

New Employee Firefighter Ryan Jones: Ryan has been a volunteer firefighter with both Eaton and Windsor Fire and has been working on an ambulance in a 9-1-1 system in Loveland. He has a background in construction and building houses. He enjoys time volunteering with the Boy Scouts and running scouting camps in Utah. In his spare time, he also enjoys snowboarding, skiing, rock climbing, mountain biking, rafting, and grew up playing baseball and football. He studied microbiology at the University of Utah. He is happy to be new firefighter at the City of Black Hawk and is looking forward to learning a lot in this new position.

Black Hawk City Council approved the Minutes from the May 8, 2019 Regular meeting.

Black Hawk City Council approved Resolution 27-2019 which is a Resolution Approving the Agreement of Lease between the City of Black Hawk as Lessor and Ed & Shirley, Inc. as Lessee for the Crooks parking lot Property Located at 200 Gregory Street, Black Hawk, Colorado.

Administrative Services Director Melissa Greiner presented a Resolution Approving the Proposal from CIGNA for 2019-2021 Ancillary Coverage. The coverage will insure Black Hawk City employees for Basic/Voluntary Life, AD&D, Short term disability and Long term disability. CIGNA has offered to renew the ancillary lines of coverage for the next two years without an increase in premiums. Staff budgeted for a 10% increase at renewal for plan year July 1, 2019 – June 30, 2021.

Resolution 29-2019 is a Resolution Approving the Purchase of a Bobcat E85 Compact Excavator from Bobcat of the Rockies in an amount Not To Exceed $73,090. A replacement compact excavator was budgeted for in this years’ capital equipment replacement plan. The 2000 Gehl unit has outlived its useful life and has as of late spent as much time in the repair shop as it has working. Staff received quotes from three vendors:

Black Hawk City Council approved a Resolution Awarding the Bid and Approving the Construction Manager/ General Contractor (CMGC) Contract between the City of Black Hawk and Taylor Kohrs, LLC in an Amount Not To Exceed $5,650 for Preconstruction Services Pertaining to the Hidden Treasure Trailhead Project. The City desires to develop a parking lot and trailhead for the Maryland Mountain open space area. Work will include a parking lot, pedestrian bridge over Highway 119, restroom facilities, and the relocation of a hawk sculpture. The City has elected to utilize the CMGC method to get a contractor on board early to assist with the final design elements, explore any value engineering and constructability concepts and get long lead items ordered early in an effort to complete this project before the end of the year. The result of the preconstruction services will be a GMP guaranteed maximum price for the work and staff will come back to Council at that point for authorization and amendment to this agreement. Staff publicly advertised for the request for qualifications (RFQ) and received proposals from three qualified contractors. Taylor Kohrs provided the lowest proposed costs and fees. References were checked which resulted in positive feedback. Staff recommends award to Taylor Kohrs LLC.

Black Hawk Aldermen also approved Resolution 31-2019 which is Resolution Awarding the Bid and Approving the Contract between the City of Black Hawk and Grapes & Sons Excavating in an Amount Not To Exceed $43,300 for Construction of the Maryland Mountain Main Tramway Grading Project. Under a previous contract, Grapes & Sons Excavating has completed removing trees and installing a culvert on the Maryland Mountain Main Tramway between Castle Rock and the future Hidden Treasure pedestrian bridge. The next phase of the Maryland Mountain project is to bring this 1.5- mile section of the Main Tramway to final grade. Grapes & Sons Excavating would grade the trail with an outward slope to prevent standing water, fill in low spots, stabilize the outer edge of the trail where necessary, and add rocks to potential washout areas to mitigate erosion.

City Manager Stephen Cole reminded that The Daughter of the American Revolution will hold a ceremony at the Dory Hill Cemetery Friday May 25, 2019 at 11 a.m. Mr. Cole also wanted to remind everyone that the Black Hawk Clean-up day is scheduled for Thursday, May 23rd. (Note that due to the snowfall, this clean-up day was cancelled and a new date will be announced soon.)

END_OF_DOCUMENT_TOKEN_TO_BE_REPLACED

Benefitting the county, schools, and much more By Don Ireland   This year marks the 30th anniversary of casinos opening in the former little mining towns of Black Hawk, Central City and Cripple Creek, Colorado. In those early years, smoking was allowed inside ... END_OF_DOCUMENT_TOKEN_TO_BE_REPLACED