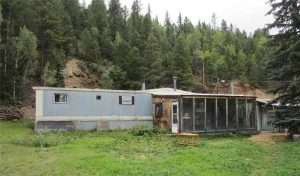 Kylie Vigil began her career with the Black Hawk Police Department as a Communication Officer on April 22, 2019. She was born in Denver, grew up in Lakewood and is currently on the move back to Green Mountain where she attended high school. Kylie received a Bachelor’s Degree in Spanish and Biology at the University of Colorado. Her original plan was to go Pre-Med, but, over time discovered her passion for Criminal Justice and Law Enforcement. Prior to her position with the City of Black Hawk she was a Correctional Officer at Denver Women’s Correctional Facility where she says she certainly had her work cut out for her. Kylie is grateful for her new opportunity and hopes to continue learning and growing as a law enforcement professional. On her time off Kylie enjoys hiking and social gatherings with loved ones. Checked off on her bucket list was riding a floatplane over Prince of Wales Island in Alaska, and zip lining through the rainforests of Costa Rica. In the future she wants to sky dive in parts of the world she hasn’t explored yet.

Officer Kevin Sagar started as a Police Officer with the City of Black in June of 2019. He works patrol from the 3 p.m. to 1 a.m. shift. He has never worked in a mountain community and is enjoying the view and the atmosphere. The Police Department has a good group of employees that he is proud to work with. Officer Sagar was born in Washington DC. His family moved to Colorado when he was four years old. He graduated from Littleton High School and attended CSU and Red Rocks Community College. Kevin met his wife in jail (no she was not an inmate) and has been happily married for twenty years. He and his wife live in the metro area with their two sons. Officer Sagar has been in Law Enforcement for 25 years. His career started at the Jefferson County Sheriff’s Office as a Reserve Deputy Sheriff and Detention Specialist in the jail. He then moved over to the Westminster Police Department as an officer where he remained for 11 years. Looking for a change, he then was hired on with the First Judicial District Attorney’s Office for the Jefferson and Gilpin Counties as a Criminal Investigator. After 10 years with the DA’s office, it was time to make a return to what he had missed most about law enforcement; wearing a uniform and helping the community. Some of his favorite activities and hobbies are spending time with his family, going to all his kid’s activities, shooting, off-roading and anything and everything to do with aviation, golf, and travel.

Black Hawk City Council also approved a Bill for an Ordinance Amending Article XVIII of Chapter 6 of the Black Hawk Municipal Code Regarding Retail Marijuana Establishments as presented by Corey Hoffmann. The amendment will change the quantity of  one (1) ounce of retail marijuana or its equivalent in retail marijuana concentrate or retail marijuana products to persons twenty-one (21) years of age or older during a single sales transaction. Whereas the previous version stated that one ounce may be sold to Colorado residents only. The Green Solutions Group representative Abby Borchers spoke in support of CB 16 prior to the approval of the amendment.

City Clerk/ Administrative Services Director Melissa Greiner presented Council Bill 17 which is an Ordinance Setting Ballot Questions for a November 5, 2019 Special Election to be Conducted as an Independent Polling Place Election pursuant to the Colorado Municipal Election Code. The City desires to conduct a special election on November 5, 2019, so that City voters may consider two ballot questions. Ballot Question No. 1 is requesting an increase of up to $200 to the General Device Tax to fund the rehabilitation of existing homes and to fund resort destination development opportunities throughout the City. Ballot Question No. 2 is seeking approval for the City of Black Hawk to allow Sports Betting within the City consistent with the provisions of C.R.S. § 44-30-1505(5)(d) of House Bill 19- 1327, provided that Sports Betting is also concurrently authorized at the Statewide Election submitted pursuant to C.R.S. § 44-30-1514. Black Hawk City Council approved CB 17 unanimously.

Planning and Development Administrator Cindy Linker presented Resolution 51-2019 which is a Resolution Approving the Agreement for the Complete Demolition of 500 Chase Street and 531 Chase Street with Grapes & Sons Excavation in a Total Amount Not to Exceed $54,400. The City originally requested Weecycle Environmental to manage the demolition project and secure a demolition contractor. Bids were received from three contractors: 1) Excel Environmental, Inc. – $83,699, 2) Mustard Seed Construction – $86,080, and 3) Earth Services & Abatement – $204,657. After reviewing the bids, the City solicited a separate proposal from Grapes & Sons Excavation – $54,400. Because the Weecycle bids were on the higher end of the spectrum, the City has elected to bring the Grapes & Sons Excavating contract before City Council for consideration. Since the City is not recommending a Weecycle bidder, Weecycle will not perform the services of Project Manager as originally recommended. City staff will instead assume that responsibility. Since the Grapes & Sons Excavating proposal offers substantial savings, after Black Aldermen approved this Resolution, the Notice to Proceed will be issued August 19, 2019.

Black Hawk City Council approved Resolution 52-2019 which is a Resolution Amending Resolution 100-2014 to Reflect the Placement of a Granite Monument as the Veteran’s Memorial Plaque at Dory Hill Cemetery as presented by Black Hawk City Clerk/ Administrative Services Director Melissa Greiner. As experienced rock masons are scarce in the Denver metro area after the retirement of the City’s primary contractor, and to avoid further delays in erecting the approved monument, City staff considered alternative monument types. The best fit for the native landscape of Dory Hill Cemetery was a natural stone granite monument with a polished face for the inscription. The Mountain Rendezvous Chapter of the Daughters of the American Revolution was pleased with the alternate choice, and the ladies hosted a dedication ceremony in honor of Memorial Day on May 24, 2019.

Black Hawk City Clerk/ Administrative Services Director Melissa Greiner also presented the Resolution Setting Forth the Fees that May Be Charged for Open Records Requests Under the Colorado Open Records Act, C.R.S. § 24-72- 200.1, et seq. Pursuant to Section 24-72-205(6)(b), C.R.S., the maximum hourly fee for the research and retrieval of public documents in response to a Colorado Open Records Act request will increase from $30 to $33.58 as of July 1, 2019.

END_OF_DOCUMENT_TOKEN_TO_BE_REPLACED

Benefitting the county, schools, and much more By Don Ireland   This year marks the 30th anniversary of casinos opening in the former little mining towns of Black Hawk, Central City and Cripple Creek, Colorado. In those early years, smoking was allowed inside ... END_OF_DOCUMENT_TOKEN_TO_BE_REPLACED

Benefitting the county, schools, and much more By Don Ireland   This year marks the 30th anniversary of casinos opening in the former little mining towns of Black Hawk, Central City and Cripple Creek, Colorado. In those early years, smoking was allowed inside ... END_OF_DOCUMENT_TOKEN_TO_BE_REPLACED