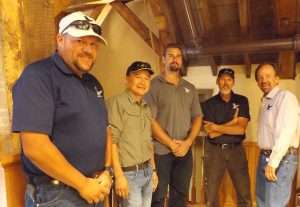 Garrett Flesh began working for the City on February 11th. So far, his experience here has been an adventure, the views are amazing and it’s much better than being indoors all day. Mr. Flesh has been married 2.5 years to his wife Amber and has a son named Trevor. In his free time he likes going to Rockies games with friends, traveling, and assembling complex Legos!

Eric Groves began working for the City on January 8th. His experience so far has been very good; everyone he has met and worked with has been friendly and helpful. Mr. Groves and his wife live in the area and in their free time they like to going to the gym, hiking, and snowshoeing.

Henry Ho began working for the City on January 9th. According to Mr. Ho, “Working here has been a good learning experience and I am enjoying the scenery a great deal. My bride and I have been married 23 years and we have four wonderful children.” He has lived in Colorado for 29 years and enjoys fishing, hiking, boating, camping, gardening, and snowboarding.

Robert Shomler started working for the City on June 10th. So far his experience has been great, and he’s enjoying learning all the aspects of the job. Mr. Shomler and his wife and moved here from Michigan about a year ago and are currently building a house on Dory Hill. Before coming to the City he worked as an auto technician at a Toyota dealership.

Black Hawk City Council approved Resolution 56-2019, which is a Resolution awarding the contract and authorizing the Mayor to execute the agreement for the removal of the Christmas decorations installed for the 2017/2018 season as well as the manufacture, refurbishment, installation, and maintenance of the decorations for the 2018/2019 season. This portion of the work is $25,297. Staff will begin to prepare program options for the 2018/2019 install based on feedback from City Council. About half of the garlands will need to be replaced due to weather exposure which accounts for a majority of the increase in budget for the year.

The City’s benefits broker, IMA of Colorado approached CIGNA to inquire about updating the weekly benefit for Short Term Disability (STD) and the monthly benefit for Long Term Disability (LTD). The intent was to increase the maximum benefit for both STD and LTD for a more equitable benefit distributions for higher paid staff. CIGNA returned an offer to update coverages for their STD and LTD lines under the current contract previously approved on May 22, 2019 for July 1, 2019 through June 30, 2021. The updated benefits would begin September 1, 2019 and have a 22-month rate guarantee. Based on current payroll, the estimated annual increase in premium will be $767 for Short-term and $571 for Long-term for a total annual increase of $1,338. Staff budgeted for a 10% increase at renewal for plan year July 1, 2019 – June 30, 2021. CIGNA returned a rate pass on the 2019-2021 renewal without increase in benefits in the original proposal approved in May. Black Hawk City Aldermen approved Resolution 57-2019 unanimously.

City Attorney Corey Hoffmann reported an update on the opioid litigation that the City is participating in. Mr. Hoffmann informed the Aldermen that progress in that case is moving forward and soon all the municipalities that filed in that case will receive a letter about the status of this litigation. The City will find out more information in the near future According to Hoffmann, “Things are definitely heating up in this case.”

The next Black Hawk City Council regular meeting will be conducted September 11, 2019 at 3:00 p.m. at 211 Church Street, Black Hawk, Colorado.

END_OF_DOCUMENT_TOKEN_TO_BE_REPLACED

Where the dead get to tell their story By Jaclyn Schrock On Saturday, August 21, the Gilpin Historical Society held their annual Cemetery Crawl. Tickets allowed the shuttle of hundreds of guests from the Teller House parking lot to the Cemetery. Depending on v... END_OF_DOCUMENT_TOKEN_TO_BE_REPLACED

Benefitting the county, schools, and much more By Don Ireland   This year marks the 30th anniversary of casinos opening in the former little mining towns of Black Hawk, Central City and Cripple Creek, Colorado. In those early years, smoking was allowed inside ... END_OF_DOCUMENT_TOKEN_TO_BE_REPLACED