Mayor Spellman led the meeting in the recitation of the Pledge of Allegiance and, with a heavy heart, again asked everyone to continue to stand for a Moment of Respect, this time for his brother Mark Spellman, who passed away a week ago. Mark, at the age of 18 in 1976, became the Fire Chief of the Black Hawk Volunteer Fire Department and served for 15 years. Mayor Spellman said he truly believes that Mark is the one who sustained the Volunteer Fire Department for all those years, because there weren’t a lot of resources available in Black Hawk at that time that could be dedicated to the Fire Department. Mark had convinced numerous City Councils that they should continue to invest and upgrade the Department.  He said it was Mark’s passion, enthusiasm and dedication to the fire service that made the Volunteer Fire Department what it was.

Mark was the youngest Fire Chief in the history of the City of Black Hawk and, more than likely, the State of Colorado. He also had a 30 year career with the Westminster Fire Department and had retired in 2006 due to health issues. Mayor Spellman said Mark truly loved the Fire Service, and next week at the memorial service, the Black Hawk Fire Department is going to participate with the Honor Guard, and the antique fire truck will be there. He thanked Chief Taylor for working all this out with the Westminster Fire Department and greatly appreciates this gesture.

Mayor Spellman stated that Action item “B” has being struck from the agenda. Item “B” (Resolution 60-2017) is a resolution approving the selection of Election Judges for the Special Election to be held on November 7, 2017.

City Attorney Hoffmann asked Council to declare any Conflicts of Interest on any issue appearing on the agenda this afternoon other than those previous disclosures and conflicts that have already been disclosed and are on file with the City Clerk and Secretary of State. There were no conflicts noted from City Council. City Attorney Hoffmann asked the audience if there were any objections to any member of Council voting on any issue on the agenda this afternoon. The audience had no objections.

Black Hawk City Council approved the meeting minutes from the September 13, 2017 regular meeting with no changes

Black Hawk City Council unanimously approved a resolution for the purchase of VHF portable radios and accessories from QDS Communications, Inc. for the Fire, Police, and Public Works departments. Within the budget of the Fire Department and Public Works is the replacement of currently utilized VHF portable radios which have reached end of service life. The total purchase provides Fire with 25 radios and accessories, Police with 6 radios and accessories and Public Works with 10 radios and accessories. This replaces the current radios that have reached end of service life and allows them to be transferred to an emergency cache of radios for a large scale incident or disaster. While Fire and Public Works are replacing all radios, the additional Police radios will complete a multi-year replacement plan. All three departments will now have the same model radio for interoperability. Two vendors bid on the RFP which was sent to multiple vendors and one vendor provided two different model radios for the bidding process. QDS Communications, Inc. is an authorized Motorola vendor and currently provides support to our radio system infrastructure. They have a significant history of providing this service to the City of Black Hawk.

There was no City Manager or City Attorney Report, and no Executive Session. 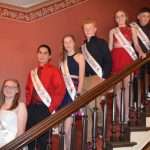