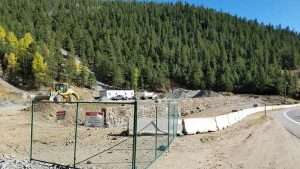 The most recent Black Hawk City Council regular meeting highlighted a fee schedule amendment, a re-classification of the City’s Planner and Development position, and water fees.

Black Hawk Water Resource Engineer and all around interesting guy Jim Ford rang the bell to announce the October 9, 2019 session that began promptly at 3:00 p.m. Mayor Spellman called the Black Hawk City Council to order followed by Roll Call, then led in the Pledge of Allegiance.

City Attorney Hoffmann asked Council to declare any Conflicts of Interest on any issue appearing on the agenda other that than those already disclosed and filed with the City Clerk and Secretary of State. There were no objections from the City Council or from the guests in the chambers.

Black Hawk City Council approved the minutes from the September 25, 2019 regular meeting with no corrections or amendments.

Black Hawk City Council approved Resolution 70-2019, which is a resolution amending the 2019 City of Black Hawk Fee Schedule as presented by Planning and Development Administrator Cindy Linker and Fire Chief Christopher Woolley. The fees affected are the Electrical Fees and Fire Department Fees.

Finance Director Lance Hillis presented Resolution 73-2019 that establishes Water Rates Pursuant to Section 13-23 of the Black Hawk Municipal Code. The City has left water rates untouched since June of 2009. Since that time the General Fund has transferred to the Water Fund over $11,500,000 to help cover the cost of capital projects that maintain and expand the water system. In an effort to create a true Water Enterprise Fund and to begin to repay the General Fund for the loans made over the past 10 years, a water rates increase is necessary. If approved, this Resolution would increase base rates, as well as volumetric rates, for all taps sizes by 10%, effective January 1, 2020. Black Hawk City Council approved Resolution 73-2019 unanimously.

City Manager Stephen Cole presented Black Hawk City Council with a copy of the 2020 annual budget. A work session is scheduled at 2:00 p.m. on October 23, 2019 and the official adoption on November 15, 2019.

City Attorney Corey Hoffmann recommended that Council make a motion to adjourn to Executive Session per C.R.S. 24-6-402 (4)(b) to confer with an attorney for the local public body for the purposes of receiving legal advice on specific legal questions and C.R.S. 24-6-402 (4)(c). Matters are required to be kept confidential by federal or state law or rules and regulations.

END_OF_DOCUMENT_TOKEN_TO_BE_REPLACED

Where the dead get to tell their story By Jaclyn Schrock On Saturday, August 21, the Gilpin Historical Society held their annual Cemetery Crawl. Tickets allowed the shuttle of hundreds of guests from the Teller House parking lot to the Cemetery. Depending on v... END_OF_DOCUMENT_TOKEN_TO_BE_REPLACED

Benefitting the county, schools, and much more By Don Ireland   This year marks the 30th anniversary of casinos opening in the former little mining towns of Black Hawk, Central City and Cripple Creek, Colorado. In those early years, smoking was allowed inside ... END_OF_DOCUMENT_TOKEN_TO_BE_REPLACED