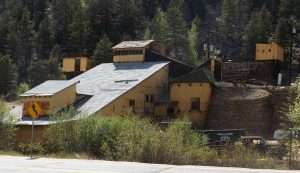 Resident Tom Feeney had a positive comment concerning the stunning floral arrangements scattered throughout the city.

Black Hawk City Council approved the minutes from the May 22, 2019 regular City Council meeting with no corrections.

Black Hawk City Council approved Resolution 34-2019 which consists of authorizing a Certificate of Architectural Compatibility for Exterior Improvements to the Property Located at 241 Dubois Street. Applicant, Derek Blake, has applied for a Certificate of Architectural Compatibility and is proposing the following exterior improvements to his residence located at 241 Dubois Street:

The house at 241 Dubois Street is constructed on a terrace above Dubois Street; the terrace is supported by a retaining wall. The work proposed in this application would affect the west side yard of the property. While this work is street-facing, proposed project elements would have limited visibility from the street level below. As demonstrated above in Section II(b), items contained in this application satisfactorily reflect the Design Standards.

Vince Harris from Baseline Engineering also presented Resolution 35 which is titled as a Resolution Conditionally Approving a Certificate of Architectural Compatibility to Allow the Performance of Roof Repair and Replacement and Limited Demolition of the Golden Gilpin Mill Property. On May 6, 2019, the City of Black Hawk received an application request for a Certificate of Architectural Compatibility (COAC) from Matt Collins, representing the George E. Otten, Jr. Trust, for roof repairs and limited demolition of a lean-to type shop addition at the Golden Gilpin Mill located at 7593 State Highway 119 in Black Hawk. According to the Gilpin County Assessor, the existing structure was built in 1932. The structure has not been included on the National Register of Historic Places, nor has it been designated by the City of Black Hawk as a Historic Landmark. It is also not within the National Historic District. The proposed demolition is limited to the shop area which was not part of the original construction. David Grimm, Larry James, and Mill manager Mike Meter all spoke in favor of the Resolution. Tom Feeney spoke somewhat in opposition of the Resolution siting traffic concerns on Hwy 119. Mayor Spellman assured Mr. Feeney that Colorado Department of Transportation (CDOT) and the City of Black Hawk will address any traffic concerns in the future as the mill ramps up operation. Black Hawk City Council approved Resolution 35-2019 unanimously.

Resolution 36-2019, is a Resolution Reappointing Two (2) Regular Members to the City of Black Hawk Historic Preservation Commission. Members of the Historic Preservation Commission shall be residents of the City of Black Hawk and shall have such qualifications as the City Council deems necessary and desirable in the best interest of the City. To the extent possible, the Commission shall be composed of both professional and lay members and shall be selected from fields of history, architecture, landscape architecture, architectural history, prehistoric or historic archaeology, planning or related disciplines such as the building trades, culture geography, cultural anthropology, real estate or law. Recognizing that professionals may not be available in some communities, this requirement can be waived if the local government makes a good faith effort to recruit professionals and demonstrates that it is capable of carrying out Commission responsibilities. The Commission shall consist of five (5) members appointed by the City Council. All members shall serve a four (4) year term unless a Commission member is filling an unexpired term, in which case the Commission member shall serve the remaining portion of the unexpired term. The City Council shall appoint a member to fill the unexpired term of the member whose place has become vacant. The Commission currently has two (2) commissioners with terms expiring August 1, 2019. The City of Black Hawk placed an advertisement in the Weekly Register-Call for the April 25, 2019 edition and the May 2, 2019 edition seeking residents to fill the upcoming vacancies on the Historic Preservation Commission. All interested candidates were instructed to submit a letter of interest including qualifications to the City of Black Hawk, Community Planning and Development Department, by May 13, 2019. Letters of Interest have been received from Curtis Linder and Larry Linker. Both are City of Black Hawk residents and currently serve on the Commission. Curtis Linder is the Vice Chairman and has served on the Commission since 2010. Larry Linker is a Commissioner and has served on the Commission since 2013. Both members are in good standing and Staff recommends their reappointment for another four (4) year term limit from August 1, 2019 to August 1, 2023. Black Hawk City Council voted to allow Mr. Linder and Mr. Linker to remain on the Black Hawk Historic Preservation Commission for another four years.

Planning and Development Administrator Cindy Linker presented Resolution 37-2019 which concerns Approving the Agreement to Remove and Dispose of Hazardous Materials from Property Located at 500 Chase Street with Weecycle Environmental Consulting in a Total Amount Not To Exceed $5,500. On May 31, 2018, Weecycle Environmental Consulting, Inc. submitted a Proposal for Services to Remove and Dispose of all the Hazardous Materials located at 500 Chase Street, prior to full demolition. The materials include but are not limited but not limited to four (4) 55-gallon drums of oil; miscellaneous batteries, numerous gas cans, refrigerants that include Acetylene, Argon, Oxygen, and twelve (12) Propane tanks, a variety of paint, lead car tire weights and numerous other miscellaneous items. Black Hawk City Council approved Resolution 37-2019 unanimously.

Black Hawk Finance Director Lance Hillis presented a Resolution Accepting City of Black Hawk 2018 Audit. Colorado State law requires that the financial statements of the City of Black Hawk be audited by an independent Certified Public Accountant. The City’s auditor, John Cutler & Associates, LLC has issued a clean or unqualified opinion. This means the Financial Statements present fairly, in all material respects, the financial position of the City. This is the best type of opinion an auditee may receive from an external auditor. Black Hawk Aldermen were pleased with the Audit results and accepted the Audit unanimously.

Black Hawk Alderman Approved a Local Liquor Licensing Authority Consideration of a Request for a New Hotel & Restaurant Liquor License for Isle of Capri Black Hawk, LLC dba Isle Casino Hotel Black Hawk at 401 Main Street to Set the Boundaries of the Neighborhood and to Set a Date for the Public Hearing. The Isle of Capri Black Hawk, LLC dba Isle Casino Hotel Black Hawk is requesting a Change of Class from their current Retail Gaming Tavern Liquor License to a Hotel and Restaurant Liquor License in order to furnish and deliver complimentary alcohol beverages in sealed containers for the convenience of its guests, as per C.R.S. §44-3-413(4)(a), and to potentially conduct room service. The City Clerk’s office received a Change of Class application (processed as a new application) from the Isle Casino on May 24, 2019. They will surrender their Retail Gaming Tavern License once they receive their new Hotel and Restaurant License. The application was deemed complete on June 3, 2019. It is under concurrent review with the State. As per the Black Hawk Municipal Code, Section 6-61(a) states “The City Clerk shall place on the agenda of a City Council meeting the request for a new liquor license. The meeting shall be held not less than four (4) days nor more than thirty (30) days after the City Clerk has received the application. The date the completed application is received by the City Clerk shall be deemed the date of filing of the application.” Section 6-61(b) states “The City Council shall set the boundaries of the neighborhood and shall set a date for public hearing. The public hearing shall be held not less than thirty (30) days from the date of the City Council meeting in which the application was presented.” The next Council meeting to fall within this requirement would be July 24, 2019. A public notice will be posted and published in a later edition of the Weekly Register-Call.

City Manager Stephen Cole reported an information item. Several weeks ago he, Mayor Spellman, and Public Works Director Tom Isbester, went around town and noted the conditions of some of the more dilapidated commercial buildings in the city. They established a need to get those buildings cleaned up to address any code or nuisance violations. The City has contracted with Baseline Engineering to inspect thirty nine commercial buildings to look for those violations and generate a report with photographs on those findings. Black Hawk will notify the owners of those buildings and has committed to work with those owners to rectify any issues that result from that report.

END_OF_DOCUMENT_TOKEN_TO_BE_REPLACED

Benefitting the county, schools, and much more By Don Ireland   This year marks the 30th anniversary of casinos opening in the former little mining towns of Black Hawk, Central City and Cripple Creek, Colorado. In those early years, smoking was allowed inside ... END_OF_DOCUMENT_TOKEN_TO_BE_REPLACED