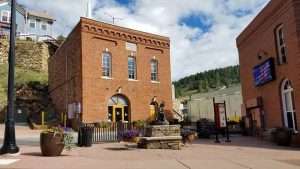 A November election agreement with the County, a Business Improvement District (BID) exclusion, and a Resolution accepting the 2019 Audit were the topics of discussion during the Regular online meeting of the Black Hawk City Council.

City Attorney Hoffmann asked Council to declare any Conflicts of Interest on any issue appearing on the agenda this afternoon other that than those already disclosed and filed with the City Clerk and Secretary of State. There were no objections from the City Council or from anyone online.

Black Hawk City Council authorized $1,500 for the purchase of new chimes along with the music. The present system is twenty-five years old and the supplier of the current chimes no longer services this particular model nor do they supply an update song selection. Mayor Spellman suggested that he would like to program the chimes to play the National Anthem, which is not available on the current system, every day as the first song of the day, at noon and the last song of the day.

Black Hawk City Council approved the meeting minutes from the May 13, 2020 Regular Meeting and the June 24, 2020 Special Meeting with no corrections or amendments.

Black Hawk City Attorney Corey Hoffmann presented the Intergovernmental Agreement (IGA) between the City of Black Hawk and Gilpin County to conduct a fully coordinated election with Gilpin County on November 3, 2020. Technically under state law, an election IGA is not due until October. During this upcoming election, Gilpin County is requiring the IGA to be finalized by July 24, 2020 for reasons unknown. The initial draft of the agreement received by Black Hawk from Gilpin County had some mistakes and areas that are inconsistent with the State’s uniform election code. Adoption of Ordinance 2020-17/ CB17 would allow the City Attorney’s Office to edit the draft agreement to align it with the State election code and return it to Gilpin County in a timely manner. Black Hawk City Council made a motion and approved Ordinance 2020-17/ CB17 unanimously.

Black Hawk City Council also approved Resolution 57-2020 which is a Resolution Accepting City of Black Hawk 2019 Comprehensive Audit financial report. Colorado State law requires that the financial statements of the City of Black Hawk be audited by an independent Certified Public Accountant. The City’s auditor, John Cutler & Associates, LLC has issued a clean or unqualified opinion. This means the Financial Statements present fairly, in all material respects, the financial position of the City. This is the best type of opinion an auditee may receive from an external auditor.

City Attorney Corey Hoffmann recommended that City Council recess into Executive Session per C.R.S.-24-6-402(4)(b) to confer with an attorney for the local public body for the purposes of receiving legal advice on specific legal questions and C.R.S. 24-6-402 (4)(e) determining positions relative to matters that may be subject to negotiations; developing strategy for negotiations; and instructing negotiators.

The next Black Hawk City Council regular virtual meeting will be held August 12, 2020 at 3:00 pm. For more information go to www.cityofblackhawk.org.

END_OF_DOCUMENT_TOKEN_TO_BE_REPLACED

Where the dead get to tell their story By Jaclyn Schrock On Saturday, August 21, the Gilpin Historical Society held their annual Cemetery Crawl. Tickets allowed the shuttle of hundreds of guests from the Teller House parking lot to the Cemetery. Depending on v... END_OF_DOCUMENT_TOKEN_TO_BE_REPLACED