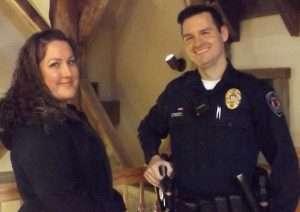 The Black Hawk City Council regular meeting on February 12, 2020 highlighted the adoption of the City’s Comprehensive Plan, a resolution approving the purchase of the Bates Lode and the PM Lode mining claims, and a professional services agreement fordesign services pertaining to the Lace House Rehabilitation Project.

New Black Hawk Police Officer Dustin Rust and Communications Officer Kellie Johnson rang the bell to announce the start of the session that began promptly at 3:00 pm. Mayor Spellman then called the Black Hawk City Council to order followed by Roll Call, then led in the Pledge of Allegiance followed by a brief moment of silence for Executive Administrative Assistant Julie Seitzinger.

Dustin Rust is a newcomer to Colorado after spending the last 20 years in law enforcement in Texas. In addition to his Master’s Degree in Law Enforcement Administration, he is a graduate of the FBI Command School with a Trilogy award, as well as the Law Enforcement Management Institute. Dustin also holds certifications as a Level 2 Firefighter, Emergency Medical Responder, Arson Investigator, SWAT operator, and General Instructor in Emergency Management Operations. Dustin has three children with his wife Laura, who is a former news anchor in Texas. According to Mr. Rust, “I look forward to using my experience working with the city and community to improve the quality of life for both citizens and visitors alike.”

Kellie Johnson is from Albuquerque, NM, but spent the last 13 years in Texas. She graduated from Eldorado High School in Albuquerque then continued her education at the University of New Mexico where she graduated with a degree in Political Science. After moving to Texas she joined the United States Army Reserves as a Health Inspector. She has had the privilege of deploying twice and attaching to the Australian Navy once. She is still currently in the Army Reserves in a reserve unit based out of Aurora, Colorado. While in Texas she continued her education and graduated with her Bachelors in Business Management. She worked as an Army civilian contractor at San Antonio Military Medical Center in the Uniformed Business Office. Kellie moved to Gilpin County January 2019 and one week after the move had a surprise blessing of her son coming two months early. Thanks to the help of the Gilpin County Ambulance and Flight for Life, both she and her beautiful son are thriving. Due to her experience during child birth she wanted to be of service to people, like those who were there for her. She is proud to be a part of the Black Hawk Police Department Communications Team!

Black Hawk City Council approved the minutes from the January 22, 2020 regular meeting with no corrections or amendments.

Black Hawk City Council approved Resolution 8-2020 which is a Resolution Adopting the Comprehensive Plan of the City of Black Hawk, dated February 10, 2020. Per Colorado Revised Statutes C.R.S. § 31-23-206 requires that the City of Black Hawk adopt a comprehensive plan, also known as a master plan, as an advisory document for the purposes of guiding land development decisions. When a municipality decides to adopt a comprehensive plan, the municipality shall conduct public hearings in order to encourage public participation in and awareness of the development of such a plan and shall accept and consider oral and written public comments throughout the process of developing the plan.

Black Hawk City Attorney Corey Hoffmann presented a Resolution 9-2020, which is a Resolution Adopting the Comprehensive Plan of the City of Black Hawk, Dated February 2020 as the City’s Three-Mile Annexation Plan. Per Colorado Revised Statutes C.R.S. § 31-12-105(1)(e)(I) requires that the City of Black Hawk shall have in place a Three Mile Plan for purposes of considering an annexation proposal. This resolution adopts the newly adopted 2020 Comprehensive Plan as the City’s Three-Mile Plan. Black Hawk City Council approved Resolution 9-2020 unanimously.

Black City Aldermen approved Resolution 11-2020 which is a Resolution Cancelling the April 7, 2020 Regular Election and Declaring Candidates Elected. The City has received the same number of Candidate Petitions and Write-in Affidavits as the number of offices to be filled at the April 7, 2020 election as of the sixty-third day before the election.

Also presented, Resolution Approving the Professional Services Agreement between the City of Black Hawk and PEH Architects in an Amount Not To Exceed $99,503 for Design Services Pertaining to the Mountain City Railing Replacement and Elevator Installation Project which City Council approved. Many of the existing wooden fences in Mountain City are deteriorating, as are some of the metal handrails and guardrails. This project would replace all of the wooden fences and most of the metal railings with new metal railings to provide historic character and continuity throughout Mountain City. Additionally, an elevator is proposed to provide ADA access to the upper tier of Mountain City buildings. This Professional Services Agreement with PEH Architects would authorize complete design services for the Mountain City railings and elevator, and provide administration services during construction.

Resolution 16-2020 is a Resolution Approving the Professional Services Agreement between the City of Black Hawk and PEH Architects in an Amount Not To Exceed $54,861 for Design Services Pertaining to the Lace House Rehabilitation Project. The Lace House is considered Colorado’s premier example of Carpenter Gothic architecture. It was restored in the late 1970s and opened for tours. In 2008, it was moved from its original location on Main Street to its current location in Mountain City. It is the City’s vision to lead guided tours through the Lace House once again. The exterior of the Lace House is in excellent condition and will need minimal restoration. However, all interior finishes must be restored to bring the Lace House up to museum-quality standards. Additionally, electrical, HVAC, and plumbing systems will be installed to meet current building code requirements. This Professional Services Agreement with PEH Architects would authorize complete design services for rehabilitation of the Lace House, and provide administration services during construction. Black Hawk City council approved Resolution 16-2020 unanimously.

Black Hawk City council approved Resolution 17-2020 Resolution Approving Amendment No. 3 to the CMGC Contract Executed on May 22, 2019 between the City of Black Hawk and Taylor Kohrs LLC, Increasing the Guaranteed Maximum Price (GMP) by $162,314 for Completion of Electrical Work and Changed Site Conditions for the Hidden Treasure Trailhead Project. City Council approved a CMGC contract with Taylor Kohrs to complete the Hidden Treasure Trailhead project on May 22, 2019. The initial CMGC contract authorized Taylor Kohrs to proceed with preconstruction services. On July 24th City Council approved Amendment 2 ($2,599,631) which authorized the GMP with the caveat that the electrical scope was not complete and we were still working with CDOT on permits and approvals. Amendment 3 to the Agreement primarily includes the final completed electrical scope including the hawks placards on either side of the bridge, delays and changes from CDOT, and additional excavation and stabilization of the south abutment area. This will bring the overall project GMP to $2,761,945. There is still stabilization of the slope below the south abutment that is currently being designed and priced by the geotechnical consultant as well as some site railing that may be required. Staff will be coming back with that change in the future. The contractor has essentially moved off-site until spring when the weather is more conducive to pouring the bridge deck and completing the fine grading, landscaping, and concrete work.

A Resolution Approving the Soil Nail and Stabilization Easement Agreement with the Rocky Mountain Evangelical Free Church for the Property at 331 Gregory Street was unanimously approved by City Council Wednesday afternoon. A contractor is currently reconstructing the drainage flume between Church and High Streets. They identified a risk to the structural integrity of the historic church at 331 Gregory Street, due to the proximity of the construction to the church building. Therefore, an engineered soil nail system was designed to shore up the building foundation and mitigate this risk. Thanks to prompt verbal and written approval by the authorized representative of the church, the soil nails were successfully installed on January 16th. This easement would formally memorialize the soil nail system.

Black Hawk City Council approved a Resolution Approving the Professional Services Agreement between the City of Black Hawk and Alpine Artisan Studios for the 2020 Christmas Décor Program in an Amount Not To Exceed $175,000. This agreement will provide funding for the acquisition of new products, cleaning and refurbishment of existing products, installation, maintenance, and removal, inventory and condition report and storage of the Christmas décor for the 2020 season. The City is still working on the program for 2020, however, the contractor would like to do some of the cleaning and refurbishing now so that the salts and dirt don’t sit on the products in storage until fall. New items for 2020 will include garlands and bows for Chase Street and Dubois Street, Bobtail Street, and completing the swag for the parking garage.

Black Hawk City Attorney Corey Hoffmann suggested that Council present a motion to recess into Executive Session per C.R.S. 24-6-402 (4)(e) to determine positions relative to matters that may be subject to negotiations; developing strategy for negotiations; and instructing negotiators. Motion passed

The next Black Hawk City Council regular meeting will be held on February 26, 2020 at 3:00 pm at 211 Church Street, Black Hawk, Colorado. For more information, visit http://www.cityofblackhawk.org.

END_OF_DOCUMENT_TOKEN_TO_BE_REPLACED

Benefitting the county, schools, and much more By Don Ireland   This year marks the 30th anniversary of casinos opening in the former little mining towns of Black Hawk, Central City and Cripple Creek, Colorado. In those early years, smoking was allowed inside ... END_OF_DOCUMENT_TOKEN_TO_BE_REPLACED