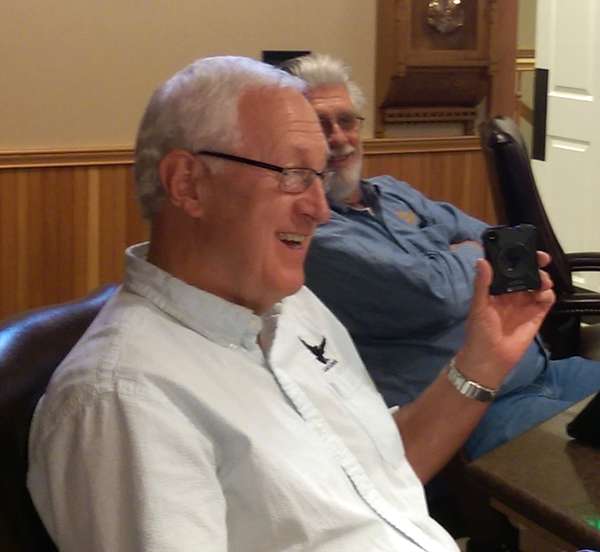 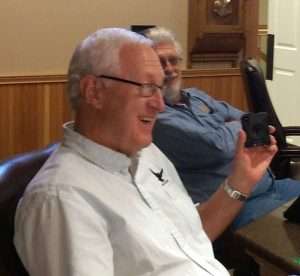 211 Horn Street property to get a $1.2 million historic preservation makeover

Ringing the bell begins each Black Hawk City Council meeting held at 211 Church Street in Black Hawk. On Wednesday, July 12, 2017, the bell was rung by Alderman Linda Armbright. Mayor Spellman then called the meeting to order just before 3:00 pm. He then requested the rollcall, but before the names were called, he mentioned that via a phone call earlier he was able to confirm with absent Alderman Paul Bennet that his surgery had gone well and he was home resting. Following rollcall, everyone in the upstairs chamber stood for the Pledge of Allegiance to the US flag. Confirmed in attendance were: Mayor Spellman, Aldermen Armbright, Johnson, Midcap, Moates, and Torres. Other staff present were City Attorney Hoffmann, City Manager Lewis, Deputy City Clerk Martin, Fire Chief Taylor, Police Chief Cole, Commander Jantz, City Clerk/Administrative Services Director Greiner, and Community Planning and Development Administrator Linker.

June 28, 2017 Regular meeting minutes were approved with no discussion.

Council Bill 12 is an Ordinance Approving an Automatic Aid Intergovernmental Agreement between the City of Black Hawk and Timberline Fire Protection District. Fire Chief Don Taylor explained that the three homes on Hwy 119 which were previously considered in “no-mans-land” were now to be responded to exclusively by The City of Black Hawk Fire Department, following a vote by Timberline Fire Protection District. Mayor Spellman asked about the properties emergency services taxes. It was confirmed that 50% of those taxes from each property was to be given to the City of Black Hawk according to this agreement.

Summary: With the recent positive vote regarding “No-Mans” becoming part of the Timberline Fire Protection District, some clarification was necessary in regards to the Highway 119 South Corridor fire response. This IGA will automatically dispatch the City fire department to all incidents on Highway 119 and those immediately accessible from the highway. The City will also provide fire inspection and plans review for those affected.

Council Bill 13 is an Ordinance Amending Section 13-3(a) of the Black Hawk Municipal Code Regarding the Requirement to Connect to the Municipal Water System. Attorney Hoffman addressed the City Council and stated that the portion of the bill requiring a connection if within 200 feet of a City waterline was to be removed.

City Attorney Cory Hoffman and City Manager Jack Lewis are responsible for this Ordinance Amendment. Mr. Hoffman explained that it is really part of a two-part amendment, because notification had to be given so the second part could not be made at this time. He explained that the original wording would have allowed for water to have been used in the city that came from a well. This is removing that opportunity so all municipalities would be required to use the city water system.

The motion was offered, a second made, and when voted CB13 passed making Ordinance 2017-13, An Ordinance Amending Section 13-3(a) of the Black Hawk Municipal Code regarding the requirement to connect to the municipal water system approved.

Resolution 49-2017 is a Resolution Approving the Total Base Construction Bid and Project Budget for the Rehabilitation and Site Work for the Property Located at 211 Horn Street. Ms. Linker’s description of the two bids received for the challenging project eliminated the higher priced bid so that Big Valley Construction may receive the project.

The City Council hereby approves the total base construction bid and project estimate, and awards the contract to Big Valley Construction for the rehabilitation and site work for the property located at 211 Horn Street as follows:

The amazing benefit of owning a historic home in the City of Black Hawk is that the Historic Preservation Society helped to provide the grant funds for this project.

Resolution 50-2016 is a Resolution Approving the License Agreement Between the City of Black Hawk and Affinity Gaming Black Hawk, LLC. City Clerk, Melissa A. Greiner orchestrated this resolution.

The license agreement is required for the Mardi Gras’ Sounds of Summer Luau scheduled for August 5, 2017. Part of the agreement concerning insurance requires Affinity Gaming Black Hawk to obtain insurance in which each category is a minimum of $1 million in coverage. Coverage is required for Workman Compensation, Commercial General Liability: for damages due to bodily injury, damages arising out of injury to destruction of property for any one occurrence, and Liquor Liability. This Commercial General Liability Insurance is to be the primary policy to include the City of Black Hawk and its employees while covering the affair. The Certificate of Insurance Liability is dated to cover through Nov. 17, 2017, according to Exhibit C.

Many impressions were noted at the City Manager’s Report from the Police Department regarding the new body cameras. City Manager Jack Lewis introduced this accomplishment saying that the process took about 18 months to complete. Black Hawk is the first police force in the area to have body cameras for their officers.  Commander Tory Jantz began to explain the details of the unit and passed it around for the City Council members to understand. Commander Jantz has done all the background research to select and acquire this new law enforcement body camera. He continued to set policy, conducted tests and training for personnel, and facilitates the body cameras for the agency.

The body camera fits in the palm of the hand and attaches to the body by a magnetic plate that can be set on the pocket or other convenient location such as in the center of the chest or near a shoulder. It can also be set to the vehicle when driving. It can be easily removed by someone confronting the officer without hurting them because of a hardwire attachment. It is also able to be used when inspecting under vehicle seats to record what is found before it is touched. The camera can also be set to record what is going on behind a driver with a passenger.

This device’s recording quality is set to replay audio and video images that are only as accurate as the officer can receive. It has no more visibility for light or obstacles than the offer’s own eyes and ears. This is a protection to verify why the officer makes the decisions they do make.

This camera is normally activated by an on-off switch, as soon as the officer recognizes the initiation of threat.  However, it is always on and running a 30 second loop of video so that up to 30 seconds of video is already stored to show what happened just before it is activated to record. That loop is saved also when the off switch is held for six seconds in the event of confronting sensitive situations that may not need to be recorded when considering concerns with children or rape, etc.  The risk of not having accurate documentation seems to outweigh the risks of recording events.

The body camera cooperates with an app on the phone to align with a case number and to categorize the event; as when not criminal, such as responding to a call to unlock a vehicle, or a dispatched response to a suspicious concern.

Mayor Spellman was impressed that the City of Black Hawk Police were the first in the area to use body cameras by law enforcement officers. He was surprised that Jefferson County did not have them in use.

Commander Jantz offered to let the City Council view a body camera in use for a call to unlock a person’s vehicle. Mayor Spellman accepted the offer, so we all were able to see how effective the video camera was. The video only shows the direction the officer is facing, and the sound seemed good enough to understand what went on as the officer unlocked the car, and put away the tools, gathering comments of those around them.

Police Chief Cole answered more questions about the new body cameras after the meeting with the press, confirming details about the technology. He said that Jefferson County hopes to have body cameras in use by September or October. Black Hawk began using them June 14th and all commissioned officers were using them by July 1, 2017. He also commended Commander Jantz for completing this project.

The meeting was adjourned following the body camera demonstration.

The next regularly scheduled meeting of the Black Hawk City Council is Wednesday, July 26, 2017 at 3 pm. Meetings are held on the 2nd floor of 211 Church Street in Black Hawk, Colorado. 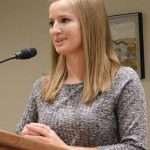 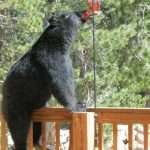