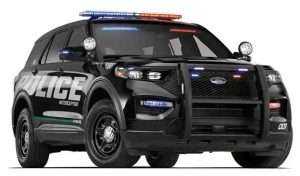 The first Black Hawk City Council regular meeting of 2020 highlighted the purchase of two 2020 Ford Explorers police vehicles and a host of new service agreements for the New Year.

To ring in the new year and a new decade, Mayor David Spellman rang the bell to announce the January 8 2020 session that began promptly at 3:00 pm. Mayor Spellman then called the Black Hawk City Council to order followed by Roll Call, then led in the Pledge of Allegiance.

City Attorney Hoffmann asked Council to declare any Conflicts of Interest on any issue appearing on the agenda that afternoon other that than those already disclosed and filed with the City Clerk and Secretary of State. There were no objections from the City Council or from the onlookers in the chambers.

Black Hawk City Council approved the minutes from the December 11, 2019 regular meeting with no corrections or amendments.

The City Council of the City of Black Hawk, in compliance with C.R.S. § 24-6-402(2)(c) of the Open Meetings Law, hereby designates the City website at www.cityofblackhawk.org as the official place for posting notices. The City may additionally post notices at City Hall, located at 201 Selak Street, and any City social media accounts. If there is a known outage or an emergency meeting, the City may post a physical notice at the public entrance of the City Hall of Black Hawk, located at 201 Selak Street. Black Hawk City Council approved the measure unanimously.

Black Hawk City Council approved the purchase of two new units as presented by Black Hawk Police Chief Kenneth Lloyd. Review of the older police cars, which are 11 years old and have maintenance cost increases, marked police cars which need to be rotated out of service and replaced. The two marked patrol cars being replaced are 2009 Chevrolet Tahoe’s. Phil Long Ford and Johnson Auto Plaza are the two automobile vendors the City of Black Hawk has used in the past. Phil Long Ford quoted 2020 Ford Explorer police package patrol cars, set up with some of the required emergency equipment for the price of $41,875 each. Johnson Auto Plaza could not quote a 2020 police package Chevrolet Tahoe because Chevrolet is not accepting any further orders for 2020 for a police package Tahoe.

City Attorney Corey Hoffmann suggested that Council recess for Executive session per CRS 24-6-402(4)(b), to hold a conference with an attorney for the local public body for the purposes of receiving legal advice on specific legal questions and CRS 24-6-402(4)(e), to determine positions relative to matters that may be subject to negotiations; developing strategy for negotiations; and instructing negotiators.

The next Black Hawk City Council meeting will be held on January 22, 2020 at 3:00 pm at 211 Church Street, Black Hawk, Colorado. For more information visit http://www.cityofblackhawk.org

END_OF_DOCUMENT_TOKEN_TO_BE_REPLACED

Where the dead get to tell their story By Jaclyn Schrock On Saturday, August 21, the Gilpin Historical Society held their annual Cemetery Crawl. Tickets allowed the shuttle of hundreds of guests from the Teller House parking lot to the Cemetery. Depending on v... END_OF_DOCUMENT_TOKEN_TO_BE_REPLACED