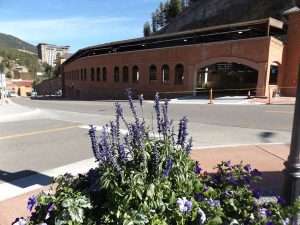 City Attorney Hoffmann asked Council to declare any Conflicts of Interest on any issue appearing on the agenda this afternoon other that than those already disclosed and filed with the City Clerk and Secretary of State. There were no objections from the City Council or from the folks in the audience.

Mayor Spellman opened up the Public Hearing portion of the meeting at 3:03 p.m.

Council Bill 21, is an Ordinance Appointing Two Directors to the Board of the Black Hawk Business Improvement District. The Black Hawk Business Improvement District (BID) was organized by Councilman’s Bill Number 26, Ordinance Number 95-8 of the City of Black Hawk on July 26, 1995. Under that Ordinance and subsequent enactments, the Board of Directors of the District has been appointed by the City Council. All Board members must, by law, be electors of the District. The BID currently has two vacancies on the Board of Directors that is required to be filled by the City Council. Based upon the recommendations provided by owners of taxable property in the BID and other information available to the City, and finding that there is presently a vacancy to be filled on the BID Board, pursuant to Section 31-25-1209(1)(b), C.R.S., the City Council hereby appoints, Rodney C. Turlan, and Brandon Lenssen to the office of Director of the BID. Black Hawk City Alderman approved the appointment unanimously.

Mayor Spellman closed the Public Hearing portion of the meeting at 3:10 p.m.

Black Hawk City Council approved Resolution 60-2018 which is an acceptance of the Preliminary 2019 Quote for Renewal for Property Casualty Insurance with Colorado Intergovernmental Risk Sharing Agency (CIRSA). CIRSA presented a preliminary quote of $236,053 for the annual renewal of the 2019 Property Casualty Insurance. The impact of loss experience decreased the quote by $13,116 bringing the amount of the 2019 Preliminary Quotation down before credits to $222,937. The City of Black Hawk actively works to control our losses and this year earned $5,704 in Loss Control Credits. This credit will be used to further drop the 2019 contribution to $217,233 which results in a 9.38% increase over 2018 coverage. CIRSA has maintained steady rates over the past few years, but the cost of the pool’s property excess insurance has continually and dramatically increased. The increases a result of back-to-back years of unfavorable property claims experience, primarily due to wind/hail losses. These increases are not unique to CIRSA; property losses including major wind/hail storms, snow storms, hurricanes, and tornados are driving up insurance rates across the country and the entire marketplace. In 2018, CIRSA was also required to double its pool self-insurance retention (SIR) for property claims from $500,000 per claim/occurrence to $1M per claim/occurrence), and CIRSA expects their excess carriers will continue to require this higher SIR for 2019. Loss control credits are provided to those members that actively work to control their losses and comply with CIRSA loss control standards. More than $928,808 has been made available between both P/C and W/C pools for 2019. CIRSA individually rates experience for each member. The effect of Black Hawk’s individual experience is reflected in the “Impact of Loss Experience” category. Black Hawk has been successful at using loss control techniques to control our losses, which resulted in a credit of $13,116 for 2019.

Black Hawk Police Chief Stephan Cole presented Resolution 61-20118 which is a revised job description for the rank of Police Sergeant within the Black Hawk Police Department. The current job description for the rank of Sergeant within the Police Department only allows the Chief of Police to consider internal candidates holding a “Level 3 or Level 4” designation to fill vacant sergeant positions. The job description does not allow the Chief of Police the flexibility to consider other potentially qualified candidates who may be working in the Department or qualified applicants from outside the organization. Although it’s desirable to promote applicants from within the organization, there may be situations where qualified internal applicants don’t meet the current job qualifications or there’s a desire to consider applicants from outside the organization. The Police Chief requests a change in the current Sergeant Job Description to allow more flexibility in selecting qualified employees for vacant sergeant positions. In addition, the “Level 3 and Level 4” reference will be changed to “Police Officer 3 and Police Officer 4” consistent with other job descriptions in the Department. Black Hawk City Council approved Resolution 61-2018 unanimously.

Black Hawk City Council approved an agreement with Merrick & Company in the amount of $77,467 for the design of the Green Lake Headgate Project as presented by Engineer Jim Ford. Green Lake was purchased in 2008 and is jointly owned with Clear Creek County. The City’s share of the reservoir storage is 63% and the County’s share is 37%. The existing headgate that diverts flow from Leavenworth Creek into the Green Lake Pipeline is well beyond its useful life and is unable to divert our allocated water. Requests for Proposals were sent to a select number of consulting firms who specialize in water resource projects similar to this. The project was also advertised in the Weekly Register-Call. Black Hawk will administer the contract, make payments to the consultant, and Clear Creek County will reimburse the City for their share of the project. The City’s share will be $48,775 and the County’s share will be $28,691. After review of the proposals, Merrick & Company was determined to be the most qualified consultant to perform the design services. Therefore staff recommends awarding the design project to them.

Black Hawk City Council also approved Resolution 63-2018, which is a Resolution approving authorization for Change Order #9 for the St. Charles Carriage House project in the amount of $64,749 for installation of a License Plate Reader (LPR) Parking Management System.” The City has requested pricing for a parking management system that would deter users of the St. Charles Carriage House from staying for long periods of time. Extensive research was performed by the Police Chief, and it was determined that a License Plate Reader (LPR) system is the best option. A total of six high-resolution LPR cameras will track both incoming and outgoing vehicles at each point of access. The system will allow users to park free for up to four hours; if a vehicle remains in the parking structure after this grace period expires, a bill will be mailed to the owner of the license plate. There will be additional costs for data storage, system subscriptions, and payment transactions. These operating costs would be handled under a separate contract between the City and the LPR system vendor.

City Manager Jack Lewis asked Planning and Development Administrator Cindy Linker to update the City Council on the changes that were made to the Site Development Plan for the Canyon Casino parking lot. Ms. Linker explained that cap stones will be placed on the dry stack wall between the sidewalk and the parking lot and the light poles will change to resemble those in the surrounding area. These changes were done administratively and are consistent with the Resolution (50-2018) that was approved August 22, 2018.

Black Hawk City Council made a motion to recess and move into an Executive Session at 3:30 p.m.