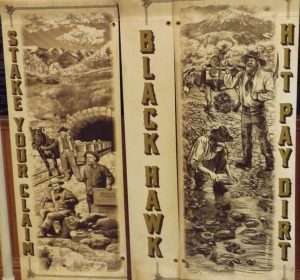 The most recent Black Hawk City Council regular meeting focused on the demolition of non-historic building in the historical district and the purchase of a new fire truck. Alderman Paul Bennett rang the bell to announce the July 10, 2019 session that stepped of smartly at 3:00 p.m. Mayor Spellman called the Black Hawk City Council to order followed by Roll Call, then led in the Pledge of Allegiance.

Black Hawk City Council approved the minutes from the June 26, 2019 regular meeting with no corrections or amendments.

Black Hawk Aldermen approved a Certificate of Architectural Compatibility to Allow the Demolition of Non-Historic Structures Located at 500 Chase Street.

Even though the buildings at 500 Chase Street are located within the National Historic Landmark district (NHL), the site is not considered contributing to the NHL. No previous historic survey of the property was located through a search of the COMPASS, Colorado’s on-line Cultural Resource database, maintained by the Office of Archaeology and Historic Preservation. The 2010 City of Black Hawk Survey indicated no historic associations for the property. The property does not contain buildings or structures that date to the period of significance for the NHL or meet the age guidelines of the National Register of Historic Preservation (NRHP). The property does not demonstrate architectural or thematic associations (i.e., mining) with the development of the City of Black Hawk. It is unlikely that the property would qualify as a City of Black Hawk Local Landmark. The property is not listed to a historic register at the local, state, or national level, and its qualification for such a register is unlikely

Fire Chief and Emergency Manager Christopher Woolley presented Resolution 45-2019 which is a  Resolution approving the purchase of a Light Rescue Fire Apparatus from Super Vacuum Manufacturing Company in the Amount of $180,208 with a Cab and Chassis Prepayment of $52,221.

Ongoing review of the Fire Department’s staffing and call response has revealed areas for improvement in the delivery of emergency services to the residents and visitors of the City. Through this review, call types and frequencies were reviewed and determination was made that an improvement in service delivery and a reduction in impacts to the City and Fire Department can be realized by purchasing a Light Rescue Fire Apparatus designed to address the unique service demands of the City. The intended use of this apparatus is to respond to the majority of EMS responses as the primary response unit, provide support with other suppression apparatus on fires and fire alarms, and increase capability in traditionally inaccessible areas such as parking garages and limited access roads. In addition to the historic information, the review considered future City projects and growth to include the development of Maryland Mountain. With increased recreational activity expected, the purchase of this apparatus addresses the need to be able to effectively and efficiently provide emergency services to the trail users. To best address the Fire Department’s needs, internal discussions with members and officers has centered on the purpose and implementation of this piece of apparatus into the Black Hawk response system. These discussions have included design consideration and appropriate intended uses. As such, the Fire Department has solicited assistance from Fire Department members, apparatus design experts, and the City Fleet Superintendent and communicated the needs of the organization through a request for proposal process. This process resulted in receiving bids from three fire apparatus manufacturers. Based on a thorough review of the submittals, it is noted that the submittal from SVI represents the best value to the City. SVI’s submittal meets all specification of presented in the request for proposal, cost, and will be manufactured in Fort Collins, CO, allowing for efficiency in conducting meetings, acceptance, and warranty repair. Black Hawk City Council, with enthusiasm, approved Resolution 45-2019 unanimously.

Project Manager Matt Reed presented Resolution 46-2019 which is Resolution approving Amendment No. 1 to the Construction Manager/ General Contractor Contract Executed on February 27, 2019, between the City of Black Hawk and Roche Constructors, Inc., Establishing the Phase 1 Guaranteed Maximum Price (GMP) of $883,152 for Construction of Selected Portions of the Gregory Street Phase 2 Project.

City Council approved a Construction Manager/ General Contractor (CMGC) contract with Roche Constructors, Inc. to complete preconstruction services for the Gregory Street Phase 2 project on February 27, 2019. While this CMGC contract authorized Roche Constructors, Inc. to proceed with preconstruction services, Council was made aware that an Amendment to accept the GMP for construction would be forthcoming. The overall GMP will not be established for another two months or so. To avoid delaying the overall Gregory Street Phase 2 project, two critical early-stage items were identified: Relocating the McAfee, Woodbury, and Norton structures located at 305/311, 321, and 351 Gregory Street, and procuring the precast sections of concrete box culvert necessary to reconstruct the flume between Church and High Streets. This Phase 1 GMP, hereby established at $883,152, includes these two items, as well as mobilization, other CMGC costs, and preconstruction costs of $26,452 that were previously approved by Council. Black Hawk City Council unanimously approved Amendment No. 1 to the Construction Manager/ General Contractor Contract.

Mayor David Spellman took the time to focus the attention to all the meeting’s attendees to a series of banners on display in the chambers. In the near future, the banners will adorn city light poles that feature mine stock certificates that were in the Black Hawk area in the 1860 and 1870 era. The original artwork went through a labor intensive process to create the banners from the original certificates. Mayor Spellman thanked City Clerk/ Administrative Services Director Melissa Greiner for her hard work and dedication on the banner project.

Black Hawk City Attorney Corey Hoffmann had nothing to report except the usual recommendation for Council to go into Executive Session regarding specific legal questions related to the growth IGA.

END_OF_DOCUMENT_TOKEN_TO_BE_REPLACED

Benefitting the county, schools, and much more By Don Ireland   This year marks the 30th anniversary of casinos opening in the former little mining towns of Black Hawk, Central City and Cripple Creek, Colorado. In those early years, smoking was allowed inside ... END_OF_DOCUMENT_TOKEN_TO_BE_REPLACED