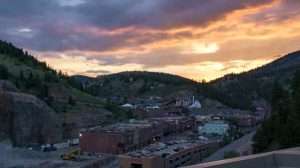 Bobtail Street to get sculpted facelift

Project Manager Matt Reed presented Resolution 13-2019, which is a resolution awarding the bid and approving the Construction Manager/ General Contractor (CMGC) Contract Between the City of Black Hawk and Roche Constructors, Inc. in an amount not to exceed $26,452 for Pre-Construction Services pertaining to the Gregory Street Phase 2 Project. The City intends to redevelop the area along the north side of Gregory Street between Church and High Streets into a commercial plaza area. The existing City-owned buildings in this area (305/311, 321, and 351 Gregory Street) will be renovated, along with the existing structures at 211 and 221 Gregory Street. Two new buildings will be constructed: A public restroom building and a structure that will display one of the City’s antique fire trucks and other historic Fire Department memorabilia. The church at 331 Gregory Street will likely receive an exterior rehabilitation treatment similar to the recent City Hall brick restoration project. Finally, the City desires to renovate the Bobtail Mine building, and move the structure currently at 261 Gregory Street to a location between the Mine building and the Lace House, converting it into a public restroom facility. To manage this work, the City has chosen to pursue a construction manager/ general contractor (CMGC) method of contracting. The intention is for the CMGC to be brought under contract at a point early in the design process. They will provide input into constructability, scheduling, and costs of the project, among other issues. Their first detailed cost estimate will provide direction for the City regarding which portions of the project will need to be postponed or which can be added to the scope, based on the City’s budget. To select a CMGC, the City publicly advertised a Request for Qualifications on November 29th, 2018. Of the seven CMGC qualification packages received by the City, three CMGC finalists were invited to respond to a Request for Proposal, which was released on January 11, 2019. Of the two finalists that submitted Proposals, Roche Constructors, Inc. provided the lowest proposed costs and fees. The goal over the next few months will be to create and refine cost estimates for construction of the Gregory Street Phase 2 project, until the City and the CMGC reach agreement on a Guaranteed Maximum Price for construction. At that time, an Amendment to this CMGC contract will be brought before City Council to establish the GMP and authorize construction. Black Hawk Aldermen approved Resolution 14-2019 unanimously.

Black Hawk City Council also approved Resolution 14-2019 which is a resolution awarding the bid and approving the Design-Build Contract Between the City of Black Hawk and Harrison Western Construction Corporation, Inc. in an amount not to exceed $125,195 for Pre-Construction Services pertaining to the Bobtail Street Sculpted and Stained Shotcrete Project. The City intends to construct a sculpted and stained Shotcrete wall along the south side of Bobtail Street from its intersection with Gregory Street to a point about 450’ east of the intersection. The main goal is to conceal the existing exposed mesh, rock bolts, and Shotcrete, and to create an aesthetically-appealing Shotcrete wall similar to the existing Shotcrete wall behind the Post Office. The design-build method of contracting has been selected for this project. A Request for Qualifications was publicly advertised on November 30, 2018. Two contractors submitted qualification packages, and both were invited to submit Proposals. Of the two Proposals received by the City, Harrison Western Construction Corporation, Inc. provided the lowest proposed costs and fees. Approval of this Resolution would authorize Harrison Western to proceed with a geotechnical investigation, design of the Shotcrete system, and other pre-construction tasks. Over the next two months, Harrison Western will prepare a Guaranteed Maximum Price (GMP) for construction of this project. An Amendment to this design-build contract will be brought before City Council to establish the GMP and authorize construction.

Black Hawk City Attorney Corey Hoffmann had nothing to report except the usual recommendation for Council to go into Executive Session regarding specific legal question on potential upcoming legislation, acquisition of properties, and to address negotiations.

Alderman Bennett made a motion to go into Executive Session to hold a conference with the City Attorney to seek legal advice on specific legal questions pursuant to CRS 24-6-402(4)(b) to determine positions relative to matters that may be subject to negotiations; developing strategy for negotiations; and instructing negotiators pursuant to CRS 24-6-402(4)(e). The motion carried and Black Hawk City Council recessed into Executive Session at 3:10 p.m.

END_OF_DOCUMENT_TOKEN_TO_BE_REPLACED

Benefitting the county, schools, and much more By Don Ireland   This year marks the 30th anniversary of casinos opening in the former little mining towns of Black Hawk, Central City and Cripple Creek, Colorado. In those early years, smoking was allowed inside ... END_OF_DOCUMENT_TOKEN_TO_BE_REPLACED

Where the dead get to tell their story By Jaclyn Schrock On Saturday, August 21, the Gilpin Historical Society held their annual Cemetery Crawl. Tickets allowed the shuttle of hundreds of guests from the Teller House parking lot to the Cemetery. Depending on v... END_OF_DOCUMENT_TOKEN_TO_BE_REPLACED