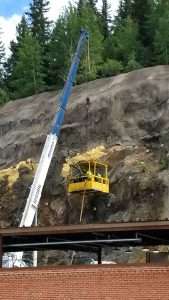 Last Wednesday, July 24, 2019, Black Hawk City Council regular meeting highlights include a Special Election Agreement and a Change Order for the Hidden Treasure Trailhead. Isle of Capri General Manager Rodney Turlan rang the bell to kick off the session that was called to order promptly at 3:00 p.m. Mayor Spellman called the Black Hawk City Council to order followed by Roll Call, then led in the Pledge of Allegiance.

Black Hawk City Council recessed at 3:15 p.m. into a rare but brief mid-session Executive Session to hold conferences with an attorney of the local public body for the purposes of receiving legal advice on specific legal questions per CRS 24-6-402(4)(b).

Black Hawk City Council approved the minutes from the July 10, 2019 regular meeting with no corrections or amendments.

City Attorney Hoffmann presented a Local Liquor Authority Public Hearing for a Change of Class to Hotel and Restaurant Liquor License for Isle of Capri Black Hawk, LLC located at 401 Main Street, Black Hawk, Colorado. On May 24, 2019, the City Clerk’s office received an application for a Change of Class Liquor License for Isle of Capri from a Retail Gaming Tavern License to a Hotel and Restaurant License (processed as a new application) in order to furnish and deliver complimentary alcoholic beverages in sealed containers for the convenience of its guests (C.R.S. §44-3-413(4)(a); and potentially conduct room service. On June 3, 2019, the application was deemed complete by City Clerk staff. On June 12, 2019, the Local Liquor Authority reviewed the application and set the boundaries of the neighborhood and set the date of July 24, 2019 for the public hearing providing the applicant enough time to prove the reasonable requirements of the neighborhood needs and desires and cause the public notice to be posted and published. On July 11, 2019, the public notice was published in the Weekly Register-Call and posted on the property. On July 15, 2019, the petitioner submitted documentation supporting the facts and evidence required for the Public Hearing. Black Hawk City Council approved the class change unanimously.

Black Hawk Aldermen also approved Council Bill 15 which is an Ordinance Approving an Intergovernmental Agreement (IGA) for the 2019 Special Election Between the City of Black Hawk and Gilpin County by the Gilpin County Clerk and Recorder. The City of Black Hawk will be conducting a Special Election on November 5, 2019 to be conducted as an independent polling place election. The election will include a TABOR (Taxpayer Bill of Rights) issue that the City is requesting the County to coordinate.

Black Hawk Public Works Director Tom Isbester presented a Resolution approving Amendment No. 2 to the Construction Management/General Contractor (CMGC) contract with Taylor Kohrs dated May 22, 2019, and therefore accepting the GMP of not to exceed $2,599,631 plus 5% City contingency for construction of the Hidden Treasure Trailhead project for a total of $2,699,631. City Council approved a CMGC contract with Taylor Kohrs to complete the Hidden Treasure Trailhead project on May 22, 2019. While the initial CMGC contract authorized Taylor Kohrs to proceed with preconstruction services, Council was made aware that an Amendment to accept the GMP for construction would be forthcoming. Due to the tight timeframes necessary to construct this improvement yet this year, Amendment 1 was ratified at the June 26th council meeting to provide a deposit and secure a production slot for the bridge for an early October 2019 delivery. The City is still waiting for permits from CDOT but everything has been submitted. This GMP of $2,599,631 establishes the maximum price of the project and includes preconstruction costs originally approved by City Council. There are several late added design elements that are still underway including electrical and site lighting and would request that Council authorize an additional 5% contingency for the City’s use in adjusting for any changes from the GMP plans. A new XCEL service will be required at this location as well as for any additional last minute CDOT permitting requirements. Black Hawk City council approved Resolution 47-2019 unanimously.

Black Hawk Public Works Director Tom Isbester also presented Resolution 48-2019 which is a Resolution awarding a change order to the professional services agreement with Stolfus and Associates and authorizing the Mayor to execute the same for the Hidden Treasure Trailhead Construction Administration. The Hidden Treasure Trailhead Project is ready to begin. Back on January 9th when the final design phase of work was resurrected and additional design work started, Council was made aware that staff would be back to request authorization for Construction Administration assistance concurrent with the construction price authorization. Since that time the project has morphed into a CMGC contract with a GMP. This change helped to speed up the overall timeline of the work, but also required plans and specs to be reworked to facilitate this method of project delivery. Additional scope changes have occurred since January as well. This Change order will provide for daily on-site observation by either the designer, structural engineer, electrical, or the geotechnical engineer as necessary depending on the phase of work. This inspection is critical due to nature of the work and bridge over the highway and requires specialized expertise. This will also provide for quicker responses for any field changes required by differing site conditions. Black Hawk City council also approved Resolution 48-2019 unanimously.

Black Hawk City Council approved the Combined Addendum to the Subdivision/ Site Improvement Agreement dated June 21, 2017 and the fourth Addendum to the Subdivision/ Site Improvement Agreement dated December 12, 2018 between the City of Black Hawk and the Lodge Casino LLC and JIJE LLC. City Attorney Corey Hoffmann explained that all this addendum will do is allow the temporary occupancy of the Bonanza and Dakota parking lots located on Main Street. In the unlikely event that the public improvements are not completed by November 20, 2019 the right to use both parking lots will be revoked.

City Attorney Corey Hoffmann announced that one of the many updates with new legislation that have passed, includes the ability to change the method in which meeting notices are distributed. Starting January 1, 2020 new notifications will be posted electronically as opposed the current physical posting. With many groans from the City Council members, Mayor Spellman agreed that the meeting notices will also be physically posted at City Hall.

END_OF_DOCUMENT_TOKEN_TO_BE_REPLACED

Benefitting the county, schools, and much more By Don Ireland   This year marks the 30th anniversary of casinos opening in the former little mining towns of Black Hawk, Central City and Cripple Creek, Colorado. In those early years, smoking was allowed inside ... END_OF_DOCUMENT_TOKEN_TO_BE_REPLACED

Where the dead get to tell their story By Jaclyn Schrock On Saturday, August 21, the Gilpin Historical Society held their annual Cemetery Crawl. Tickets allowed the shuttle of hundreds of guests from the Teller House parking lot to the Cemetery. Depending on v... END_OF_DOCUMENT_TOKEN_TO_BE_REPLACED