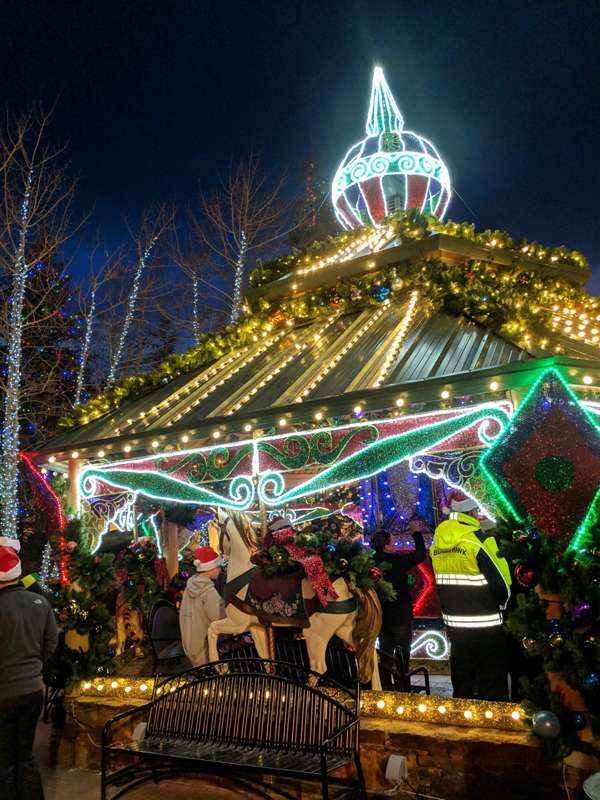 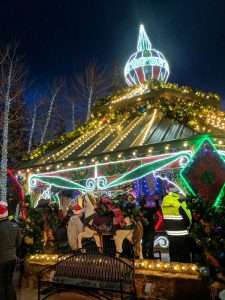 Black Hawk’s Mayor David Spellman and City officials hosted the annual lighting ceremony to kick off the holidays at 5:00 p.m. on Tuesday, November 27, at the gazebo at Stroehle Square at the corner of Gregory and Main Streets. The evening was crisply cool but pleasant, darkness was just setting in, and crowds were gathering to munch snowman cookies and warm up with mugs of cocoa or cider. Visitors donned free Santa hats as they anticipated the countdown to the lighting of one of Colorado’s largest displays.

Spellman greeted the folks. “I’d like everyone to acknowledge and show their gratitude to our City employees for another successful year. They are the reason the City operates as efficiently as it does.”

The mayor noted that each department is necessary, whether its employees work on the street or in the office.

“I’d also like to reflect at year end on a couple of our accomplishments – the three-story St. Charles Carriage House parking garage on Gregory Street and the 23-story Monarch Hotel tower,” he said.

“I’m just as proud of the three-story parking garage as I am of the hotel tower. It’s in keeping with our motto – Preserving the Past, Preparing for the Future, Still Making History!”

On hand to throw the switch to light up the City were the two youngest residents of Black Hawk, five-year-old Lila Blake and three-year-old Larsen Blake, who are sixth-generation Black Hawkites. The children were excited to carry out their big responsibility, with the help of their grandparents, Kent and Diane Blake. The crowd counted down from ten, and when they reached the magic “ONE!” the kids pulled the switch, and Black Hawk was ablaze with red, green, white, and blue lights.

There was an anxious moment as the large board holding the switch tipped, but helping hands quickly got it righted.

The Gilpin County Middle School choir, directed by Misty Ebers, provided several seasonal tunes, including “Carol of the Angels,” “Little Star,” “On a Starlit Night,” and “Winter Fantasy.” The songs incorporated familiar carols and were the perfect accompaniment for the lighting occasion.

M & C Communications provided some vital stats on the holiday display for this year:

The contractor that creates, maintains, and installs the holiday décor is Alpine Artisan Studios.

There are more than 150 lamp posts decorated with garlands and 92 with red LED lit bows.

There are more than 110 props, including signs, figures, snowflakes, wreaths and characters.

There are 21 red-green-blue building wall lights.

There is over a mile of LED rope light, a half-mile of garland, and nearly 500 pounds of glitter.

Crews worked for three weeks to clean and refurbish the décor.

Removal and storage takes about another week towards the end of January.

The lighting custom has been on-again, off-again, at some points including the Peak to Peak Chorale. Last year, about 100 visitors stopped in during the lighting ceremony, and it looked like another record crowd this year.

Be sure to include a stop at Mountain Life Park next to the post office, and check out the huge lighted pines, bear and deer figures, children hanging Christmas ornaments, and much more. 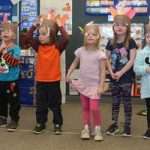 ‘Tis the season for sharing!
Next Article 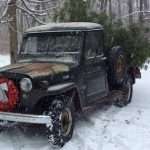