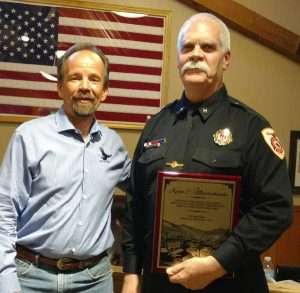 The bell was rung by Black Hawk Fire Captain Kevin Martschinske and his wife and Daisy to announce the regular meeting of the Black Hawk City Council. The meeting was called to order on Wednesday, April 5, 2017 at 3:00 p.m. by Mayor David Spellman.

After the Pledge of Allegiance led by Mayor Spellman, City Attorney Hoffmann asked Council to declare any Conflicts of Interest on any issue appearing on the agenda this afternoon other that than those already disclosed and filed with the City Clerk and Secretary of State. There were no objections.

City Attorney Hoffmann asked the audience if there were any objections to any member of City Council voting on any issue on the agenda that afternoon. The audience had no objections.

Mayor Spellman honored soon to be retiree Fire Captain Kevin Martschinske with a plaque from the City of Black Hawk for 17 years of service. Mayor Spellman stated that Kevin wrote the first Standard Operating Procedures for the Black Hawk Fire Department, he was the first paid Training Officer for the department, and authored several Standard Operating Guidelines to include Line of Duty Death and Chaplin policies. Captain Martschinske is a member of the Colorado and National Chaplin Associations. Mayor Spellman also added that Kevin has the honor and distinction to be the first Chaplin to serve on the Black Hawk Fire Department since its inception in the 1870’s. Good luck to Kevin and thank you for your years of service.

Black Hawk City Council approved the meeting minutes from the March 22, 2017 meeting with no changes or corrections.

Mayor Spellman opened up the Public Hearing portion on the City Council meeting.

The City Council recognizes that open or public consumption of marijuana is illegal in the state despite legalization of the substance under the Colorado Constitution and state law, and finds there is an unmet need within the City for private, safe and regulated places where adults can legally use and consume marijuana in a social setting.

The City Council finds such private social use or consumption of marijuana should be regulated locally to minimize the potential adverse impacts on its citizens potentially caused by violations, underage consumption and civil disturbances, as well as to maintain peace and tranquility and to further the historic character of the City. Applications for a private social club permit shall be made to the City Clerk with forms provided by the City Clerk for that purpose. An application fee pursuant to a separate resolution setting the City of Black Hawk Fee Schedule shall be submitted at the time of application. The application shall include a site plan defining the club premises, showing where members will be permitted to gather, identifying indoor and outdoor seating or gathering areas, showing parking locations for members, and identifying all intended uses of the club premises. The application shall demonstrate how the premises will be adequately separated by physical barriers and ventilation to prevent observation by site, sound, or smell of the premises from outside of the premises. The application shall further describe the methods that will be used to be used to confirm a member’s age, to restrict all underage access to the club, to maintain the club’s privacy, and to prevent public access. The City Clerk shall grant a private social club permit, provided that the application is fully completed and is in compliance with this Article and the ordinances of the City. There were no comments in opposition CB 5 there was one public comment in favor of CB5. Geoffrey Gordon wanted to point out the Colorado Clean Air Act (CCAA) and the bills pending or proposed in Denver. Some of those proposed bills override the CCAA and allow for a mechanism where by the air is exchanged or what is often referred to as “Smoke eaters” and thus allow those facilities to proceed and be in compliance. Gordon hopes that Council will allow something of that nature to be included in the Ordinance, so that indoor smoking can be allowed as opposed to partitioned outdoor smoke. The Aldermen took the comment into consideration and passed Ordinance 2017-5 unanimously.

Mayor Spellman then closed the Public Hearing portion on the City Council meeting.

Local Liquor Authority Approved a request for a new Tavern Liquor License for JE Tavern, Inc. dba JE Tavern at the Gilpin Casino at 111 Main Street, #A to set the boundaries of the neighborhood and to set a date for Public Hearing.

The City Clerk’s office received a new tavern liquor license application from JE Tavern, Inc. on March 16, 2017. The tavern will be located outside behind the Gilpin Casino, 111 Main Street. A 10’-3” x 12’-3” enclosure is proposed to house this new tavern. The application was deemed complete on March 23, 2017. As per Ordinance 2015-6 (a), that amended Chapter 6 of the Black Hawk Municipal Code, Section 6-61 states, “The City Clerk shall place on the agenda of a City council meeting the request for a new liquor license. The meeting shall be held not less than four (4) days nor more than thirty (30) days after the City Clerk has received the application. The date the completed application is received by the City Clerk shall be deemed the date of filing of the application.” Section 6-61 (b) states “The City Council shall set the boundaries of the neighborhood and shall set a date for public hearing. The public hearing shall be held not less than thirty (30) days from the date of the City Council meeting in which the application was presented.” The next Council meeting to fall within this requirement would be May 10, 2017. This will provide the applicant enough time to prove the reasonable requirements of the neighborhood needs and desires and cause the public notice to be posted and published.

END_OF_DOCUMENT_TOKEN_TO_BE_REPLACED

Where the dead get to tell their story By Jaclyn Schrock On Saturday, August 21, the Gilpin Historical Society held their annual Cemetery Crawl. Tickets allowed the shuttle of hundreds of guests from the Teller House parking lot to the Cemetery. Depending on v... END_OF_DOCUMENT_TOKEN_TO_BE_REPLACED