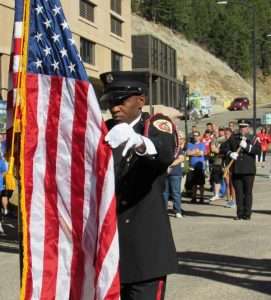 The vintage church bell was rung by Saratoga Casino Director of Security and Surveillance, John Helmerich, promptly at 3:00 p.m. to signify the start of another Black Hawk City Council meeting on September 12, 2018. Mayor David Spellman called the Black Hawk City Council to order followed by Roll Call, then led in the Pledge of Allegiance.

City Attorney Hoffmann asked Council to declare any Conflicts of Interest on any issue appearing on the agenda this afternoon other that than those already disclosed and filed with the City Clerk and Secretary of State. There were no objections from the City Council or from the folks in the audience.

Mayor Spellman opened up the Public Hearing portion of the meeting at 3:03 p.m.

City Clerk/Admin Services Director Melissa Greiner presented Council Bill 18, which is an Ordinance adopting the Black Hawk Employee Handbook dated September 2018. Changes were pursuant to Section 206, Amendments to Policies of the current 2014 Employee Handbook. Alderman Torres expressed his concern about the language in the Definitions Section that states “Advancement” means a salary increase.” Alderman Torres stated that an employee can advance without an increase in salary. If the employee takes on more responsibility or in is charge of a facility, then that should be accompanied with an increase in salary, but sometime it doesn’t. The employee can also get demoted to a lesser position and keep the salary from the advancement. Greiner and City Attorney Hoffmann and the remaining Council all agreed that the only place where “Advancement” is used is in Section 213 titled, “SALARY ADVANCEMENT / SPECIAL CIRCUMSTANCES.” After a little more debate, Black Hawk City Council approved Ordinance 2018-18, unanimously.

END_OF_DOCUMENT_TOKEN_TO_BE_REPLACED

Benefitting the county, schools, and much more By Don Ireland   This year marks the 30th anniversary of casinos opening in the former little mining towns of Black Hawk, Central City and Cripple Creek, Colorado. In those early years, smoking was allowed inside ... END_OF_DOCUMENT_TOKEN_TO_BE_REPLACED