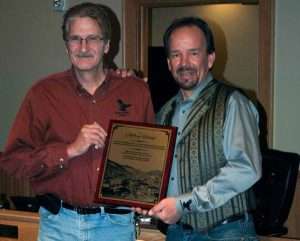 Members of the City Council held a cake reception for retiring City IT Director Jeffrey Young. Young began his career with the City in April 2003 as an IT Consultant before becoming a the IT Director in December of 2007. Young thanked the City for working with him as the City’s IT department started from scratch. “We started from almost nothing to where we are today,” Young said.

Aldermen conditionally approved a recreational marijuana business license application for 5B1S, LLC DBA 1859 at 231 Gregory Street. The conditions included that the business obtain all other required permits or licenses related to the operation of a recreational marijuana store, complete background investigations on all employees, and a City inspection of the premises.

City Council approved the 2015 budget. The City’s total revenue is projected to be $25.9 million, a decrease of 1.9% over 2014’s. The City is anticipating gaming tax revue to be flat as compared to the previous year, though device fee revenues are expected to be up slightly. Sales tax revenue is also expected to be flat. There will be no increase in water rates, property taxes or device taxes.

Total expenditures are budgeted at $39.2 million. Due to ambitious capital projects incurred in 2014 and 2015, the General Fund, Capital Projects Fund, Preservation & Restoration Fund and the Water Fund are projected to have significant deficit spending. Proposed capital funds projects include construction of a commercial building on Gregory Street ($6.3 million) and construction of a parking structure on Gregory Street ($2.8 million from the budget coupled with $1.5 million from parking impact funds).

Aldermen approved Council Bill 26 that sets the property tax mill levy at .039 mills. The mill levy is the same as 2014’s rate. The assessed value for property in Black Hawk according to the Gilpin County Assessor is $217,921,025. The tax will produce $8,499 in revenue for the City.

The City Council approved two certificates of appropriateness for full exterior rehabilitation and site work at two different residences. The first was for applicants Lloyd and Christina Larsen for a historic dwelling located at 301 High Street. The second was for applicants Josh Smith and Mary Keefhus for property located at 401 Chase Street.

Change of Use for Sanitary Sewer Taps

Aldermen approved a resolution authorizing the change of use of the sanitary sewer taps on city-owned property located at 211 and 260 Gregory Street. The sewer taps were classified as “gaming,” however; the City intends the property to be used for non-gaming commercial activities. Downgrading the tap use to reflect the non-gaming commercial status will reduce the associated user fees incurred by the City.

City Council approved the 2015 Holiday Schedule and the 2015 City Council Regular Council Meeting Schedule. The City has eleven approved Holidays slated for 2015. Veteran’s Day was removed from the recognized holiday list and turned into a floating Holiday as a cost saving measure to the City. “It does not mean that Veteran’s Day is not important in the scheme of things,” City Manager Jack Lewis noted.

City Council approved the placement of a veteran’s memorial plaque at the Dory Hill Cemetery. The request was made by the Mountain Rendezvous Chapter of the Daughters of the American Revolution to honor the deceased veterans interred at the cemetery. Council voted to require that a bronze plaque be used standard with other Black Hawk plaques, and also approved covering the cost different of the upgrade from the enamel black requested by the DAR. The City will build a quartz memorial to go along with the plaque and voted to cover the cost of that addition as well.

City Manager Jack Lewis requested the Council to decide whether the City should keep its current use of USA Cable’s channel 10 or discontinue use of the antiquated form of media. Lewis noted that in order to continue using the cable channel as a means of promoting information to residents about the City, $500-$1000 in equipment upgrades would be needed. He questioned the value in retaining the channel considering the City recently launched a new website that contains the same, if not more, information. Aldermen agreed that the cable channel was unnecessary and gave Lewis approval to continue with the website only.

The next regularly scheduled meeting for the Black Hawk City Council is Wednesday, January 14th at 3:00 p.m. in the council chambers located upstairs at 211 Church Street, Black Hawk.

Photo caption: Retiring IT Director Jeffrey Young receives a plaque thanking him for his service to the City of Black Hawk from Mayor David Spellman.

END_OF_DOCUMENT_TOKEN_TO_BE_REPLACED

Benefitting the county, schools, and much more By Don Ireland   This year marks the 30th anniversary of casinos opening in the former little mining towns of Black Hawk, Central City and Cripple Creek, Colorado. In those early years, smoking was allowed inside ... END_OF_DOCUMENT_TOKEN_TO_BE_REPLACED

Where the dead get to tell their story By Jaclyn Schrock On Saturday, August 21, the Gilpin Historical Society held their annual Cemetery Crawl. Tickets allowed the shuttle of hundreds of guests from the Teller House parking lot to the Cemetery. Depending on v... END_OF_DOCUMENT_TOKEN_TO_BE_REPLACED