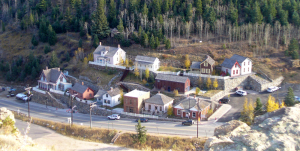 Aldermen approved Resolution 66 that issued a Certificate of Appropriateness for a new garage door at the historic 261 Church Street residence. The applicant, Judith Jasper, requested the approval for installation of a new garage door in an existing garage. The new door will be similar to a historic carriage door and will be constructed of metal that has the appearance of a wood grain finish. The door will be ordered in a color that is similar to the “Polished Pearl” trim of the structure.

Aldermen also approved a minor amendment to a previously approved Certificate of Appropriateness for the construction of a small shed on the southwest corner of the property at 301 Chase Street. The applicant, Larry Linker, received the initial Certificate of Appropriateness from City Council on May 8, 2013 through Resolution No. 22-2013. The Chase Street location is counted as a “contributing” feature to the Historic District. However, the proposed shed is less than 200 square feet and thus does not require a building permit or site development plan.

The issue at hand is that Public Service does not intend to hook up the City’s Miner’s Mesa facilities to the proposed gas line, but rather seeks to make the City pay $70,000 to do so. “If you grant this, we lose all leverage,” City Manager Jack Lewis advised the Aldermen.

Council members discusses the variables of the situation, which include the fact that Public Service already has the easement and that one of Black Hawk’s water lines is in that easement. In the end, Aldermen approved the measure, however, the Council intends have further discussions on a strategy to address hooking the Miner’s Mesa structures up to Public Service gas lines.

City Finance Director Lance Hillis stated to the Board that the lessee intends implement an art gallery in the Reeves House as well as a healing center with yoga and physical therapy in the other locations. Hillis also discussed with the Aldermen Fernandez’s possible plans to include a sauna, float tubs, and hot yoga room in the future. Mayor Spellman stated that those uses would have to be approved by the City Council first, and Hillis noted that the lessee had been advised as such.

The City Council also approved a lease agreement with Terry Peterson for 420 Gregory Street. Peterson’s lease is also for three years and has similar terms as the one for Fernandez. Hillis advised the Board that the location would be used for office space.

Aldermen approved the Mountain City Roof Replacement Project brought before them by City Public Works Director Tom Isbester. Isbester stated that the cedar shake roofs on the historic buildings in Mountain City were in poor condition and require significant upkeep each year from his department. The project would remove the cedar shakes and replace them with asphalt shingles as well as install ice and water shields beneath the shingles.

After advertising the project in the Weekly Register-Call and the Denver Daily Journal, Isbester received bids from two roofing companies. The winning bid was for $64,345.00 and was awarded to D&D roofing. The project is slated to begin September 10th with an estimated completion of October 17th.

City Clerk/Administrative Services Director Melissa Greiner advised the Board that the City had received a preliminary quote from the Colorado Intergovernmental Risk Sharing Agency (CIRSA) for the 2015 Property Casualty Insurance. The quote of $200,637 is an overall decrease of 3% over the 2014 costs. Greiner said the 3% decrease is a direct result of Black Hawk using successful loss control techniques to control losses.

The next regularly scheduled meeting for the Black Hawk City Council is Wednesday, September 24th at 3:00 p.m. in the council chambers located upstairs at 211 Church Street, Black Hawk.