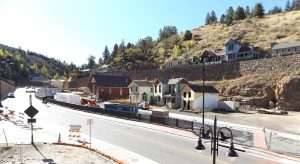 David Young spent the first 12 years of his life in Nebraska before moving to Colorado with his family and graduating from Dakota Ridge High School. He now lives just down the hill from Black Hawk in the Morrison area. He has a background in concrete construction and started a career in the fire service as a volunteer with Fairmount Fire Protection District in 2013. Since that time, he has enjoyed deploying on wildfire incidents around the country. David spends his spare time playing with his son, who also enjoys his sport of choice, ice hockey. David participates in an ice hockey league with his team of other firefighters from the metro area. He also likes to go camping and fishing with his wife and son at his favorite location near Kenosha Pass. David says he is having a wonderful experience working at the Fire Department. Everyone has been extremely nice and welcoming, and he is looking forward to creating new bonds with the people here and working hard for the City of Black Hawk.

Black Hawk City Council approved Ordinance 2019-20 which is an Ordinance Approving the Eighth Amendment to Service Plan of the Silver Dollar Metropolitan District to allow the provision of (1) Transportation Services Pursuant to C.R.S. § 32-1-1004(9); (2) Activities in Support of the Business Recruitment, Management and Development Pursuant to C.R.S § 32-1-1004(9); and (3) A Change in Number of the District’s Board of Directors from Five (5) to Nine (9) Pursuant to the City of Black Hawk Home Rule Charter.

SUMMARY OF PROPOSED AMENDMENTS: Chapter 16, Article V, Division 1 – Commercial/Business Services (C/BS): This amendment adds indoor or outdoor event centers and indoor mini-warehousing and storage to the list of permitted principal uses. In addition, this amendment adds indoor shooting ranges and campgrounds to the list of special review uses. Other minor changes are proposed to clarify certain sections and fix typographical errors included in the last adopted code. Chapter 16, Article V, Division 6 – History, Appreciation and Preservation District (HARD): This amendment adds language reflected in the Gregory Street Sub-Area Plan adopted as an amendment to the Comprehensive Plan on October 23, 2013 by Resolution No. 40-2013. This added language reflects the desire for the planned Gregory Street area to allow for and encourage close spacing of commercial buildings in order to promote a personal pedestrian commercial experience. In addition, this amendment alters the lot dimension and setback regulations to allow for closer building spacing.Black Hawk City Council approved Ordinance 2019-21 unanimously.

City Council approved a Construction Manager/ General Contractor (CMGC) contract with Roche Constructors, Inc. to complete preconstruction services for the Gregory Street Plaza project on February 27, 2019. Additionally, City Council approved a Phase 1 Amendment to this Agreement on July 10, 2019 that authorized Roche Constructors to move the McAfee, Woodbury, and Norton Houses off their foundations and procure the precast sections of concrete box culvert necessary to reconstruct the flume between High and Church Streets. This Phase 2 GMP includes the previously-approved costs mentioned above, as well as costs to:

Resolution 63-2019, a Resolution approving the Trade Contractor Agreement, and authorizing the Mayor to execute the same, between Brennan Stone Masonry and the City of Black Hawk, for the construction of the stone retaining wall for the Clear Creek Parking Lot. The Clear Creek Parking Lot project has been ongoing for over a year. XCEL finally relocated the lighting necessary to allow continuation of the work. After going several years without being able to find a stone mason for City projects, staff has recently engaged Brennan Stone Masonry to install the monument sign for the EOC and has been satisfied with their work. This project will include a short stone masonry wall along the south and east side of the parking lot. Black Hawk City Council approved Resolution 63-2019 unanimously.

Black Hawk Aldermen approved  Resolution 65-2019 which supports the grant application for a Local Parks and Outdoor Recreation Grant from the State Board of the Great Outdoors Colorado Trust Fund for the Completion of Maryland Mountain Park Trail Project. The City has requested $400,000 from Great Outdoors Colorado to create a trail system. Results of this application will be announced at a later date.

The City of Black Hawk has received an application from MBA Architecture and Monarch Growth Inc. requesting a Variance to the minimum driveway width from 20 feet to 14.5 feet for an access/egress point at the west end of the Monarch Casino which City Council approved. The variance is being requested as part of the porte cochere (covered driveway) conversion into a poker room. Once the renovations are completed, the existing valet parking area will be used exclusively by Monarch staff for overflow valet parking. With the addition of the new parking garage on the east end of the Monarch property, the need for the valet lot located under the existing casino is reduced. Monarch plans to use the existing ground level and lower level valet parking areas for overflow valet parking only. Monarch has indicated that this overflow valet lot will be accessed by Monarch personnel only and public access will be restricted. The existing porte cochere is designed with a two-way entrance/exit on the east end and a one-way exit on the west end. The proposed addition of a poker room in the location of the existing porte cochere will reduce the access to the parking area to a single two-way entrance on the west end. In order to mitigate the traffic flow changes and safety issues introduced by the proposed change, the applicant has proposed the addition of the following:

Resolution 67-2019 is a Resolution approving the First Amendment to the Agreement of Lease between the City of Black Hawk as lessor and Ed & Shirley, Inc. as lessee for property located at 200 Gregory Street, Black Hawk, Colorado. The First Amendment to the Lease provides alternate parking due to the Gregory Street Phase 2 Project. With the need to use the Briggs Lot for staging and laydown, the City has impeded access to the Lessee’s parking lot located immediately west of the Briggs Lot. This amendment provides additional surface parking between the Crook’s parking lot and the St. Charles Parking Garage for the duration of the time access is denied to Lessee. Black Hawk City Council approved Resolution 67-2019 unanimously.

Black Hawk Aldermen approved the 2020 Quote for Renewal for Property Casualty Insurance with Colorado Intergovernmental Risk Sharing Agency (CIRSA). CIRSA presented a preliminary quote of $263,667 for the annual renewal of the 2020 Property Casualty Insurance. The impact of loss experience decreased the quote by $12,874 bringing the amount of the 2020 Preliminary Quotation down before credits to $250,793. The City of Black Hawk actively works to control losses and this year earned $3,848 in Loss Control Credits. This credit will be used to further reduce the 2020 contribution to $246,945 which results in a 12% increase over 2019 coverage. While the City’s loss ratio decreased from .89 to .88, the following factors contributed to the increase in the City’s annual contribution:

This Communication System and Service agreement between the City of Black Hawk and Motorola Solutions, Inc. is to upgrade the radio communications system radio consoles in the communications center to 800 MHZ (DTRS). The City of Black Hawk in conjunction with Clear Creek County Sheriff’s Department and the Gilpin County Sheriff’s has shared the same radio system LCORE for over a decade on a VHF radio system. With the aging system and increased cost to the radio maintenance, the City is migrating to the State of Colorado’s DTRS system, also known as 800MHZ radios. The DTRS system will have lower annual maintenance costs of $12,000 in 2020, compared to $50,957 paid in 2019 for annual maintenance fees. The DTRS system will allow interoperability with many law, fire, and emergency services throughout the state. The City will transition to the DTRS system at the same time as Gilpin and Clear Creek County Sheriff’s Departments do in March 2020. As part of the transition, the communication system must be upgraded and new equipment installed. This agreement for $67,101 is to upgrade the dispatch consoles in the Black Hawk Communications Center. Black Hawk City Council approved Resolution 69-2019 unanimously.

END_OF_DOCUMENT_TOKEN_TO_BE_REPLACED

Benefitting the county, schools, and much more By Don Ireland   This year marks the 30th anniversary of casinos opening in the former little mining towns of Black Hawk, Central City and Cripple Creek, Colorado. In those early years, smoking was allowed inside ... END_OF_DOCUMENT_TOKEN_TO_BE_REPLACED

Where the dead get to tell their story By Jaclyn Schrock On Saturday, August 21, the Gilpin Historical Society held their annual Cemetery Crawl. Tickets allowed the shuttle of hundreds of guests from the Teller House parking lot to the Cemetery. Depending on v... END_OF_DOCUMENT_TOKEN_TO_BE_REPLACED