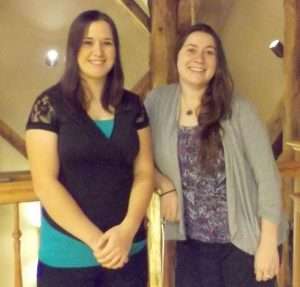 Highlights of the Black Hawk City Council meeting on November 13, 2019 included the adoption of the 2020 budget, holiday bonuses for Black Hawk employees, and a revision of the City’s Sign Code. New Communications Officers Rebecka Allen and Amy Flynt rang the vintage church bell promptly at 3 p.m. that announced the start of the Black Hawk City Council meeting. Mayor Spellman called the meeting to order followed by Roll Call, then led in the Pledge of Allegiance.

Rebecka Allen grew up in Gilpin County and graduated from Gilpin County High School. She went to Colorado Northwestern Community College and graduated with a degree in Equine Science. Rebecka has been a volunteer firefighter with Central City Fire Department since 2014 but otherwise likes to spend her time outside riding horses, hunting, and fishing. Rebecka grew up with three older brothers, two of which are in the Air Force and the other is a Lieutenant on the Central City Fire Department. They have always been Becka’s inspiration to do what’s right and fueled her passion to work in Public Service.

Amy Flynt grew up in Colorado and has lived in several cities throughout the state. She is currently a Gilpin County resident. After high school, she moved to Wyoming to complete her undergraduate degree in Social Work. In 2017, she graduated with a Master’s of Social Work from Metropolitan State University at Denver. Previously, Amy has worked with children, youth, and families in her role as a Child Protection and Adult Protection Caseworker. In addition, she has worked with older adults in her role as Social Services in several long term care facilities, as well as with troubled teens in her role as a trauma-informed assessor (helping trauma victims), and a foster parent. In her free time, Amy enjoys spending time with her dog (Ernie), friends, and family. She also enjoys hiking, most water-sport related activities, watching movies, reading a good book, and listening to music.

Black Hawk City Council approved the minutes from the October 23, 2019 regular meeting with no corrections or amendments.

Black Hawk Aldermen approved Resolution 75- 2019 which consists of summarizing expenditures and revenues for each fund and adopting a Budget for the City of Black Hawk, Colorado for the calendar year beginning on the first day of January 2020 and ending on the last day of December 2020, and appropriating sums of money to various funds and spending agencies in those amounts. The 2020 Proposed Budget was presented by Black Hawk Finance Director Lance Hillis at the October 23, 2019 Public Hearing. Copies of the 232 page 2020 Budget will be available by request or posted on the http://www.cityofblackhawk.org/ web site for review.

There’s not a whole lot of information on CB24 except it is an Ordinance levying General Property Taxes for the year 2020 to help defray the costs of government for the City of Black Hawk, Colorado for the 2020 Budget Year. Black Hawk City Council voted for a continuance of CB24.

Baseline Corp AIPC Ethan Watel introduced Council Bill 23 that revises the City Sign Code.  The City of Black Hawk has identified the need to update portions of the Municipal Code within Chapter 15 (Sign Code). The proposed amendment includes corrections and clarifications to portions of all Articles, the addition of small temporary signs permitted without a permit in both the residential and nonresidential districts, and the addition of Division 3 of Article III, which establishes temporary sign standards for the HARD zone district. The goal of the proposed amendment is to provide additional clarity to the code, eliminate the unnecessary permitting process for certain signs of limited size and quantity, and provide regulations for future temporary signs that will be part of the Gregory Street Plaza and other areas of the City located in the HARD zone district. This amendment will help implement the Gregory Street Sub-Area Plan as adopted as an amendment to the Comprehensive Plan on October 23, 2013, by Resolution No. 40-2013. Black Hawk City Council approved CB23 unanimously.

The Black Hawk Business Improvement District (BID) was organized by Councilman’s Bill Number 26, Ordinance Number 95-8 of the City of Black Hawk on July 26, 1995. Under that Ordinance and subsequent enactments, the Board of Directors of the District has been appointed by the City Council. All Board members must, by law, be electors of the District. The BID currently has a vacancy on the Board of Directors that is required to be filled by the City Council. Based upon the recommendations provided by owners of taxable property in the BID and other information available to the City, and finding that there is presently a vacancy to be filled on the BID Board, pursuant to Section 31-25-1209(1)(b), C.R.S., the City Council hereby appoints, Dodd Hanneman, General Manager of Z Casino, to the office of Director of the BID. Mr. Hanneman has been confirmed by the BID Board at their October 22, 2019 Board meeting with a unanimous recommendation for appointment.

Black Hawk City Council approved Council Bill 26 which is an Ordinance approving the FTA Section 5311 Operating Grant between the Colorado Department of Transportation, Division of Transit and Rail and the City of Black Hawk dba Black Hawk and Central City Tramway for 2020 as presented by Public Works Director Tom Isbester. The City was successful in receiving an award for operating funds through the FTA 5311 program administered by CDOT. This is a 50% match grant, not to exceed $112,890 from the grant. The intent is to apply for reimbursement for a portion of the contract operator costs each month until the grant is exhausted. The City has successfully utilized a similar grant for 2018 & 2019.

Baseline Corp. Planning Tech Melanie Nieske presented a Resolution for a Certificate of Architectural Compatibility for a Comprehensive Sign Plan for the Canyon Parking Lot at 131 Main Street. The City of Black Hawk has received an application from Angela Renfro of BSC signs on behalf of Jacobs Entertainment, requesting a Certificate of Architectural Compatibility for a Comprehensive Sign Plan. The application proposes new parking lot signage for the Canyon Parking Lot located at 131 Main Street. The parking lot is intended to provide a place for patrons that visit the Gilpin Casino and The Lodge Casino a close place to park. The CSP proposes four (4) new signs promoting the parking lot for use by The Gilpin Casino patrons; one (1) double-sided monument side with internal illumination, one (1) single-sided monument sign with internal illumination, and one (1) information sign panel designed to be mounted on a nonexistent gate arm. The applicant has acknowledged that this gate will require a Certificate of Architectural Compatibility (COAC) which is needed before installation. The parking lot will provide 204 parking spaces when it is completed. Black Hawk City Council approved Resolution 76-2019 unanimously.

Black Hawk City Council also approved a Resolution for a Certificate of Architectural Compatibility for a Comprehensive Sign Plan for the Dakota Parking Lot at 245 Main Street as presented by Ms. Nieske. On August 23rd, 2019, the City of Black Hawk received an application for a Comprehensive Sign Plan (CSP) from Angela Renfro of BSC Signs on behalf of Jacobs Entertainment. The intent of the CSP is to provide parking lot signage for the Dakota Parking Lot located at 245 Main Street. The parking lot is intended to provide a place for patrons that visit The Lodge Casino a close place to park. The CSP proposes three (3) new signs promoting the parking lot for use by The Lodge Casino patrons. Two (2) of the proposed signs are located on one (1) freestanding structure. The third proposed sign is designed to be mounted on a non-existent parking gate arm. The applicant has acknowledged that this proposed gate will require a Certificate of Architectural Compatibility (COAC) which is needed before installation. The parking lot provides 66 parking spaces. This submittal proposes the addition of 32 square feet of sign area. The property is allowed 172.8 square feet of sign area.

Black Hawk City Manager Stephan Cole announced that a $300 Holiday Bonus will be awarded before Thanksgiving to Black Hawk employees.

Black Hawk City Council made a motion to go into Executive Session per CRS 24-402(4)(b) to confer with an attorney for the local public body for the purposes of receiving legal advice on specific legal questions.

The next opportunity to participate in the Black Hawk City Council meeting will be December 11, 2019 at 3:00 p.m. at 211 Church Street, Black Hawk, Colorado. For more information visit http://www.cityofblackhawk.org.