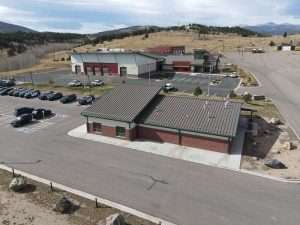 The Black Hawk City Council held their first in person meeting in over a year on May 12, 2021 to discuss officially adopting the State’s 2020 Model Traffic Code, to consider a motion for cost sharing of the Miner’s Mesa sewer line, and to finalize a contract for the Green Lake intake project.

City Attorney Hoffmann asked Council to declare any Conflicts of Interest on any issue appearing on the agenda other that than those already disclosed and filed with the City Clerk and Secretary of State. There were no objections from the City Council or from anyone else in the Council Chambers.

Black Hawk City Council approved the meeting minutes from the April 28, 2021 regular meeting with no corrections or amendments.

Council approved an Ordinance repealing and reenacting Sections 8-1 and 8-2 of the Black Hawk Municipal Code and adopting by reference the 2020 Model Traffic Code. Currently the City of Black Hawk utilizes the 2018 Model Traffic Code. The adoption of the 2020 Model Traffic Code will bring the City of Black Hawk’s traffic code in line with the current State traffic laws. As per Ordinance Codes Adopted by Reference of the Colorado Revised Statutes, the introduction of this Ordinance was approved by Council at their April 14, 2021 meeting and notices were posted in the Weekly Register-Call on April 22 and April 29, 2021.

A Resolution amending the City of Black Hawk 2020 Budget was considered by Council which included the 2019 Adopted Annual Budget of $13,750,000 for the Gregory Street Plaza project. On September 25, 2019 City Council approved Resolution 62-2019 awarding the project to Roche Construction with a Guaranteed Maximum Price of $12,605,752. As of the end of 2019, only about $600,000 had been completed. This amendment to the 2020 Budget simply moves a portion of the 2019 funding forward to 2020 to cover the costs incurred during the year. Black City Council unanimously approved Resolution 29-2021.

The City has awarded the contract for a public infrastructure project that includes construction of a new sanitary sewer main line (the “Sewer Project”) to JBS Pipeline. The total cost of the Sewer Project is Two Million Thirty-Six Thousand, Eight Hundred Seventy Nine Dollars and nineteen cents ($2,036,879.19), and with a ten percent contingency such amount is Two Million, Two Hundred Forty Thousand, Five Hundred Sixty Seven Dollars and eleven cents ($2,240,567.11), and by previous agreement with the Black Hawk-Central City Sanitation District (the “District”), the City is obligated to pay fifty-five percent (55%) of the Sewer Project, and the District is obligated to pay forty-five percent (45%) of the cost of the Sewer Project. Proximo desires to contribute to the Sewer Project in order to accomplish the provision of public sanitary sewer infrastructure to that specific property owned by Proximo located in the City of Black Hawk. The City and Proximo agree that Proximo’s one-fourth (¼) contribution to the Sewer Project, including a ten percent (10%) contingency is $509,219.80 plus a ten percent (10%) contingency of $50,921.98  for a total contribution $560,141.78 (the “Proximo Contribution”). Proximo shall remit to the City the Proximo Contribution no later than May 31, 2021. The City and Proximo agree that the Proximo Contribution shall be the total amount due from Proximo for the Sewer Project. The City and Proximo further agree that the Proximo Contribution shall satisfy any public sanitary sewer line obligations of the Proximo Property. All sanitary sewer obligations in the future related to the development of the Proximo Property not covered by this Agreement shall be deemed private sanitary sewer obligations of Proximo, and nothing in this Agreement shall be construed to address such private improvements to be constructed in the future by Proximo. Black Hawk City Council unanimously approved Resolution 30-2021.

The next Black Hawk City Council meeting will be May at 3:00 pm located at 211 Church Street, Black Hawk. For more information visit www.cityofblackhawk.org.

END_OF_DOCUMENT_TOKEN_TO_BE_REPLACED

Benefitting the county, schools, and much more By Don Ireland   This year marks the 30th anniversary of casinos opening in the former little mining towns of Black Hawk, Central City and Cripple Creek, Colorado. In those early years, smoking was allowed inside ... END_OF_DOCUMENT_TOKEN_TO_BE_REPLACED

Benefitting the county, schools, and much more By Don Ireland   This year marks the 30th anniversary of casinos opening in the former little mining towns of Black Hawk, Central City and Cripple Creek, Colorado. In those early years, smoking was allowed inside ... END_OF_DOCUMENT_TOKEN_TO_BE_REPLACED