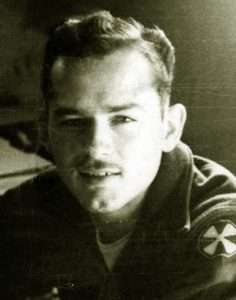 Bennie was born in Council Bluffs, Iowa on November 16, 1934, and adopted by Eva and Bennie Laubhan, Sr. shortly after his birth. He graduated in 1953 from North High School in Denver, and enlisted immediately in the US Army. He served as Supply Clerk and Supply Sergeant for the 78th Field Maintenance Company in Korea in 1954 and 1955, finishing his military service at Fort Hood, Texas in 1956.

Upon his discharge, he followed in his father’s footsteps, working briefly as a structural steel worker in Denver. In 1959, he contacted the governor of the new state of Alaska, asking about the possibility of homesteading there. Despite a positive response from Governor Stepovich, Alaska proved not to be in his future. Instead, Bennie landed a job with the US Geological Survey, where he created topological maps for about a decade. His creativity and innovations won him performance awards while there. Bennie maintained part-time jobs at several service stations throughout the 1960’s, becoming a full-time mechanic and shop foreman after he left the USGS in 1968.

Bennie and the family maintained a presence in Gilpin County over the decades, enjoying ownership of several mining claims in and around Russell Gulch. Bennie retired to the Pogue gold mine, where he followed his many hobbies, including wood and metal working, leather crafting, hunting, reading and general tinkering. He also continued a life-long involvement with Scouting, inviting numerous troops to explore Gilpin County. Health issues forced him to leave his beloved mountain home for lower elevations in 2010.

Bennie married Roberta Ivey on November 15, 1957. They had four children, Zane (Central City, CO), Roben (Colorado Springs, CO), Laurie (Surprise, AZ) and Marlena (Windsor, CO). His wife Bobbie preceded him in death in 1981 from leukemia. In addition to his children, Bennie is survived by numerous grandchildren and great-grandchildren.

END_OF_DOCUMENT_TOKEN_TO_BE_REPLACED

Benefitting the county, schools, and much more By Don Ireland   This year marks the 30th anniversary of casinos opening in the former little mining towns of Black Hawk, Central City and Cripple Creek, Colorado. In those early years, smoking was allowed inside ... END_OF_DOCUMENT_TOKEN_TO_BE_REPLACED