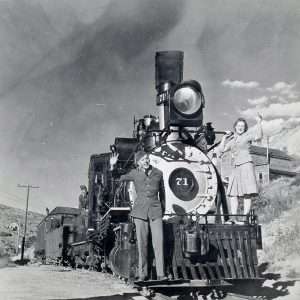 Just prior to the start of the meeting, at 6:58 pm, an impromptu conversation was had between Mayor Fey, Alderman Aiken, and Commissioner Web Sill (Alderwoman Johnson was also in the room) which constituted a quorum. However, the Zoom audio was muted and the conversation could not be heard. Mayor Fey convened a regular meeting of the City of Central Council at 7:02 pm on Tuesday, June 1, 2021, in City Hall Council Chambers. Council members Jeff Aiken, Jackie Johnson, Judy Laratta, Kara Tinucci, and Mayor Jeremy Fey were present. Alderwoman Tinucci attended via Zoom from another time zone.

Mayor Fey led the Pledge of Allegiance and then asked for any amendments or additions to the evening’s agenda. Manager Miera asked that item seven, Resolution 21-15, be pulled from the agenda to be introduced at a future meeting.

Resolution 21-15 would approve a Historic Train Lease between Maverick Gaming dba Grand Z Casino and the City. The City was in a ten-year lease with Grand Z to allow Engine No. 71 to remain on Grand Z property. This would renew said lease. If the engine ever needed to be removed, it would be at the City’s expense. This item was pulled at the request of the property owner until they have more time to consult legal counsel.

Council moved to remove this Resolution from the agenda.

The Mayor called for a motion to approve the consent agenda which consisted of the minutes from the May 18 meeting and regular bill lists through May 25. Mayor Fey asked about the expense of $9,731.20 for storm gates on Spring Street saying it doesn’t seem finished. Director Hoover responded that the work is contracted, and they will be replaced in the next few weeks. Alderwoman Laratta moved to approve the Consent Agenda and was seconded by Alderwoman Tinucci. The motion passed unanimously.

Mayor Fey opened the floor to the public for anyone who wished to speak to a topic on that night’s agenda. No one chose to address council.

The Council considered approval on one Resolution and Grant Funding for the Belvidere Foundation.

Manager Miera introduced for the Council’s consideration Grant Funding for the Belvidere Foundation. The Foundation requested funding of $75,000 for operating expenses that would be paid as a grant and not repayable. Staff recommends Council approving the request with the condition that future expenditures by the Foundation would be approved by the City Manager. The current Bylaws of the Foundation require all checks to be authorized and signed by both of the ex-officio members of the Board of Directors which would be the City Manager, Daniel Miera, and the City Community Development Director, Ray Rears, so the request is in-line with the established bylaws. The funding would come from money already set aside for the Belvidere in the City’s budget.

Board Member Peter Droege addressed council and reported that the money would be used primarily for fundraising activities and to create a sales and marketing kit. There are grant opportunities throughout the year they can apply for which require materials and research to be presented.

Board Member Betty Mahaffey addressed council and informed them that two Board members have donated $1,000 each and two others have made a commitment to a similar donation.

Alderwoman Laratta stated, “They have a great crew” about the Belvidere Board members. Alderman Aiken commented that Peter (Droege) is someone who remembers the old days and he is a good person. “I’m really glad to have you on board this thing”, said Aiken.

Alderwoman Laratta moved to approve the grant and was seconded by Alderwoman Johnson. The motion passed unanimously.

Manager Miera advised Council of the resignation of Jonathon Morrison from the Belvidere Foundation Board. His resignation was accepted by the Board on May 25, 2021.

Miera then advised council that they are considering the mask mandate being optional inside City Hall and wanted Council’s opinion. Additionally, the next meeting will be open to the public.

Council was universally in favor of opening up City Hall and access to their meetings.

Sheriff Kevin Armstrong gave an update on COVID and declared that 58% of county residents have received at least their first dose of the vaccine. He also reported that Diane Stundon is on staff for Emergency Management.

Alderwoman Laratta commented that many people think she has been negative lately, “But I really haven’t” and blamed the mask. She followed by saying she is worried about the flowers on Main Street; they are looking very good. She then apologized if she hurt anyone’s feelings with her remarks at the previous council meeting.

Alderwoman Tinucci thanked Alderwoman Laratta about her comments and her apology.

Alderwoman Jackie Johnson Steps Down and Moves Out

Alderwoman Johnson commented that the rumors are true she is stepping down from her Council seat and they are moving from the area. “Some doors have opened for my family and my businesses” and she has decided to walk through them. She then thanked two staff members, City Clerk Reba Bechtel and Community Development Director Ray Rears who encouraged her to get involved. Johnson also commented that she will continue to fulfill her Council obligations until such time as a replacement is elected; however, Council is required to be a full-time resident per City Code, so she will no longer fulfill that requirement.

Mayor Fey opened the floor to the public for anyone who wished to speak to the council on any items not on the agenda. No one chose to address the Council at this time.

Mayor Fey adjourned the regular meeting at 8:32 pm. The next regular Council Meeting will be Tuesday, June 15, 2021.

END_OF_DOCUMENT_TOKEN_TO_BE_REPLACED

Where the dead get to tell their story By Jaclyn Schrock On Saturday, August 21, the Gilpin Historical Society held their annual Cemetery Crawl. Tickets allowed the shuttle of hundreds of guests from the Teller House parking lot to the Cemetery. Depending on v... END_OF_DOCUMENT_TOKEN_TO_BE_REPLACED

Where the dead get to tell their story By Jaclyn Schrock On Saturday, August 21, the Gilpin Historical Society held their annual Cemetery Crawl. Tickets allowed the shuttle of hundreds of guests from the Teller House parking lot to the Cemetery. Depending on v... END_OF_DOCUMENT_TOKEN_TO_BE_REPLACED