Being “resurrected” gives local man a mission in life 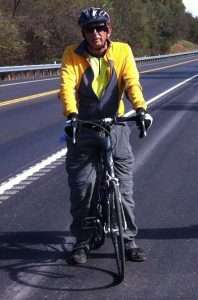 Last July, area resident Jerry Leenheer got struck by lightning, had no pulse for nearly 30 minutes, and was resuscitated by his wife. He felt he had been resurrected and believes that God gave him a second chance at life. Because of that chance, Jerry made a resolution, and he didn’t wait until New Year’s Day 2016 to start keeping it.

In last week’s issue of the Weekly Register-Call, we told of Jerry’s experience and his remarkable recovery. This week, we’ll show how he and his wife Cora Jean have been making a difference in the lives of others.

After the strike, 71-year-old Jerry recovered rapidly in what he and his wife Cora Jean believe was a miraculous way. The two have been Christians for many years. Jerry wondered how he could now live to please God more. It quickly became apparent that their story should be shared with others.

An avid bicyclist, Jerry had made it his goal some time ago to ride across the country in several segments. Each segment would cover 600-700 miles. Jerry had already ridden from Santa Monica Beach in California to Phoenix, Arizona, last January. In May, he cycled on Highway 60 from Phoenix to Texico, New Mexico, choosing that area for its cultural and historical factors. He had planned a third jaunt in October, but the lightning strike made Jerry’s doctor hesitant. Still, Jerry was determined to go if at all possible, especially since he had a new mission in mind.

The doctor finally determined that Jerry could ride, so he began to train on the dirt roads around the Leenheers’ home. Before long, his physical stamina and mental sharpness had returned. He and Cora Jean judged that it was time to start out.

The couple first went to Albuquerque in early October to visit their son and daughter-in-law. They purchased a home that they plan to move to sometime in the next few years. Then they set out on their journey across the Texas panhandle and Oklahoma to the border of Missouri, as originally planned.

It took the couple about three weeks, averaging 30 miles per day. A retired scientist and logical thinker, Jerry developed three objectives for his trip: (1) to enjoy seeing creation at bike speed; (2) to learn some of the history and culture of America; (3) to tell as many people as possible about the miraculous events that brought him back to life.

Cora Jean brought her bicycle and rode a couple of times with her husband, but her main mode of travel was by car, so that they could drive home together at the end of the trip. She performed the essential task of driving ahead to scout out routes for Jerry.

Cora Jean explains that most country roads had good shoulders and not too heavy traffic. But in towns there can be hazards, like narrow roads, curbs, and potholes. Jerry even went through big cities, utilizing their bike paths and museums. He printed out maps using Google Earth and stored them in a pocket in the panniers on his bike.

The farther east Jerry rode, the narrower the road got, but traffic didn’t disappear accordingly. “You keep one eye ahead and make frequent checks in the rearview mirror. If there are two big vehicles passing each other, you get off into the grass. On one stretch of 20 miles, I had to bail ten times.”

Jerry had his first crash on this trip, and it had nothing to do with traffic. On one stretch, the road was good, with a wide shoulder. Construction workers had started putting down a new layer of asphalt and hadn’t graded it completely. There was a ridge, but Jerry didn’t see it. He hit the ridge going about 15 mph. “My bike and I went in the air, and I came down on a grassy slope with my helmet bouncing along the grass. I’m just getting over sore ribs!”

Each day was a bit different. Sometimes Cora Jean would pick up sub sandwiches and the couple would lunch together in a park. Or, she would do something for the day that appealed to her separately, like hiking at a state park or visiting a historic site. The couple stayed in motels at night.

In keeping with Jerry’s goal to share his story, they tried to be sensitive for the right time to reach out to others.

“God led us in decisions on how to spend each day. We prayed at the beginning of the trip for God to send opportunities. We didn’t push for them,” Cora Jean says. They discovered a couple different reactions to Jerry’s story. Some folks were skeptical but could not deny what had happened, while Christians who heard about the Leenheers’ experience were encouraged in their faith.

Cora Jean recalls, “One day I was at a state park at the visitor center. The ranger struck up a conversation with me, asking why I had come to the park. I told her of Jerry’s bike ride and his return from death after the lightning strike, and she began crying. ‘God sent you here today,’ the ranger sobbed. ‘I got a call from my doctor.’”

The ranger revealed that a bone scan had shown lesions that needed cancer treatment. She had been praying for some encouragement and believed that God had answered her prayer by sending Cora Jean.

Another encounter came in Amarillo, Texas, where they met up with their daughter-in-law’s father. He urged them to talk to the receptionist at the Motel 6 where they were staying. “She really wanted to hear our story. We told her, and she was blown away,” Jerry notes.

At the Cherokee Heritage Center in Tahlequah, Oklahoma, they viewed the Trail of Tears exhibit with a Native American guide. (The exhibit explores the forced removal of Cherokee ancestors from their indigenous territory to the “Indian Territory” of present-day Oklahoma.)

“It’s an exceptional tribe, a Christianized nation,” the Leenheers relate. “They still have ties to Christianity. We were the only two people on tour with our guide. We shared our story with him, and he affirmed his belief in God. It worked out well, as the next tour had two busloads of school kids.”

Jerry and Cora Jean managed to fulfill their goals of viewing creation and learning about different parts of American culture, too. They recount portions of earlier legs of their journey. “Historic Highway 60 went through older parts of the country, going back in time, with kitschy places like Indian teepee motels.”

Jerry’s trail through Arizona’s Salt River Canyon wound through the Apache Indian Reservation. His mental image had been of a short, squat people; in fact, they were tall ranchers.

At a church service in Showlow, Arizona, the congregation was invited to take home extra eggs and apples that someone had brought. “Just like our church in Black Hawk!” Jerry chuckles.

They look back on the time when Jerry nearly became a movie extra. He was riding through the grasslands southeast of Albuquerque and came across a closed road. It seems that actor Jeff Bridges was there filming a movie called “Comancheria.” Unfortunately, the director didn’t want to write a random bicyclist into the scene.

Two legs remain of the coast-to-coast adventure. On the next section of the ride, the Leenheers plan to go across Missouri and part of Kentucky. The last portion will take them the rest of the way through Kentucky, and ultimately to Virginia Beach, Virginia. Happily, it looks like they will be able to fulfill this dream.

As a scientist for over three decades, Jerry always thought he might possibly be recognized for his research. He never dreamed he would be accidentally famous.

“People will come up to me and say, ‘Aren’t you the guy that was struck by lightning?’”

His nine-year-old grandson Lucas has an amusing insight: “Well, Grandpa, things don’t always turn out the way we expect!”

The Leenheers would agree. Jerry and Cora Jean are ready to meet the adventures that await them. After all, there are still miles to go and divine appointments to keep.

END_OF_DOCUMENT_TOKEN_TO_BE_REPLACED

Benefitting the county, schools, and much more By Don Ireland   This year marks the 30th anniversary of casinos opening in the former little mining towns of Black Hawk, Central City and Cripple Creek, Colorado. In those early years, smoking was allowed inside ... END_OF_DOCUMENT_TOKEN_TO_BE_REPLACED

Benefitting the county, schools, and much more By Don Ireland   This year marks the 30th anniversary of casinos opening in the former little mining towns of Black Hawk, Central City and Cripple Creek, Colorado. In those early years, smoking was allowed inside ... END_OF_DOCUMENT_TOKEN_TO_BE_REPLACED