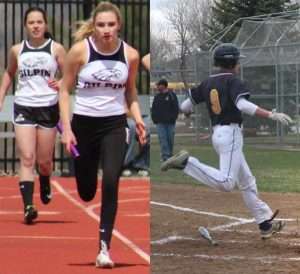 The Gilpin Eagle baseball team battled the Lyons Lions on April 15, soaring to a sweet 9-3 conference victory. It was the first win for the Gilpin ball club this season. The Eagles also played the Highland Huskies of Ault and the Longmont Christian Warriors last week.The Eagles lost both of those games, but the young team is improving and adding more points to its score with each matchup. Gilpin has a lot of freshmen and sophomores on its crew this season, several of whom have not played before. So, it’s a year to learn and grow and develop endurance.

The Gilpin team and fans alike were well pleased with the performance at Lyons. The teams both started with 2 runs in the first inning, then went scoreless until the fourth, when Gilpin exploded with 4 runs. They filled in the scoreboard with 2 more runs in the fifth period. The Eagles and Lions both tacked on another run in the seventh. #9 senior Chad Holmes, #15 senior Cooper Lindberg, and #14 sophomore Blake Boulter each came in with 2 runs. #4 senior Angel Gomez, #10 sophomore Triston DiPasquale, and #20 senior Will Lorenz added 1 run apiece. Boulter was lead hitter with 3 and also had 12 putouts. #21 sophomore Nolan Lindberg had 2 runs batted in. Lorenz was the winning pitcher and stole 5 bases.

The clash with Highland was a conference game played in Ault on April 9, with the final score 5-2 in favor of the Huskies. Gomez scored both runs for the Eagles and garnered 3 stolen bases. Lorenz was named Player of the Game for Gilpin, with 1 hit, 2 put-outs, and 2 assists. He also pitched, striking out 10 batters. Boulter contributed 8 put-outs.

Longmont Christian triumphed on their diamond 19-6 over the Eagles on April 12 in conference play. Holmes was selected as Gilpin’s Player of the Game, helping the Eagles with 1 hit, 1 stolen base, and 4 putouts. Those scoring for Gilpin with one run each were Lindberg, Lorenz, DiPasquale, Boulter, #2 sophomore Braden Harris, and #5 sophomore Dallas LeBeau. LeBeau, Rodriguez, Boulter, and Lindberg took turns on the pitcher’s mound.

The Denver Christian Invitational meet took place on April 13. Gilpin boys placed 15th of 17 at the non-conference event. Stephen King distinguished the Eagles with a first-place win in the 300-meter hurdles with a time of 44.29. The boys’ relay team grabbed a 7th-place berth in the 4×100-meter race with a time of 50.70.

END_OF_DOCUMENT_TOKEN_TO_BE_REPLACED

Where the dead get to tell their story By Jaclyn Schrock On Saturday, August 21, the Gilpin Historical Society held their annual Cemetery Crawl. Tickets allowed the shuttle of hundreds of guests from the Teller House parking lot to the Cemetery. Depending on v... END_OF_DOCUMENT_TOKEN_TO_BE_REPLACED