Basketball season delayed due to Covid-19 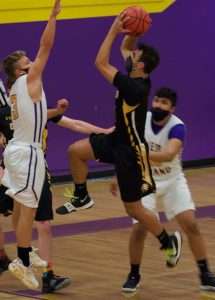 High School basketball faced a late start this 2020-2021 season due to constraints stemming from the Covid-19 pandemic. Covid protocols in compliance with Federal and State mandates were adopted at the Gilpin County School level and by the Colorado High School Activities Association (CHSAA), which directs high school athletics competition. Colorado High School teams were not allowed to begin CHSAA competitions until late in January of 2021. This resulted in a flurry of games scheduled to compensate for the early season games that were cancelled or delayed. Covid-19 protocols sometimes differ between schools depending on how the school’s and CHSAA’s protocols are implemented ranging from allowing a restricted number of attendees, to not allowing any spectators at home games.

The Gilpin County High School Eagles basketball season began on January the 28th with a boys’ varsity game against West Grand High School in Kremmling, CO. Six more games were scheduled and played during the following two weeks ending with a game vs Highland High School played on January the 13th. Following is a summary of each of those games.

The Eagles varsity boy’s first game of the season was a non-conference game played in Kremmling, CO against the West Grand Mustangs on January 28th at 7:00 pm. Only a limited number of pre-approved spectators were allowed to attend with screening for Covid-19 symptoms at the door and were required to social distance and wear masks at all times. The athletes were also required to wear masks even while playing.

The Eagles came out strong leading the Mustangs by 7 points at the end of the 1st quarter. The Eagles led in points at various times during the 2nd and 3rd periods but trailed by only 1 point at the end of each of the middle periods. In the 4th quarter, with just over 2 minutes left on the clock, Blake Boulter (25) sunk a 3-pointer to make the score 48-46 Eagles. The Mustangs answered with a 2-pointer and a free throw to pull ahead by 1 point. Eagles Stephen King (4) drew a shooting foul and responded with 1 point on a free throw tying the score at 49 to 49.

The Mustangs followed up with a 2-point field goal followed by 2 free throws by the Eagle’s Boulter (25) tying the score at 51 to 51 with 40 seconds left in the game. In the last 34 seconds of the game the Eagles committed 2 fouls resulting in the Mustangs scoring 3 points in free throws ending the game on a score of Eagles 52 to the Mustangs 55.

Trey Lindberg (3) and Stephen King (4) lead the Eagle’s scoring with 14 points each followed by Nolan Lindberg (24) with 13 points and Blake Boulter (25) with 11 points. Blake Boulter led the team with 12 rebounds, 4 assists and 4 steals.

The Eagle’s second basketball game of the season was a non-conference game played on the Eagle’s home against the South Park High School Burros. Due to school covid-19 policies at the time no spectators were allowed to attend.

The Eagles ended the first quarter trailing the Burros by 4 points on a score of 4 to 8. By the end of the second quarter the Eagles had cut their deficit to only 1 point with the score at 17 to 18. In the 2nd half the Eagles came out fired up and scored 21 points to the Burros 6 in the third period establishing the score at 38 to 24 Eagles. In the final period of the game the Eagles scored 16 points holding the Burros to only 3 points winning the contest making the score 54 to 27 in favor of the Eagles.

Blake Boulter (25) and Stephen King led the Eagles in scoring with 17 points and 11 points respectively. Boulter (25) also led the team with 14 rebounds, 2 assists and 6 steals.

The Gilpin Eagles played a non-conference away game in Denver against the Rocky Mountain Lutheran High School Eagles on Monday, February the 1st beginning at 5:30 pm. Due to covid-19 safety protocols spectators were not allowed to be present.

The Gilpin Eagle’s top scorer was Stephen King (4) with 24 points followed by Trey Lindberg (3) with 15 points. Boulter led the team with 11 rebounds, 5 assists and 4 steals.

The Gilpin Eagles boys’ varsity played the Front Range Christian High School Falcons on Friday, February12th at 6:00 pm on the Eagles home court. Only one pre-registered spectator per player was allowed to attend the game due to Covid-19 restrictions.

In a low scoring 1st quarter the Eagles outscored the Falcons 8 points to 5 points. In the 2nd quarter the Eagles increased their lead to 8 points establishing the score at 23 to 15. In the 3rd quarter the Falcons scored 2 more points than the Eagles, leaving the Eagles to maintain a 6-point lead on a score of 30 to 24. In the final period, the Eagles maintained their lead for the first 3 minutes. The Falcons tied the game at 32 to 32 with 5:05 remaining on the clock. During the final 5 minutes of the game the score was tied six separate times as the lead switched between teams as many times. Eagle’s starter Stephen King (4) fouled out in the last several minutes of the quarter leaving the team to draw from the bench. The final quarter ended in a tie at 46-46 throwing the game into a 4-minute overtime. With a little over a minute left in the overtime and with the score tied at 53 to 53 the Falcons connected with a 3-point field goal after which they drew 2 fouls from the Eagles connecting with one free throw on each foul. Finally, as the Eagles conceded with about 1 second left and were leaving the court, the Falcons took a free layup to end the game at 60 to 53 in favor of the Falcons.

The Gilpin Eagles boys’ varsity played its fourth conference game against the number 2 ranked team in the 3A/2A/1A Mile High League on Saturday, February the 13th at 6:00 pm. The game was played on the Eagle’s home court with only one person per player allowed to attend in compliance with the school’s Covid-19 policy.

END_OF_DOCUMENT_TOKEN_TO_BE_REPLACED

Where the dead get to tell their story By Jaclyn Schrock On Saturday, August 21, the Gilpin Historical Society held their annual Cemetery Crawl. Tickets allowed the shuttle of hundreds of guests from the Teller House parking lot to the Cemetery. Depending on v... END_OF_DOCUMENT_TOKEN_TO_BE_REPLACED